it's bayer, just look at this shit. they had medicine infected with AIDS that they couldn't sell in the U.S. so they dumped it on poor people overseas.


Soon after the settlement, because the New York state statute of limitations required people to file a lawsuit within three years of discovering an illness, New York Governor George Pataki signed a bill allowing people infected by blood products, or their survivors, two years to bring product liability suits against the manufacturers.[9] The settled class members are barred from filing suits against the companies, however the bill allowed an estimated additional 75 eligible to file suits.[9]

Bechtel, the answer is Bechtel. The fact that the corporation responsible for the Big Dig, the post invasion reconstruction of Iraq, and the Katrina cleanup can still be turning a multi-billion dollar profit every year is a testament to how many Americans don't give a fuck and don't care to ever give a fuck. They privatized the goddamn water supply in Iraq.

No, I'm sorry it's Blackwater.

They simultaneously employ their workers as contractors and salarymen so they can avoid any responsibility for their actions while retaining complete control over what they do. Blackwater's contracts routinely include clauses such as :

Basically, their contracting system holds you in a state of legal servitude until you quit, and if you have a problem with Blackwater they will sue you until the problem goes away. Who remembers this picture: 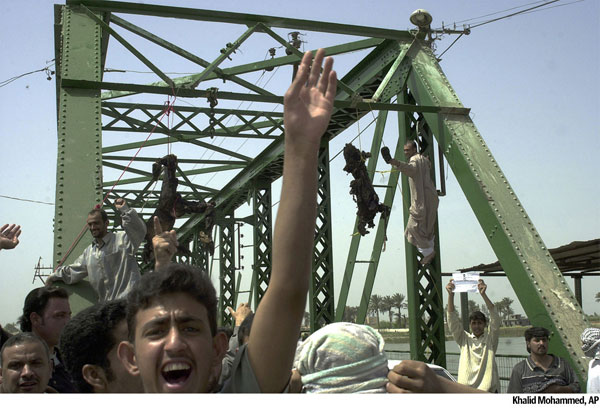 Right, those are two Blackwater contractors who drove through the middle of Fallujah in a jeep and got murdered. Turns out their superiors at Blackwater ordered them to do the run, even though they objected, and the US Army deemed it "operationally dangerous" and refused to allow soldiers to enter. Blackwater also failed to provide a heavy gunner who was promised to the men to safeguard their trip. As a result, and the fact they couldn't refuse the order without bankrupting themselves and their families, they ended up like that.

Naturally, when this came to light, the families of the men were upset because Blackwater failed to adequately safeguard the lives of its men and openly lied to them about the working conditions. They opened legal action against Blackwater for negligence and wrongful death. In reply, Blackwater refused to release their dead husbands back wages (some collected during the run they died doing) and filed suit for breach of contract and a bunch of other legal mumbo-jumbo like the cost of their defense and shit.

As a result, they pointlessly lost their husbands due to corporate negligence, have not been paid the monies owed them, and are being sued to the tune of millions for holding the company to account for its failures.

This thread is so depressing.

There's so many that haven't even been mentioned yet:

- Complicity in or direct violations of environmental, labor and human rights in Indonesia, Papua New Guinea, Philippines, Namibia, Madagascar, the United States and Australia, among others.

- Eviction of the local small scale miners in the Kelian gold mine in Borneo. The families were displaced to shanty towns. Followed up in the area with a culture of sexual harassment and rape centered around the company. An independent inquiry determined that victims of sexual abuse had been threatened with dismissal if they did not cooperate or were promised a job or money in return for sex. Rio Tinto didn't inform their shareholders of this finding. (here) and (here)

- In the 70s supported the apartheid government of South Africa through uranium mining operation in Namibia that the UN called 'virtual slave labour under brutal conditions'. These operations, by admission of the company chairman maintained a 'private army' for the purposes of suppressing civil or labour unrest. (here) Keeping large gun happy security forces that are accused of everything between intimidation and outright targetted murder of opposition leaders in communities near Rio Tinto concerns is a practice the company still maintains today.(here)

- Their attempt at greenwashing includes both the typical aesthtic use of landscapes that they are actually in the process of despoiling and also the coining of the oxymoron 'sustainable mining'. (here)

- Under their subsidiary 'Bougainville Copper ltd', through pollution (they dumped the toxic tailings from their mine directly into the main river) and disregard for the local community whilst giving significant amounts of money to the central government they were instrumental in bringing about a full secessionary war in Bougainville in Papua New Guinea. (here) and (here) The area has been completely destabilised for around 40 years now.

The court case still hasn't been resolved (I believe) even though it has been going on since 2000. From the case:

Both Rio and PNG made enormous profits from the mine and were anxious for it to operate, notwithstanding the resistance of the island's people. The blockade prevented medicine, clothing and other essential items from reaching the people of Bougainville. Hospitals were forced to close, women died needlessly in childbirth and young children died from easily preventable diseases. Rio's top manager on Bougainville encouraged continuation of the blockade for the purpose of 'starving the bastards' out. This blockade directly caused the deaths of at least 10,000 people between 1990 and 1997. According to the Red Cross, the blockade killed more than 2,000 children in its first two years of operation. By the time the war ended in 1999, 10% of the population of Bougainville, approximately 15,000 civilians, were killed.

- Oh and last year in one of the most successful years ever for the mining industry as a whole Rio Tinto's earnings were a record US$7,443,000,000.