EXPECTATIONS: There's a stigma that hangs over Tim Burton, with the Internet exploding with cries of "Hot Topic" whenever his name is mentioned. Personally, I have no issues with the man or his career, though that might be because we don't have Hot Topic in the UK. As one of the few people who enjoyed Burton's Charlie and the Chocolate Factory, I stare down the wave of negative reviews that Alice has received and give a silent prayer; "Don't let me down, Burton."

REALITY: You let me down, Burton. 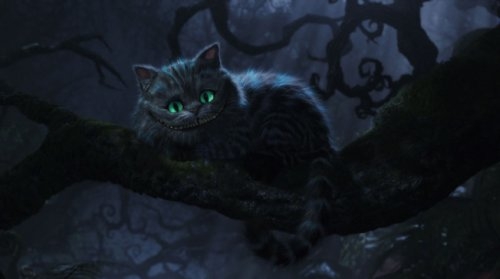 Alice in Wonderland is the story of Alice (Mia Wasikowska), now nineteen years old and expected to marry some cartoonishly wet fop, still dreaming of her time spent down the rabbit hole in Wonderland. Oh that's right, didn't you know? This is actually a sequel of sorts to Lewis Carroll's iconic books, one that borrows just enough elements from the source material to be unoriginal yet not quite enough to be an adaptation. Alice meets up with all the familiar characters, such as the White Rabbit (Michael Sheen), the dormouse (Barbara Windsor), two boiled eggs (Matt Lucas), a kind of bird thing (Michael Gough) and a smoking caterpillar (Alan Rickman). These characters are all captured by the bandersnatch and taken to Big-headed Miranda Richardson (Helena Bonham Carter). Alice then teams up with The Mad Hatter (Johnny Depp) to find the Vorpal sword and kill the Jabberwocky (Sir Christopher Lee), because that apparently will save Wonderland... I mean Underland. 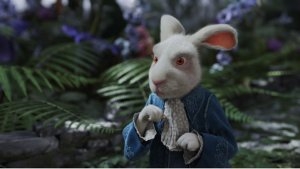 Michael Sheen as the White Rabbit; one of the few instances of a well cast character.There were a lot of characters in that little synopsis, weren't there? Well, that's not all of them by a long shot. We also have The White Queen (Anne Hathaway), The Cheshire Cat (Stephen Fry), the Knave of Hearts (Crispin Glover) and probably some others that I've forgotten about. The problem is that none of these characters get anything interesting to do with their limited screen time. They just appear because they are expected to, and then the film races off toward the next inconsequential encounter.

Most of the "human" characters in the film have some kind of CGI implemented into their appearance to give them their otherworldly looks. Depp's eyes have been enlarged so he looks like Elijah Wood, an effect that's seamless, if unnecessary. What is particularly odd though, is Crispin Glover. His arms and legs have been elongated bizarrely. As a strange kind of marionette riding on a talking horse, he very often looks like a fully animated character with a real person's head stuck on. Finally, watching Helena Bonham Carter perform with a massive head made me realize that you can literally do anything with visual effects these days, but that doesn't mean you should.

It's a shame that the supporting character given the most screen time is The Mad Hatter. Depp gives one of his strangest, most off-putting performances yet, wandering in and out of a vague Scottish accent and generally trying too hard to be odd. Even more unfortunate is Helena Bonham Carter as Big-headed Miranda Richardson; every time she appeared, I was left wondering why they couldn't have just nabbed Richardson herself instead of Burton's wife doing a lazy impression of her.

The casting issues don't end there, either; Hathaway is a really odd choice for the White Queen, reprising the "famous person pointlessly inserted into a bloated ensemble film" role she played in last month's Valentine's Day. Late in the film, the Jabberwocky, previously only heard expressing itself through guttural roars and bellows, suddenly speaks with the refined voice of Sir Christopher Lee. You'd think Burton, as someone with a background in animation, would have a better idea of how to match a voice to a character aesthetic. But the biggest problem is Alice herself. Mia Wasikowska is a kind of blank canvas of drab mediocrity, extolling the virtues of childlike innocence and the wonders of imagination without ever displaying any sense of wonderment or excitement herself. I can't help but feel that the entire film would have been more entertaining with a more energetic lead. You could even argue that she's too old, but that really speaks to a larger issue: The decision to make this as kind of a sequel to the book. 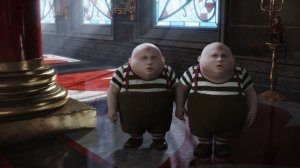 Matt Lucas turns in a very fitting performance as two vague shapes.Alice as a young adult questioning society with a streak of independence anchored by her childish imagination is nowhere near as interesting as an actual child suddenly faced with the impossibility of her own imagined world enveloping her. Ultimately, this leads to some mixed messages about elfin attitudes and female empowerment that leave a sour taste in one's mouth. I've always believed that films for children should carry some message of example, but with something this confused, I can't tell what kids should be taking from it. Should we remain children forever or be fiercely independent businesswomen? Also, by making Alice a young adult, they've alienated much of the audience for whom the source material was intended.

Visually, the film displays flights of whimsy that are occasionally impressive, but they're marred by a terrible implementation into 3-D. Burton chose to shoot in 2-D and convert the film into 3-D in post-production. Because of this, every scene looks like it's composed of rows and rows of paper cut-outs with the occasional long, pointy thing to anchor the effect. If you do choose to see the film, I strongly suggest that you see it in 2-D and save your money. It seems like with his massive budget, Burton could quite easily have used 3-D cameras and made something to rival Avatar's 3-D effects, but this was just another in a long stream of poor decisions.

"Poor decision-making" is the key phrase here. It seems that the best decision you could make would be to give this a miss and hope that Burton sorts himself out for next time. It's okay Tim, I still believe in you.

MINORITY REPORT: I once fell down a rabbit hole, perhaps that very same one, and I too found a world of fantastication. In there it was the most delightful shade of brown, and the landscape was adorned with the bones of my old friends. But far ahead I could see a light, with a small creature hopping toward it. It seemed to beckon me. "Come closer, Monty," it said, "Come closer." As I approached the creature, the little bugger bit me, so I made an example of him! No fluffy bunny-wunny has ever fucked with old Monty Smythe since. What? Tim who? -Montague "Legally Sane" Smythe