Forget all that padding like "story" and "setting" that bogs down traditional role playing games,1984's Heroes Unlimited drops the pretense of context and offers a manual for making any comic book character you can imagine. There is a chapter of game play rules (horrible like all Palladium games), but the rest of this book is the fugue state explosion of Kevin Siembieda's mind as he seeks to codify every possible super hero type and origin without regard to playability. The result is predictably hilarious. 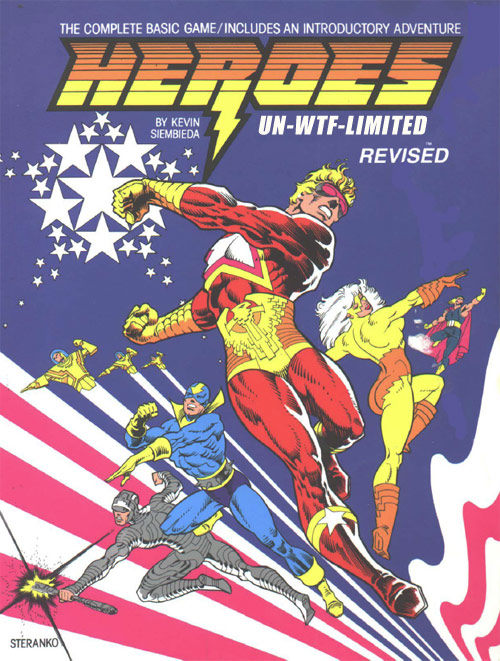 Steve: This is about my number three favorite RPG of all time so I am prepared to get super ticked off at you and your negativity.

Zack: What could I do that would possibly make you angry? All we're going to do is take one of the nostalgic treasures of your misspent youth and dissect it like a pig fetus in search of embarrassing details.

Steve: I spent three years giving Galils and multi-optic helmets to the henchmen of Shadow Black, Prime City's most nefarious super villain who turned out to be an alien cyborg and also Keith's mutant polar bear's best friend from high school.

Zack: You touch on one of the great things about Heroes Unlimited: it includes roughly twenty different types of characters, from aliens, to robots, to mutants, to dudes who just pumped a lot of iron. Pretty much all of these categories include their own weird rules that only apply to that category.

Steve: Exactly, that's why it is frigging awesome. It's like Kevin Siembieda came up with everything that is bad ass about Rifts, but he hadn't come up with the idea of these dimensional rifts opening yet.

Zack: It takes a strong knowledge base of metaphysical bullshit to come up with something like "alternate universes converging."

Steve: It's probably in Heroes Unlimited if you look hard enough.

Zack: If it's shameful then I'm sure we will find it.