Warhammer 40,000 (also known as "40K") is the most popular tabletop wargame of all time. 40K's British maker, Games Workshop, has sold trillions of dollars worth of little pewter and plastic dolls (called "miniatures") and licensed 40K for a dozen or so video games, one or two of which were not offensively terrible. The ultra-violent distant future setting of 40K weaves together Tolkien, Christian mysticism, anime, and everything else evil in the world. The result is something very grim and very dark indeed, like a black metal video, in space, with angels flying over alien battlefields and millions dying constantly. Warhammer 40,000 is so grim and so dark that skull mountains are a common sight and heroes duel with chainsaws. The 5th Edition rulebook was released in 2008 and is the most recent core rulebook. 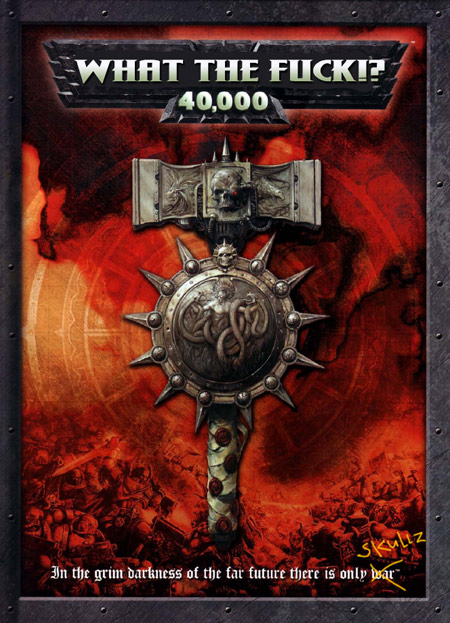 Steve: Could be, I only play it once every couple of months now.

Zack: Well, I haven't played it in several years, but I used to play it quite a bit. I do still buy a book occasionally and I've got half an unpainted Imperial Guard army sitting on the back shelf of my closet. One of these days I'll dust it off and paint it up.

Steve: Oh, that's neat, I have a 3,000 point fully-painted Iron Hands army I put together with a bunch of Forge World bits and customization.

Steve: I've also got a tournament ready 2,000 point Emperor's Children army that I ebayed and then converted and painted.

Steve: I've also been thinking of starting an all Forge World Death Korps Army, but that might be a little cliche. Isn't everyone playing Death Korps now?

Zack: What the fuck did you just say?

Steve: I was reading some tutorials on a modeling website on how to turn some Fantasy stuff into 40K. Make an IG army out of converted Fantasy stuff. Maybe I'll go with that.

Steve: Heh, Space Marines are great if you're just starting out. A really good starting army. Good way to get into the game. For newbies. Easy to paint for kids.

Zack: Steve, are you being a dick to me?

Steve: I'm sorry! I don't know what came over me. Something about the grim darkness just took hold of me.