BiGDOG's Dog Blog: Bark If Ya Hear Me

Gotta say, BiGDOG is touched by the huge outpouring of support. I haven't been blogging much due to my ulcer, but I'M BACK. I'm back everywhere, baby! All those ninnies attempting to sit on my free speech rights have been put in their place. You can't put truth in the doghouse!

Look for my posts on all the dog sites. BarkWire, thedogspot, K9Connect, and the Woofable Forums. I'm back to preaching the good word and laying out the knowledge.

Filed under: tellin' it like it is. 0 Comments posted. 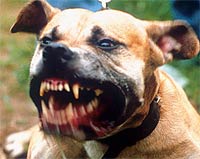 Anybody following the current dog situation in town knows all about Tetanus. He's one of El Cráneo Negro's most trusted lieutenants. A brutal enforcer with no mercy, Tetanus has been instrumental in helping his boss take control of the city streets. He also has quite an appetite when it comes to bitches. He's already turned out Homestead, and word has it he's set his sights on Tenacity. No doubt about it, there's a political angle to that scheme. Tetanus wants to push the buttons of a certain black lab.

While I respect the cleverness of his game, I'm declaring Tetanus Worst Dog of the Week because he left a big stinking mess near my mailbox. F U, DOG. 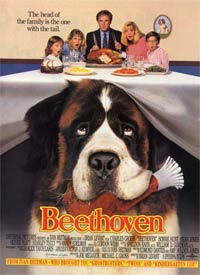 As good as it gets.Turns out the idiots in Hollywood are making a new Beethoven movie. Normally this would be great news, except for one horrible mishap: NO CHARLES GRODIN. If you're like me, you watched (and loved) the first two Beethoven films for the hilarious chemistry between Beethoven and Charles Grodin's character George Newton. Let's forget the Beethoven's 3rd-5th suffered from having Judge Reinhold replace the incomparable Charles Grodin. I've always said that Charles Grodin is like the Panzer of the acting world.

The other thing to keep in mind is that the dog that played Beethoven is dead, and I have a hard time imagining the new dog will capture all the original's subtle nuances. Hollywood had a chance to reboot one of its most enduring franchises for a new generation, and it looks like they completely blew it.

BiGDOG recommends everyone boycott Beethoven's Big Break. Save your money and rent the first two films. BiGDOG guarantees you won't be disappointed.

Filed under: beethoven, charles grodin, tellin' it like it is. 0 Comments posted.