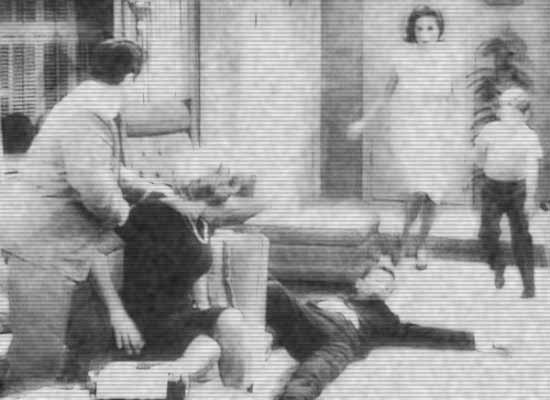 Dad insists on coming home early from work when he hears about what I saw in Mrs. Harding's backyard. He is very angry for some reason. I can hear his voice on the telephone from across the room. Mom cries and cries, which makes me cry.

When Dad gets home he stops in the doorway and stares at Mom. He looks so mad in a way I have never seen before and never will see again. I don't know why he is so mad, but I know that later I will understand. She stares right back at him, even madder than he is.

Neither one of them says nothing for a while.

Finally, Dad takes a knee and wraps me up in his big arms. He holds me so tight against his chest that his tie clip makes a mark on my forehead. The air tastes like the mothballs from the closet. I start crying again and make a wet face mark on his brown blazer.

He lets me go, but then tousles my hair like Sheriff Oates did.

"Go play upstairs for a while," he says. "Your sisters will be home soon."

I go up to my room like he says, but I don't feel like playing. We have TV dinners for supper. At the table Tara says that her friend Audrey saw one once coming out of a sewer. She says they eat cats and dogs. Dad tells her to shut up, which is a bad word we're not allowed to say.

School is closed down the next day because of what happened two towns over in Fort Kinsey. An accident with a bunch of kids, but the news man won't say exactly what happened. I know later. Much later. How do I know?

At night I lay in bed with the door open. There are June bugs on the screen. The rasping of their little claws on the metal keeps me awake. But that's not really it.

It feels like it's floating just outside my window in the darkness. The eyes are wet and shiny. There's still all those muscles attached to the back, like the cord to the TV. Plugged into a brain that looks like it's in a clear bag of juice. Still thinking. The heart makes a sound like a mouse in the grass. Still beating.

I scream and cry. Mom and Dad are there in seconds, but it doesn't matter.

The next day I am tired and cranky. I drag my blanket with me down to the couch and refuse to eat pancakes. I watch TV, but infodots and bulletins keep interrupting. Sheriff Oates comes on the TV's special channel and tells everyone to spend the day at home.

We watch videotapes of cartoons all morning. We listen to records and play games. Heather cheats at Monopoly. Dad says he'll play Moon War. He says I look glum and he knows it's my favorite game. I like the big foldout map of the moon and the little plastic figurines of the astrotroopers.

I don't feel like playing it. I know that I will never play the game again. The box will still be in the closet of my bedroom, sitting at an angle on top of an old pile of Mad Magazines sixteen years later. I'll find it when I come home to bury Dad.

Mom will say that I should take anything I want from the room while I am home. She wants to put her sewing machine in my room. I'll see the box in the closet with its cartoonish cover, an astrotrooper blasting an unfolder with a gyrojet rifle.

The red and orange unfolder figurines will spill out of the tray into the garbage can. The last time I see them they will be covered with coffee grounds.

I know all these things and it fills me with a terrible sadness. Why do I see them so clearly? Like I remember things that haven't happened.

I tell Dad we can't play Moon War ever again and I run upstairs crying.