Oh waaaaah, I'm tired of living under the shadow of Pink Floyd, waaaahhh, stop comparing me to Pink Floyd. Yeah, maybe we'll stop comparing you to Pink Floyd when you stop fucking trying to be Pink Floyd, you long haired hippie dorks. I don't know quite by what fluke you wound up with the biggest fan base of nerds since Star Trek, but enjoy it while it lasts. And stop trying to fucking experiment with new sounds and go back to being the poor man's Pink Floyd, because that's what brings home the bacon, idiots.

New Order. You sucked so bad the first time around that your singer killed himself. Why keep trying? Going from a gothy band to writing fucking club music and soccer anthems? Way to stick by your convictions, boys. Maybe you were just poseurs all along. Oh shit, wait, I take that back, I can't make fun of you or else the hipster mafia will burn down my house.

Siouxsie Sioux is like a terrifying version of Cher for younger and creepier people. I shudder to think what she'd look like without the makeup; maybe if she took it off we'd find out she's been Robert Smith all along (note: photograph below is a clever fake). 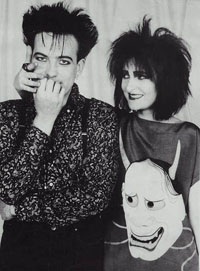 Oh shit, I hadn't realized there were two of them until you posted their names side-by-side!

Yeah, way to go Wu Tang Clan, if I get 9000 rappers in a room together at least a couple of them are bound to have some talent, right? Too bad it's fucking ODB who still makes headlines with his filthy messes.

Eminem is the biggest pussy in all of music history. More of a pussy than Dave Matthews. More of a pussy than Jack Johnson. You stupid little bitch, you have to have a posse to protect you from a fucking cartoon dog on national TV. You pick fights with Moby, the smallest and meekest man on earth. Maybe all those beatings you took in grade school didn't sink in. I pray that someone dishes you out a beating that sticks someday soon. Oh, and you can make fun of people and parody them in your videos all you want, but Weird Al tries to do it to you and you say some shit about your legacy? A legacy of being a wimpy little shit who can dish it out but can't take it.

I'm glad not all musicians are "geniuses," or else I wouldn't listen to music at all.

It must be hard to play guitar with wrists that limp. I have to say that they went from being incredibly popular with indie types to fading into irrelevance and obscurity amazinly fast for a band of their popularity. It's really quite a feat. Also, why the fuck did they let that "other" guy sing? I know he sings on only a couple songs, but just those few songs are enough to make me want to amputate his vocal cords with my shoe.

They're one of those bands who's sort of like Oasis. Everyone in their home country, for some unexplainable reason, loved them even though they clearly sucked balls. And then, long after they stopped being even remotely popular in the states, their home country kept buying their records and pretending they still existed. No, Silverchair, you don’t still exist, the USA is done with you and you're fucking gone forever. Stop trying to come back, you worthless little skinny twat, you can cut your hair all you want but we'll still know who you are. 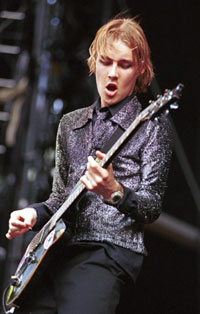 Impper requested:
Do Creed, just for laughs, since I haven't seen it yet.

Here is a brief list of things that ROCK HARDER than Creed:

1. Sunday brunch.
2. Spending a lovely evening with your grandmother.
3. Henry Mancini.
4. An ice-cold Shirley Temple with a cherry on top.

The man's songs are about as interesting as a mayonnaise sandwich. He's got that fucking acoustic guitar, that fucking put-on accent from god-knows-where, and not a single shred of talent to back them up. If I hear anyone else say he's a genius acoustic guitar player I'll slit their throats. Firstly, all of his songs sound the same. That's not the mark of a genius. Secondly, he's just banging out the same fucking rhythm guitar bullshit on every one, he might as well be playing a fucking washboard. Yes, he's a great acoustic guitar player if you're a tin-eared stoned frat-boy who loves to pick up a guitar and woo some fat girls at shitty keggers.

AquaVita requested:
Dredg. You simply cannot possibly tear this band apart. Believe me, I'm better at snobbishly tearing up bands then you are, and I can't find anything wrong with them

Okay. Right. You're better at snobbishly tearing down bands than me, but you can't think of ANYTHING wrong? I find that pretty fucking hard to believe. I've never even heard of this band, but you presented an interesting challenge, so I looked them up on The All Music Guide.

Now, I've never even heard them, but just by reading the info on one fucking album I hate them already. Check out this tracklist:

Okay, who do these dumb motherfuckers think they are? Album fucking divided up into movements? With an intermission? And a fucking 20 minute jam session at the end? Okay, either they're the greatest geniuses in the history of rock music or this record is totally laughably pretentious. Since I've never even heard their name mentioned by anyone in my life, I'm assuming that they're not the greatest geniuses in the history of rock, because if someone actually pulled that bullshit off they'd be fucking gods. Since the record got 3 stars and the review contains this quote: "...singer Gavin Hayes outlines a story of a wanderer's search for and attainment of redemption," maybe they’re not gods. Ooh, so it's a grunge-metal concept album! Sounds just absolutely fucking peachy. I'll be sure to go out and buy all their insane bullshit right away.

Depeche Mode has always been like New Order except with more money for slick studio production but far less actual ideas or talent. They're just a bunch of homosexual heroin addicts singing about how gloomy their lives are. Guess what, kids, stop doing heroin and being in a shitty band and maybe things will get a whole lot better! Poor bastards though, they never get a clue. This is evidenced by the fact that their albums still sound like sort of a watered down version of something you vaguely remember from the 80s.