Seriously, I want to know, is the lead singer retarded? I have never seen any evidence at all to the contrary. If you read a fucking interview with him, which is a monumental chore in itself, you will notice that he speaks as if he had been kicked in the head by a horse as a child. I'd have to chalk it up to something more than coincidence that he also happens to look exactly like he got kicked in the head by a horse as a child. The disturbing trend continues when you hear him singing and inevitably come to the conclusion that the kick to the head also severely damaged his teeth and tongue, resulting in him singing in an outrageous mongoloid mumbling drawl. The fact that he's an Australian of ill breeding is no excuse. That Crocodile Dundee guy manages to be pretty well spoken despite his mentally crippling nationality. Hey, I have an idea! Let's get a horse and have it fucking kick him in the head again. Either it'll work out like in cartoons where he goes back to normal or he'll die or go into a coma or something and we'll stop having to put up with his horrid Nirvana-ripoff whiny retarded bullshit. Next! 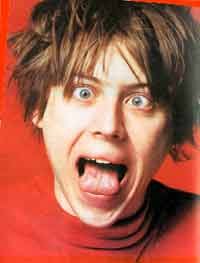 Okay, I see by your taste in music that you're a tremendous fag. So, you like country music but are too much of a pussy to admit it? Let's listen to some trendy bullshit instead. First of all, name 5 good Big Star songs. Yeah, that's right, they're legends and all, but they have maybe 2 or 3 decent songs tops, and if you name any more than that you're stretching it and lying to yourself. Ryan Adams? He's one letter and one album away from being Bryan Adams. Just because you wear blue jeans and have ironic hair and a guitar doesn't mean you're not a cunt. Oh wait, in fact, it practically guarantees that you're a cunt! Wilco! Oh boy, more fucking critical darlings. I don't care how much NPR likes them, their lyrics still read like they're written by a 10 year old and their songs are the height of all boring crap. Uncle Tupelo, of course, is just a primitive version of Wilco, so upon them I lay thrice the scorn.

Remember when I said earlier that the Red Hot Chili Peppers were a band who was easily accessible to people who had absolutely no taste in music and no concept of what art is? Well, Lenny Kravitz does them one better by being exclusively for people with no taste and no appreciation for art. It's simple enough when a band has a million songs that all sound the same but all suck, but Lenny manages to have shitty songs that cover a wide variety of styles and sounds. He's like some kind of Bizarro David Bowie; he manages to absolutely shit all over every genre he can find.

Sigur Ros are so fucking overblown that when I listen to them I feel like going into the studio where they record and taking my boot to their console in hopes of knocking out some tracks from their capabilities. I thought the days where every shitty indie band had to hire a massive fruity orchestra were mercifully over. How wrong I apparently was.

Garbage are pioneers of shitty soulless girl-techno-rock, which is one of the most hideous abominations that the 90s shat out. I don't want to hear lame mechanical beats and the addled crooning of some dumb-as-shit walleyed Scottish high-school dropout. At least the Cardigans managed to only have one hit, mercifully, and then were put out of their misery by the sword of total obscurity. We should finish the job and burn every copy of Lovefool that's ever been pressed.

As for Fatboy Slim, I reserve a special kind of scorn for him. The fucking smug piece of shit makes some of the most hideous "music" that has ever fallen upon my unappreciative ears. Even in terms of shitty DJ crap, he makes the bottom of the barrel. He has no concept of structure. In every song he does he just lays out his hilariously amusing sample at the beginning, puts a beat to it, plays it over and over again, and layers more and more lame effects on it until you want to curse God for inventing sound. He also used to be in the Housemartins, the pitiful bastard.

They may be big fish over in Canada, but here in America we have real rock bands who aren't fronted by skinny, shrieking fruitcakes with bad clothes. So, you know, we don't have to settle for that kind of shit.

Man, Oasis. They just constantly seem to reach new heights of laughable lameness. Their first album was just mediocre rock that took everything from the Stone Roses except charm and talent. The second record of course spawned massively lame hits like Champagne Supernova, Wonderwall, and Don't Look Back in Anger, which certainly take the triple crown of stupidest song titles of all time. Of course, the lyrics were even stupider, if you could hear them through the clumsy Bonehead rhythm guitar and soupy orchestration. "Slowly walking down the hall/Faster than a cannonball/Where were you while we were getting high?" Well I for one am fucking glad I wasn't there while you were getting high, you smug little ogre, because I managed to avoid watching your drug-addled brain pen such remarkable couplets of crap. And of course Be Here Now was even worse. "D'you Know What I Mean" managed to rip off Ride, but without the good guitar playing or majestic sound. In its place was reversed-sounds bullshit, aimless and shitty guitar noise, and more stupid, stupid lyrics. Thank god America stopped paying attention after that album, because if "Go Let It Out" had invaded our airwaves I would have fucking crashed my car just to destroy the radio thoroughly enough to satisfy me. And then of course they lost half their band by being assholes and who did they hire on bass? Andy Bell from Ride, that little sellout shit, he could be playing guitar like a maniac but instead he's playing fucking bass with fucking Oasis. Shame on you, Andy Bell, shame on your annoying Gallagher Moron Twins, shame on you England (note: photo below is the other Andy Bell, because he's funnier). 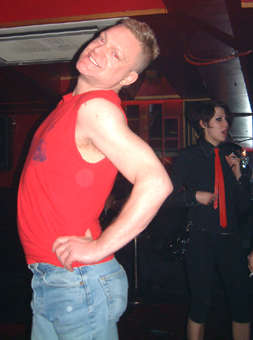 I don't even think she's a human. People (99% girls, the occasional effeminate man) like to insist that she's cute, but if you ask me she's s freaky little elf who should be dissected in some government laboratory. She started out "different" and then veered sharply into "weird for the sake of weird" territory. I'd venture to say that if you're not already on the Bjork train now, you probably never will be.

The Smashing Pumpkins got popular by ripping off My Bloody Valentine, and then made a hideous, sprawling, boring double-disc set where they ripped off pretty much everyone else who they hadn't already ripped off. And, Christ, how the hell did Billy Corgan decide that he should be a rock star? He looked in the mirror and said "Hey! I look like a cross between Nosferatu and a penis, and I sing like Rod Stewart with a severe case of mumps doing a Peter Lorre impression! I've got what it takes!" As for the other members of the band (not that they actually play on the albums), what a bunch of ugly drugged-up losers. And that fucking James Iha dude, remember his solo album? He released some kind of earnest lo-fi bullshit in the vein of Graham Coxon, except that even less people bought it than buy Graham Coxon albums, amazingly.

Hot Hot Heat: How can I rip on a band who's only been around for two weeks (and will probably be around for maybe two more)? Like everyone else in the country, I've only heard that one wildly irritating song of theirs, "Bandages." Oh boy, more indie new-wave copyists. Just what I wanted to hear. Oh, no thank you, I don't want innovation or songs with tunes! I just want another band with shaggy hair and skinny ties to sing their (hold on while I get into Rolling Stone critic mode) "fractured, irreverent pop songs!"

SFA have been pulling out the wacky Brian Wilson card on their new record, haven't they? It's been the downfall of a lot of bands. You see, what happens is they release their Brian Wilsoney record, and people think it's genius for about three months and then realize it's absolute bullshit and never listen to it again. See also: Flaming Lips, Mercury Rev. Also, they're fucking WELSH.

Is Cornelius that horrible Japanese noisy shoegaze bullshit fiesta? The only good band ever to come from Japan was Guitar Wolf, and they're only good because you can snort derisively at their shitty music. I don't need to buy Cornelius records, I have a guitar and I can lean it up facing my amp and turn it up to full volume and get ear-splitting, neighbor-infuriating guitar noise for free.

Now, James is ironic in that one of their biggest hits was "Laid," which was sung by a man who is more obviously a virgin than anyone else in the music industry. He makes Weird Al look like fucking Don Juan. Yeah, "Laid?" No fucking way. "Born of Frustration" probably hits closer to the mark. Oh, and his fucking ninny shrieking in that song is unbearable, it sounds like he's screaming in terror because he's being chased around the studio by a bee.

Sorry, don't know much about Neutral Milk Hotel except that they might be on that shitty Elephant 6 label which seems to be the basis of some scene involving really anemic sounding lo-fi bullshit listened to by weak, skinny nerds. Remember that dude Barry from High Fidelity, who was all quiet and frail? He's the kind of kid who would listen to that shit. That movie would have been a lot better if he'd been beaten up at the end.

Cocteau Twins: writing lyrics is easier when you just fucking make up words, huh? Oh and writing music is a LOT easier when all of your songs sound exactly fucking the same. This band had it made, they could just sit back and relax. Too bad nobody liked them, or their plan would have been perfect.