Oh, go ahead, pitch me a nice slow one. Okay, I'm sure I'm not alone in the fact that when I'm listening to the Shitty Classic Rock station and I hear the opening notes of the hideous masturbatory solo that inexplicably precedes their retardedly bombastic cover of that Kinks song, my hand shoots to the radio dial faster than Eddie Van Halen's masterful hands spastically stroke his tiny, ultra-overcompensated dick. If I do manage to make it past the guitar solo, of course I'm rewarded with the uncharismatic hollering of Diamond fucking Dave, the spandex-jumpsuited king of overblown rock ego. And that's just what I have to say about fucking ORIGINAL Van Halen. If you want me to talk about the later singers you'll have to pay for the outrageous fucking therapy bills that will be required after I unearth that concrete-lined file from my memory bank.

Well, I'd be derelict in my duties if I didn't point out that Underworld used to be the shittiest (and that's not my opinion, that's concrete empirical fact) 80's synth-pop band ever to exist. Yes, I have the records. I'm not talking about Freur, who were marginally good, I'm talking about Underworld Mark I. Same guys. You'll find their records at any used record store that never throws anything away, because these things won't be flying off the shelves without the assistance of high explosives. I'll give these dudes one thing: their comeback was a massive fucking miracle, I don't know how they pulled it off. They certainly wouldn't have been able to if anyone had actually remembered how crappy their old records were, that's for sure. Of course, since that big two-album comeback they've been slowly but surely waning in influence in popularity and sounding more and more like their shitty 80s selves with each new project. 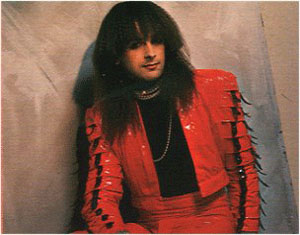 Stephen Malkmus and the Jicks: Old Steve was scraping the bottom of the barrel with Terror Twilight, and now he's back, and he's apparently found a new layer of scum down there. When you listen to his records you can practically hear the other members of Pavement rejecting the songs one by one. In fact, if you buy the Pavement DVD, you can see him with an acoustic guitar demoing Discretion Grove to his bandmates, who look about as excited about the song as a dog is about a stick of celery. Oh well, without the shackles of a band, now he can fulfill of his self-parodying comedy dreams overblown classic rock fantasies. Oh look, it's a ballad about Greek gods! Oh hey, there's a wacky little number about Yul Brenner! Oh Stephen, it's as if you never went away at all. By the way, here's a leather-bound copy of your legacy, if you'd like to take a steaming shit all over it.

Sebadoh had Lou Barlow. He seems alright when you hear his songs, but actually the man is borderline retarded. How can I tell? Because he lets Jason Lowenstein and whoever the hell else is in his little festival of fools write all the songs they want and drag down the quality of the albums. He's probably still mad at J. Mascis for not letting him write any songs in Dinosaur Jr, so now he's overcompensating by letting the worst songwriters in the history of song rape all of his records. Maybe if you put all of the material he wrote together and released it as a single Sebadoh album it would be halfway decent, but you'd get a weird feeling that the Lou Barlow songs weren't as good as you recalled. Why? Because he didn't have those other fucking clowns around to make his songs sound like musical genius by comparison.

The Strokes are what you'd get if you took Television and stripped them of all their technical ability, put a ton of overdrive on Tom Verlaine's voice so it disguised the fact that he couldn't sing, time-warped them to about 30 years after they were even remotely innovative, and maybe gave them about 10 million dollars to spend on whores and publicity.

Toad The Wet Sprocket! Oh boy! They were basically the kings of the mid-90s "rock for people who are too frail and timid for grunge" movement. The Goo Goo Dolls, the Gin Blossoms, Better Than Ezra, Dishwalla, all those boring bastards. I have this theory that you could replace any member of any one of those bands with any member of any other one and nobody, not even their die-hard fans would be able to tell. Maybe they could if it was the singer, but that's still doubtful. They'd sort of squint into the stage lights and say "Oh, well, he has that sort of mid-length brown hair and that plaintive voice... I guess it must be him." Too bad Empire Records was just a place in a movie, or lovesick flannel-clad white kids might still be buying those records.

Leonard Cohen, you need to start just releasing books of poetry exclusively, because the music thing is just not for you. Your grim monotone makes every song you do sound the same. They're all pretty much just tuneless and depressing, so quit pestering music fans and go bug those losers who read poetry instead.

Hey Carlos Santana, I'll give you a million dollars if you do a an artless, phoned-in collaboration with my dog's wrinkled anus. Oh, hold on, my phone's ringing. Mr. Santana? Oh shit! Sorry dude, I wasn't serious! Just back off, okay? I don't have any fucking money for you.

Who the fuck does this woman think she's fooling with the name "Craig" and her little penciled-on goatee thing?

I think the chicken-hawks who manage and promote the little pink-bottomed sexpot have been doing him quite enough already.

Neither have any of us, because he's a fucking dead recluse. Nick Drake is what you'd get if you took Donovan and then blanded him down about 75% until he was boring enough to stick in a car commercial and catch the attention of some hip college boys who could buy his records and then pretend that they'd always known about him. Oh, and just for the record, I had all of his albums before that Pink Moon Volkswagen commercial came out, because I actually am hip and with it and beyond all criticism.

Damien requested:
Eh, still didn't see Mindless Self Indulgence. C'mon, that's an easy one too. Another easy one for you would be Andrew WK. Also please do American Hi-Fi.

One of the reasons why I pity all the stupid Jhonen Vasquez-worshipping black-trench-coat fags in this world is because they've totally resigned themselves to the fact that nobody likes them. Another reason I pity them is because they listen to Mindless Self Indulgence, which is a band so terrible that it seems like they're not intended to be listened to at all. I guess they have a lot in common with the contemptible dorks who listen to them: nobody likes them, nobody ever will, and the average person stays far, far away from them because they suck and have absolutely nothing to offer anyone who isn't a total social reject. 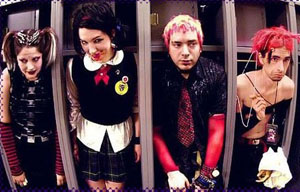 Andrew WK is what you'd get if you took the idea of rock and roll music and then dumbed it down as much as you possibly could without totally destroying it, and then you took that dumb and you put it in a pan and boiled away all the water so you were left with just a thin black film of pure stupidity. Then maybe you fed that to a Chihuahua and let him shit it out. And of course, the public's response to this stupid shit was to buy thousands of copies and proclaim it as great ironic genius. Then of course after hearing some interviews, people realized that he wasn't being ironic, he really was just a retard. After that, only the people who aren't ashamed of total and complete stupidity managed to hang on.

As for American Hi-Fi... Jesus. Imagine that you sort of wanted to listen to Blink 182, but you found them just a little too rowdy for your taste. American Hi-Fi is the kind of shit you'd have to fall back on. There is absolutely nothing you can do to rock music to make it any lamer than American Hi-Fi. Everything that possibly could be weak and lame about it is right there. The rock and roll dream is dead, and in its place is American Hi-Fi.

You know what’s funny about this? I have no idea who American Hi-Fi were. It’s only been two years and I’ve totally forgotten about them. I guess they didn’t manage to kill rock and roll after all, but judging by how much I used to hate them, I reckon they gave it their best shot.

Thanks for the two marvelous years of support! As usually, I can be reached for comment and abuse at davidthorpe@somethingawful.com. I’d also like to thank the beautiful Yannick Denzer for continually e-mail bombing me for the past couple of weeks. Apparently he’s never heard of “filters,” so he is unaware that his messages are automatically deleted before they get to my inbox. If you’d like to speak with Yannick, you can reach him at the following delicious address:heavyraptor@yahoo.com