Saturday, Nov 13, 2004 by Reid "Frolixo" Paskiewicz
Know of an awful site? Send it to us and become a hero!

Xtreme Strength Gallery, submitted by Hellsap. Today's awful link is dedicated to a horrible art/photoshop gallery of woman with extraordinary strength. I don't know about you, but the only thing that gives me a boner is when a muscle bound chick picks me up in her bulbous arms, and tosses me on top large buildings where I'm stuck until a rescue helicopter can save me. Ok so maybe this is a really stupid fetish, but that's not the worst part about this site. 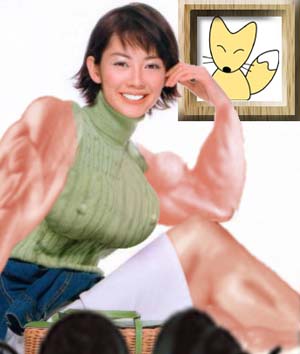 I don't know whats going on here but I don't like it one bit.

The "art" on this page is so mind numbingly bad that I tried stabbing my computer screen to kill the images but only caused angry sparks to harm me once again. I guess these kinds of pages are for men that are so utterly pathetic and feeble that the thought of a super strong woman dominating them reinforces their idea that they are a lowly worm, and thats why they were never taken to a ball game as a child. I think a law should be made that you have to pass a mental competency test before you can purchase an image manipulation program. This would solve 90% of the Internet's problems.