Ladies and Gentlemen, the next President of the USA: this dickhole.

It's election season 2012 and the Republican Party is mad as hell and they aren't going to take it anymore!

Of course, it's no surprise to anyone that their anger started roughly around the time weelected a black dudeer, I mean, started having our right to work for 30 cents a day in the coal mines eroded by Unions and our economy ruined by NPR and Planned ParenthoodER I MEAN DIDNT VOTE FOR AN OLD ASS NAM VET AND HIS CLINICALLY RETARDED RUNNING MATEyeah, y'know what, let's go with "elected a black dude". I think that basically covers it. 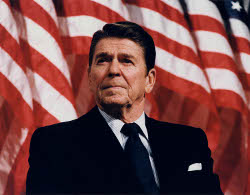 Kid Tested, Gipper Approved! (it was very personally satisfying to make this picture of Saint Ronald aligned left)Their response, however, has been nothing short of comedy uranium and consists almost exclusively of trying to prove to each other that they're the Tea Baggin'-est Teapublican that ever Ronal'd a Reagan. It's basically like an IRL version of that Monty Python sketch wherein the Pythons play a bunch of older gentlemen who sit around and try to one up each other on how rough their childhood was which ultimately culminates in Eric Idle saying he had to get up 3 hours before he went to bed, work 27 hour days and come home to be murdered by his father every night. If you insert a few more references to "ABORTION ON DEMAND", "UNION JACKBOOT THUGS" and "HOMOSEXUALS SHOVING THEIR STIFF, THROBBING AGENDAS DOWN OUR THROATS", you pretty much have the Tea Party in a nutshell; emphasis on "nut".

This being America and all, polls show that the whiter someone is and the stupider the shit they say is, the more the shallow end of the gene pool will happily lap up their talking points like a retarded Weimaraner eating its own shit. See also: Newt fucking Gingrich and Rick doublefucking Santorum both being considered viable, electable frontrunners at varying points despite possibly being the two worst human beings ever shat out of a vagina (objectively speaking, of course), simply because they spent months trying to out-scream each other aboutblack peoplewelfare recipients,women who don't want to carry their rapist's baby to termmoral decay as well as black people and women who don't want to carry their rapist's baby to term (without dog whistles this time). 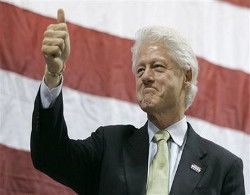 If we follow this trajectory to its logical conclusion, the premier GOP candidate would be a mustachioed, out-n'-proud racist-sexist-homophobe who looked like someone poured lumpy mashed potatoes into a cheap suit. To that end, I submit to the Midnight Society one Mr. Grady Warren. And if what I said holds true about people loving white people that say stupid, repugnant shit, say hello to the future God-Emperor of the Americas.

Grady's platform is nothing short of revolutionary, by which I mean "nothing short of something he heard on Limbaugh with the stupidometer dial cranked up to 11 from its previous position of 10.9". Let's take a look at his honest-to-God platform: 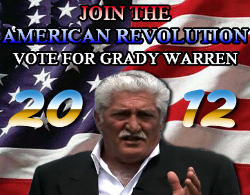 Yes, let's elect an old, white dude with terrible ideas. What a revolutionary idea!He ends his spiel by addressing his critics. All "ANYONE WITH TWO BRAINCELLS TO RUB TOGETHER" of them. Apparently, if we were silly enough to think that Grady Warren isn't intelligent enough, experienced enough or was otherwise completely and utterly unfit to run a lemonade stand let alone the US of fucking A, he reminds us that he's learned from the greats: a bunch of corny ass conservative talk radio hosts whose talking points he has shamelessly ripped off (only COMMIES and ISLAMISTS figure things out for themselves. REAL AMURKINS like Grady have to be spoon-fed their opinions like the infants they are). Also, he's "in the top 10%" at Rush Limbaugh's pretend online university (Cool New Joke: "Republicans hate education so much, they can't even score higher than a B at fake schools that exist solely to confirm their preexisting opinions!")

You'll be completely unsurprised to learn that he elsewhere rails against Obama, the current President of the United States, for being inexperienced.

I for one welcome our new Retarded Wilford Brimley Overlords. All hail his Eternal Majesty, Lord Diabetus I.

"This guy HAS to be a plant to make teabaggers look dumber than we know them to be."

"Subscribing to this channel. It FEEDS my ego to know that there are people this dumb."