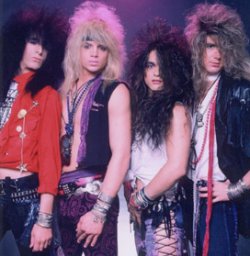 The 80's was a magical time for men and boys alike. It was a time of an entertainment upheaval; a cultural lashback against the stagnant mire of the late 70's disco. The populace was clamoring for something fresh and in your face. Music that would rock and roll but with an image that would knock your pants off and kill your grandma with the aftermentioned pants in flight. What emerged out of the wreckage of bell bottoms and John Tavolta was 80's hair metal, and it was a whirlwind of fashion that can only be compared with the rise of the Nazi party in the 30's, or maybe the Boxer Rebellion. Men started to sport tight black leather pants and teasing their hair to incredible sizes. With this look came a party attitude that said to the world "I'm here to rock and I'm as pretty as a princess!" Old people hated it, young people reveled in it, and pigs didn't pay much attention because they are busy eating slop all day like pigs tend to do.

I remember my first concert ever. It was the KISS tour when they took off their makeup for some reason. Opening up for them was Slaughter, Winger, and Whitesnake. Being a very small child in this environment was distressing to say the least, but at the same time, it filled me a longing to belong to this wild world of tight pants and pube mustaches. The concert itself was hazy, but the crowd at this event was the real show. Some girl near the front row was flashing her boobs to everyone, and then a large shirtless ogre who was previously using my head as a beer coaster put me on his shoulders so I could partake of the boob flashing as well. When it was time for the rock ballad, the lights dimmed and the entire stadium was lit up by cheap BIC lighters, like a Christmas tree full of rock and roll and body odor. A fantastic time of drunken debauchery was had by all, and the music was so loud that everybody left with permanent damage. For those of you who share nostalgia for this spunky patch of American culture, I'll be reminiscing over some of the most awesome and pretty bands of the 80's who changed the face of the earth with rock, spandex, and a whole lot of hairspray. 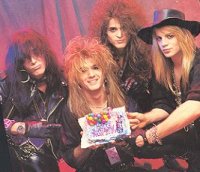 Tuff
Few know the legend of Tuff. Known in the hair metal scene as being one of the prettiest bands ever, they rocked their way down the Sunset Strip making a name for themselves amongst guys that drove Camaros and loose girls. Early on there were problems, as vocalist Jim Gillette struggled with a nitrous huffing addiction, and Todd Chase (bass), was caught playing with his hand puppet collection, hurting their reputations for being “tuff” guys. Despite these setbacks, word started to spread about the band after years of heavy touring around America. Soon they landed a major record deal and started to get some air time on MTV with their single "I Hate Kissing You Goodbye". It was a huge hit, and it looked like nothing could stand in the way of their rise to fame. That was until a band named Nirvana released their song “Smells Like Teen Spirit” around the same time, killing off Tuff with a quick and merciless blow to the skull. The same fate awaited similar bands, and the conspiracy that the prominent figures of glam rock had Kurt Corbain killed still remains unsolved to this day.

Winger
Oh Kip Winger, you incorrigible scallywag! Known for their #1 song about pedophilia "She's only 17", Winger was catapulted into the mainstream with their radio friendly songs and Kip's uncanny resemblance to Renegade’s Lorenzo Lamas. Fueled by legions of female fans yearning over Kip’s curls, and teenage boys buying tickets to the shows to check out the female fans, Winger had no problem selling tickets. What they did have a problem with was Kip’s addiction to the soft, supple flesh of young teenage girls. The band tried to hide this potentially career killing secret, but after “She’s Only 17" topped the charts, it was impossible to deny. One day while Kip was fumbling at a young teenager’s bra strap in his dressing room, the girl's father (a local sheriff) burst in and shot Kip in the voicebox, nearly killing him. Although Kip survived the shooting, the band was finished and faded into obscurity. In 1993 they got together one more time to make a compilation album called “The Very Best of Winger”. Unfortunately, there were no songs on the album. If you would like more info about Winger, check out the number one Winger fan site, but don't get your hopes up because by the time you see this, the bandwidth will probably be maxed out because it's hosted by tripod. Good job taking Winger off the Internet guys. 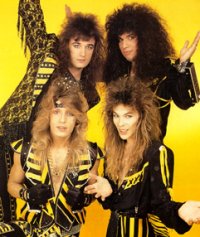 Give us all your honey or we'll keep playing!

Stryper
What do you get when you mix Christian fundamentalists with rock and roll, and a taste for honey? A bunch of pretty guys dressed like bees, and preaching the word of God through the power of hazard signs. Stryper stands for Salvation Through Redemption Yielding Peace, Encouragement and Righteousness. They never got laid after their shows for some reason. Despite being totally lame for believing in God, Stryper was mildly popular worldwide and somehow managed to sell a half million copies of their first album, although there are speculations that most of those purchases were from the band’s mothers. Stryper continues to play to this day, and just last year released “The Best of Stryper”. Just like the Winger album, the album is devoid of any songs. Go ahead and check out the band’s new web site and drop them an e-mail or two. They are currently rocking Puerto Rico but are very lonely because the natives think they are giant musical bees that have invaded their homeland for their sugary goods.

W.A.S.P.
One of the heavier hair bands to come out of L.A in the early 80's, they quickly gained notoriety by throwing raw meat into the crowds during shows and pretending to torture half-naked models on stage. While everyone agreed that the half-naked models were cool, most of the fans just bought tickets so they could nab some meat for free meals. You have to understand that most of the fans of these kinds of bands were usually unemployed or work at the carnival manning the Tilt-a-Whirl, so the promise of free meat brought folks all over to see their shows. Thanks to their clever meat and sex promotion, W.A.S.P. rose in popularity, but they also attracted unwanted attention from Tipper Gore who was opposed to the band and all they stood for. A large senate hearing was called on the subject, where the front man for the band, Blackie Lawless, stunned the panel by shouting “You can’t handle the truth!”, and then busted out a power chord on his guitar that he brought with him. Even with all the attention, W.A.S.P. was doomed to failure, and their demise was captured in the documentary “The Decline of Western Civilization 2: The Metal Years” in a scene where band member Chris Holmes is drinking himself into a stupor in full stage gear while lying on a float in his mom’s swimming pool. I wish to God I was making that part up.