They say that if you sat an infinite amount of monkeys in front of an infinite amount of typewriters, one would eventually produce the works of Shakespeare. I personally forked out an exorbitant amount of cash for the needed monkeys and typewriters to test this statement, and it's bullshit. The best they've been able to come up with so far is "bongo am qwerty Shaq-Fu", which last I checked was not written by Shakespeare. I'm pretty sure it was by Keates. Special thanks this week go to: Dennis "Corin Tucker's Stalker" Farrell, Brett "Nimmo" Hurban, and Jason "Vengeance Otter" Johnson.

A cursory glance at a man's haircut can tell you things about his soul; things it would take his gynecologist months to learn through multiple visits and countless sets of tongs and swabs. But why give that sort of psychological advantage to your enemies, family, and paperboy? Head to your local hairstylist and ask for the Og Cut, the standardized haircut that says, "I'm not original or unique at all and you really shouldn't pay attention to me" in much the same way that a mohawk does.

The haircut begins with shaving your head, and ends with the same hair being glued back on haphazardly. Some people claim the resulting Og Cut is so hideous that it has actually brought more attention to them, but we say, "Who just said that? Because no one directly in front of me stands out!"

Stealing a manatee is not what I would call an easy task, but it is not as difficult as you may think. I’ll spare you most of the details, but I will tell you that the extraction via 2000 slip & slides was by far the most time consuming phase of the plan.

My plan was to exploit this phenomenon with my endangered species rodeo. The opening attractions would be the manatee and a few condors that I had started to trap in order to build my business. The plan was to advertise that each person riding the manatee or condor would be the last person to ever touch it. The death of the manatee or condor would be simulated immediately after the rider dismounted, but in reality the animal would be put back into rotation, and it would be marketed as a pure and unridden animal. Of course, the scars on the manatee's back had to be surgically removed since they made the creature easily distinguishable.

The park opened and the manatee rides were most profitable. We could easily maintain a rider count of 20 people per hour. The condors were another matter. They could not lift the weight of most riders, and were unable to fly. This resulted in a pathetic series of hops by the large birds. We have a saying where I grew up, I’m sure you have it where you come from: “A hopping condor is a bad condor.” We fixed this by building a large slingshot, and launching the birds. This resulted in more satisfied riders, but had the effect of actually killing the birds. By the end of the first day, I was down to only having 2 birds left in stock in my condor barn. I needed some help. It was time to swallow my pride and make a call into the State Og main office.

State Og is concerned about the health of you and your family. Really. That’s why it hurts us to see all the alleged “pest control” companies out there trying to cheat you out of your hard earned cash with their vast conspiracy of lies. Take cockroaches, for example. A large chunk of the pest control industry makes its money from selling products and information that they claim will kill or ward off roaches. Take a look at a just a couple samples of their propaganda.

Myth One: To make your home a less hospitable place for cockroaches, don’t leave food out where they can get to it.

Fact: While the idea of making sure there is no food easily accessed by roaches might seem on face value to be a good idea, the truth is that doing so is just a waste of time. Trying to starve roaches out never works because while cockroaches love tasty scraps of human food, they can live indefinitely by eating raw pieces of the space-time continuum.

Myth Two: Roaches can be controlled with chemicals.

Fact: Despite what other companies might say, mere poisons can’t kill cockroaches – They are resistant to all toxins (including the comedy of Bob Hope). At most, you might hurt their feelings by attempting to kill them and their colony, but that’s OK. They’ll feel better after they’ve regurgitated all of the poisoned bait you left out for them into you and your family’s mouths as you sleep.

Don’t let all of this information get you down, for there are plenty of State Og products and services to succeed where other companies have failed! 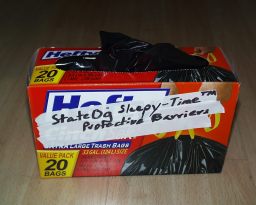 State Og Sleepy-Time Protective Barriers: Don’t allow roaches to treat your mouth like a fraternity party’s toilet! Use our new State Og Sleepy-Time Protective Barriers to surround yourself with a shielding veneer of quality air tight plastic. Before going to bed simply pull one bag over your legs up to your waist and another over your head down to your waist and seal the two openings together from the inside with duct tape for a roach-impenetrable barrier. As an added benefit the now-limited amount of oxygen will help you fall asleep faster!

Peace and Armistice Treaty Negotiation Services: You don’t have to see roaches as an enemy and we are willing to help you come to a diplomatic solution to your problem, such as sectioning up your house and declaring one half for cockroaches and the other half for all other creatures. Roaches are extremely dependable and can be trusted to honor their side of the bargain not to trespass your side of the house, though they may chase spiders over to your side.

If you have a problem with cockroaches, or any other pest, please consult with State Og. We stand by our record of never having received a single complaint from a person who has actually used one of our Sleepy-Time Protective Barriers, nor have we ever had a colony of roaches break one of the treaties we’ve facilitated. Just make sure that if you enter into a peace treaty with German cockroaches, don’t let them try to sign a non-aggression pact with Russian cockroaches. If that happens, all warranties are null and void, and our best recommendation is to just burn your fucking house down.