Sunday, Jul 18, 2004 by Zachary "Spokker Jones" Gutierrez
Know of an awful site? Send it to us and become a hero!

Mouse Planet, submitted by me. Mouse Planet was started a few years ago by an old chap named Al Lutz. Back then the site would report the latest news from Disneyland, both good and bad. For those that don't know, Disneyland is this terrible place that sucks your wallet dry and leaves you with screaming kids and a pissed off wife at the end of the day, whether or not you actually have kids or a wife. Going to Disneyland is like paying 53 bucks to go to glorified mall. Don't even think about going on rides. They are often closed down in disrepair or removed completely, only to be replaced with oxygen molecules and signs that say, "SORRY FOLKS BUT WE REMOVED YET ANOTHER CLASSIC ATTRACTION YOU WANTED TO RIDE AND REPLACED IT WITH NOTHING. FUCK ALL YA'LL!"

MousePlanet reported all this and changed the way many people thought about Disneyland, especially me. No longer did I think Disney could do no wrong. No longer did I waste my hard earned money from mowing lawns (I'm Mexican) at that godforsaken place. The whole park is a scam that stays afloat on nostalgia alone. In ten years people are going to realize the place is trash and just stop going. Some people already are. And MousePlanet was helping them.

Then one day they drove Al Lutz off the site that he started and turned into a shill publication that posted nothing but boring trip reports and travel advice on how to actually get your fat ass to Disneyland and their other crappy parks. Yes, you too can read about other people going to Disneyland!

This trip was first conceived in July 2002. Stephen and I were driving home from his grandparents in Pittsburgh, PA. During the 5-hour trip, we started talking about Disney and when our next trip would be. We came back from Walt Disney World in February, so it was time to start planning again. While talking about a possible upcoming trip for us, I mentioned how much fun it would be to take my parents and sister someday. My family had been to the Magic Kingdom several times on day trips, they vacation in Florida quite a bit, so they would frequently drive over to the Magic Kingdom for the day. Of course this was during the dead of summer when it's a thousand degrees and there are wall-to-wall people. Needless to say, my Dad didn't have a very high opinion of Walt Disney World.

I'm sure this is terribly exciting and all but I really need to get going. I have better things to do, like sitting here and picking at my asshole. And MousePlanet's forum, "cleverly" named MousePad, is as equally horrible. We could do an entire Weekend Web on the thing.

But one of my favorite parts of MousePlanet was MouseAdventure, which was this stupid trivia contest/scavenger hunt that took place in Disneyland. Every year a bunch of people desperately in need a good stomach stapling would run all over Disneyland looking for clues to their dumb trivia questions. Well, they would run for roughly 6 feet, then catch their breath for 15 minutes, then walk the rest of the way. The winners recieved a bunch of crap that any normal person would just throw away. I loved it because once it was over my friends and I would be able to make fun of the pictures of all the ugly people who went. It was like an extra dose of Cliff Yablonski Hates You and proved the age old truth, Disneyland fans are fat and ugly. As a matter of fact I submitted every picture on there to that old bean Cliffy Y, like this one here. 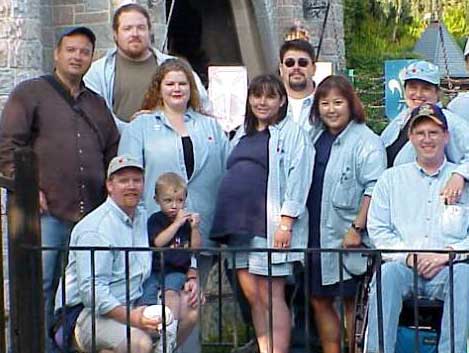 Sorry about the huge image size guys. This picture weighs roughly 14 tons (minus the wheelchair). 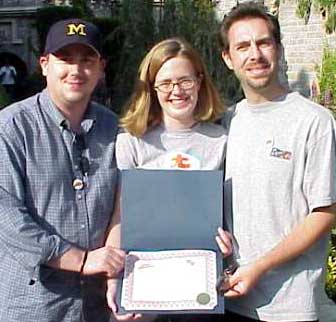 Everyone is welcome at Mouse Adventure, even down syndrome kids! 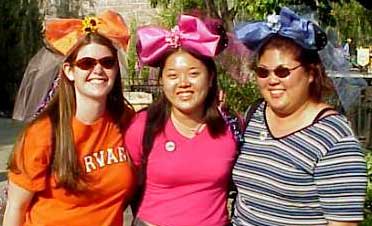 Every year I go to Mouse Adventure for the hot pieces of ass that come for hot hot Disneyland trivia. Judging from this image they havn't shown up yet. They usually get scared off by the yetis here.

Al Lutz now has a new site where he bitches about Disneyland and many other theme parks. Check it out and tell him Spokker sent you. He'll proceed to come over to your house and tell your parents you are messing around on the internet and they'll spank you. And we all know how much you love to be spanked.