Rise of the Planet of the Apes; The Change-Up

It's that point in the Summer where people start saying every previous Summer was a million times better than this one for blockbuster movies. However, every so often we get a Summer blockbuster like Rise of the Planet of the Apes, and that shuts them up... until they remember that for every Rise there are a dozen The Change-Ups.

Rise of the Planet of the Apes

EXPECTATIONS: It's been ten years since I paid money to see a movie with "Planet of the Apes" in the title. Last time, Tim Burton and Marky Mark tried their damnedest to convince me that their movie was darker and more sinister than the original, but instead it wound up falling flat on its stupid monkey face and looking silly as hell in the process. I guess ten years is the moratorium for having to live with a half-baked abortion of a remake. This time we get to see how the Planet of the Apes first ... um ... rose? That's what the title is implying, right? Astronomically, that doesn't make too much sense, but at this point in the summer, I'm willing to just roll with it.

REALITY: Fifty years from now, when film professors write volume 45 of A History of Moving Pictures: Super-Kindle Maxi-Edition, there will be a section about the concept of prequels. After briefly mentioning George Lucas and Star Wars and all that nonsense, the case study for how to do one of these properly will be Rise of the Planet of the Apes. What makes the film such a good prequel is that it's only tangentially related to the things we know about the original. It stands on its own two feet the way most apes/prequels usually don't. This is a film little concerned with Charlton Heston and the Statue of Liberty and all the other silly pop-culture artifacts that most people recognize about the Apes franchise, and is instead a well-acted and surprisingly thoughtful character study of the chimpanzee that would go on to destroy the human race. It's sentences like that that really make me love summer blockbuster season. 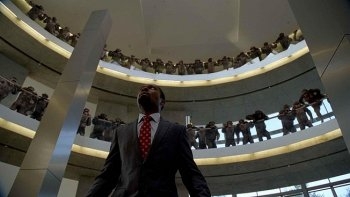 My job is to not let any monkeys get into the building. I think I may be fired.Planet of the Apes Begins tells the story of Caesar, a smarter-than-average chimpanzee whose owner Will (James Franco) is developing a cure for Alzheimer's. The cure not only repairs brain tissue but also boosts the brainpower of its host. After an incident involving the doctor's Alzheimer's-afflicted father (John Lithgow), Caesar is shipped off to an ape prison guarded by Draco Malfoy. While Caesar plans his escape, Will does everything in his power to rescue Caesar, which basically amounts to running around yelling at businessmen. It's not long before Caesar gets his hands on the Alzheimer's drug and begins infecting his fellow apes. After that, all hell breaks loose and the Planet of the Apes begins to rise.

There are many ways in which this film could have been a total, unmitigated disaster. It could have easily become an ape-centric slasher flick. When I sat down, I was actually concerned that this would slowly turn into The Happening with monkeys. Fortunately, the film saves its violent ape rampage for the third act. Before we can get there, though, we have to understand why the apes would want their planet to rise in the first place. The original series posited that it was because the apes were tired of being used as domesticated pets, eventually resulting in nuclear war between man and apes. Here, Caesar's motivations are apparently compounded by mommy and daddy issues. 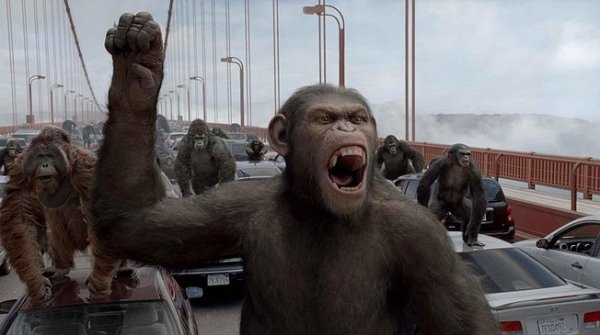 Planet Aperise succeeds where so many of its fellow summer movies have failed: Its main character is imminently compelling. What exactly are we supposed to like about characters such as Tow Mater, The Bad Teacher, or Shia LaBeouf? Each of those films is ultimately brought down because we have no reason to care about the characters. They may be acted well (emphasis on "may"), but they aren't written well. You'd think it would be a no-brainer for a big, expensive Hollywood movie to concentrate on the one character with the most screen-time, but somehow that hasn't happened very much this year: "Just throw Johnny Depp in his pirate makeup and get him to jump around. The kids'll love it!" Without a compelling lead, there's no movie.

Once again hidden beneath a layer of ones and zeros, Andy Serkis provides the motion-capture performance for Caesar, and he's easily the best thing about the film. While the CGI itself is sometimes shaky at best, it nevertheless allows Serkis to play Caesar with a surprising amount of depth. He (thankfully) only gets two lines of dialogue in the entire film, but Caesar makes up for it through complex facial expressions, darting eyes and a fully expressive range of motion. Andy Serkis does for this film what he did for The Lord of the Rings and King Kong: He takes a character that any other actor would have played with wild gesticulation and screeching and applies his special brand of subtle mannerism. An hour into the film, I realized that I was not only loving Caesar as a character, but also rooting for him as he led the apes to revolution. Whether the filmmakers intended for me to cheer for my own destruction or not, the care taken with the Caesar character had me rooting for him regardless. He could've gone to Capitol Hill and asked Congress to pass a law allowing apes to eat human babies, and I probably would have been okay with it. 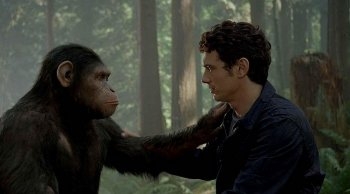 I'm so stoned right now. I could swear you look just like a monkey.As for the human cast of Origin of the Rise of the Planet of the Apes, it's pretty hit or miss. John Lithgow is great as Caesar's 'grandfather'; It's kind of a depressing role, but it deftly lays the groundwork for everything Will and Caesar are working toward. As the human lead, James Franco does alright with his role, but he's nothing special. It's still weird to see Franco in any film where he isn't playing some kind of aloof douchebag. Tyler Labine, playing Will's assistant, gets the "Jar Jar Binks circa Episode II" role. (Not gonna lie, I actually enjoyed this character, or at least the thought of Labine having to play it as penance for starring in half a dozen horrible sitcoms.) Suffice it to say, the characters who deserve a comeuppance for one reason or another eventually get one. (PS: Stay for the credits.)

If I have any complaint about the film, it's that it's far too short. Certain parts of the film felt rushed, almost like they didn't trust the audience to buy into scenes of apes doing people things. Rise of the Apes Forever is a pretty cut-and-dry three-act film, but I would really have liked to have seen more of an ending. I mean, we already know that the Planet of the Apes eventually rises. I'm not necessarily asking to be shown how it rises; I'd just like to see more of Caesar working things out. "Okay, gents, now that we've successfully rebelled, the next order of business is rising. Who knows anything about that?" That's something the sequel can tackle, I guess, but we've already got one good prequel here. How could they possibly deliver another?

MINORITY REPORTS: If you thought that one was good, wait til you see For a Few Fistfuls of Fuses More, the prequel to the Saddleblast saga. They made eight films before going back to square one, but good lord, it was worth it. - Donovan Laird


I love that Andy Serkis has now become typecast as a CGI ape. I wonder if he ever imagined such a thing could happen? - Ian "ProfessorClumsy" Maddison