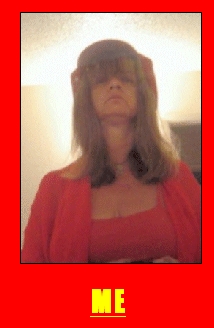 For readers stout enough to withstand the site's initial flash onslaught, Communism Eisenstark offers a cornucopia of dumbfounding conspiratorial assertions. Apparently, communist countries caused Hurricane Katrina; the United States is currently at war in Europe, with Iraq serving as a media-abetted decoy; "the atomic bomb is a ruse"; and, of course, the end is near. On a personal level, a multi-national network of oppressors has worked to steal Eisenstark's car, force her into prostitution, incarcerate her in psychiatric wards, hide her house keys, destroy her laptop, and perpetrate countless other offenses. Despite these hardships, she managed to convince Russia and China to boycott trade with America.

Unable to trust impotent local authorities, Eisenstark takes extreme measures such as contacting foreign embassies, writing to the United Nations and faxing an 228 trillion dollar invoice to President Bush for "intellectual patent theft." She does all this using the most bewildering language imaginable, so that even if these powerful entities weren't disinclined to help her because of (her communist, atheist beliefs/their own culpability in the villainous scheme/the radioactive raving nutfuck nature of her correspondence), they'd have no idea how to address her complaints.

Comrade Eisenstark has accomplished much despite the obstacles placed in her path by capitalist overlords. It's unclear whether pointing out the site's existence will rally supporters or embolden the powermongers to shut it down, but for a story this inspiring -- one they don't want you to hear -- I'm willing to take that risk. 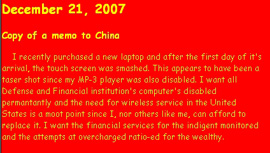