Friday was Nicolas Cage's birthday, and what better gift could he hope to receive than to have his long-delayed medieval farce finally creep into cinemas? We also checked out a realistic depiction of walking (The Way Back) and an equally realistic depiction of Gwyneth Paltrow desperately trying to win an Oscar (Country Strong).

Season of the Witch

EXPECTATIONS: At any other time of the year, a Castlevania ripoff starring Hellboy and the Ghost Rider would have me camping out in front of the theater days in advance. I mean, come on, in what universe does that log line not sound completely awesome? This one, apparently. Season of the Witch marks the first major release of 2011, which means it's the opening shot for the Season of Bastard Movies That Studios Would Rather Forget. It's pre-destined to A) suck, B) make about twelve dollars, and C) suck.

REALITY: Now, I was prepared to rake this film over the coals just on principle, but it seems the community of "real" film critics already beat me to the punch. They're flogging this one with socks full of dead batteries. Thing is, at worst their criticisms amount to zingers like "It's a really silly movie" or "Nicolas Cage's wig looks stupid" or "The CG effects are bad." Wow, guys, that sure is some hard-hitting review work going on there.

Season of the Witch is definitely a bad movie, but its failings go just a tad deeper than Cage's hairpiece. It's a movie that just plain doesn't know what it wants to be, with two leads who seem more interested in killing stuff than in exploring the film's litany of religious undertones and multiple narrative tangents.

The story, such as it is, follows knights Behman (Cage) and Felson (Ron Perlman), who desert the Crusades to live as wanderers. They come across a plague-ridden town with a witch (Claire Foy) locked up in its dungeon. The knights agree to escort the witch to a monastery to stand trial for witchcraft. They're joined by a priest (Stephen Moore), a peddler and an altar boy, who are all tempted by the witch in one way or another. 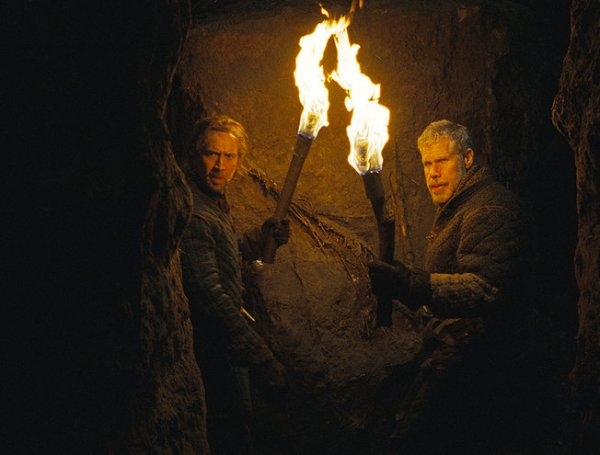 Is it gay when the flames touch?

As horror/action movie premises go, that's actually not bad. But Season of the Witch tries to do three or four things at once, and ends up doing none of them well. On the one hand, we have a story about two knights who've become disillusioned by the Crusades. Behman and Felson desert their post and attempt to return home, only to find a town decimated by a plague, presumably the black one. It's kind of like The Seventh Seal minus any symbolic imagery. On the other hand, there's the girl accused of witchcraft. Is she a witch? Isn't she? Is the clergy using her as a scapegoat for the plague? For a moment, it seems like the movie really wants to become a road-trip version of "The Crucible," but it quickly gives up on that train of thought and starts killing people instead. 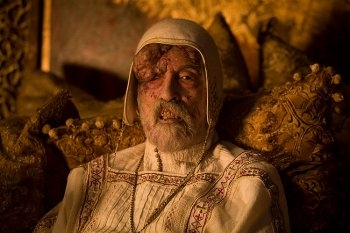 Once you get past the horrible disfigurement, he's actually a lovely bloke.Which leads us to the third act, where the whole movie collapses under the weight of computer-generated everything. Once our group of heroes and less interesting people reach their destination, the movie takes a turn toward the CGI-infested adventure story the studio probably wanted them to make instead. Here we learn that there are demons afoot, and they're after an "ancient" book of incantations called the Key of Solomon. I put the word ancient in quotation marks, because I'm pretty sure the Key of Solomon was brand spanking new around the time the movie takes place. Either way, it's treated as some prized relic that the movie was apparently about the entire time. I guess they forgot to mention it or something.

So okay, yeah, the plot basically sucks. It's like three episodes of some medieval adventure series strung together without anything connecting them except the characters and the notion that the girl might be a witch. Or a demon. Who the fuck knows? The movie certainly doesn't. I guess the only reason the movie isn't called Season of the Demon is because that's not a Donovan song.

People going to see Season of the Witch to watch Nicolas Cage and Ron Perlman ham it up are in for some sore goddamn disappointment. They get about ten minutes at the start of the movie to let their inner badasses out to play, and that's about it. As historical epics go, it's a pretty terrible reconstruction of the Crusades, but watching these two hack away at everything that moves and then call it a drinking game is the most fun that this movie ever gets. Once they've run out of one-liners and set out on their quest to take a witch somewhere, it's like the movie forgets it has Cage and Perlman at its disposal. A good zinger out of them every once in a while would have gone a long way in making this movie less of a boring slog through the wilderness.

I guess I can't be too hard on the critics who didn't bother explaining all the ways in which this movie sucks. It's not the kind of movie that really warrants scrutiny. Why else would the studio wait to release this thing in January? Season of the Witch is a colossally stupid movie with only a handful of scenes that make any sense or are worth watching. If your idea of fun is watching people traverse a rickety old rope bridge or watching demons hug people to death, then this might be a movie for you. You might also be a masochist, but hey, that's not my problem.

MINORITY REPORT: Witch-burning was the national pastime back in my day. Why, there was nothing I enjoyed more than to burn a young lady engaged in witchcraft. Then we would all dance around the ashes and summon the great demon Gahooloo, who would give us all flaming high-fives! It's not witchcraft when men do it, it's called sorcery and it's okay. - Horatio Smythe; Great-Grandfather of Montague "Legally Sane" Smythe