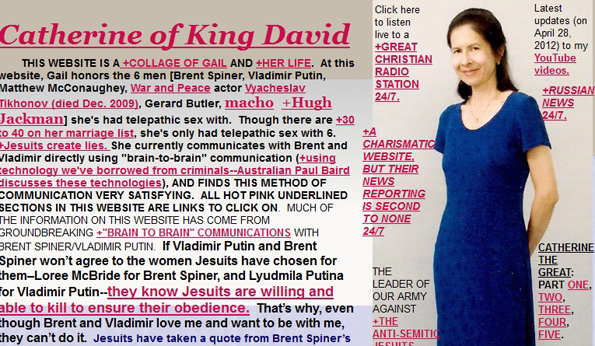 Hey look, it's another schizophrenic Christian! Text-filled webpages like this never really get old to me, because I can always find something surprising buried in all those multi-colored, multi-fonted, differently sized words. Like, yes, on the surface, woman believes religious sect is the Anti-Christ, blah blah. The hook here isn't the vast conspiracy theory so much as what the evil Jesuits are conspiring to do. Specifically, the Jesuits are making serious attempts to prevent this woman from marrying any one of the 30-40 men she's meant to marry, a list that includes Vladimir Putin and Data from Star Trek: TNG. Oh, and of those 30-40 men, she's had sex with five or so, including Hugh Jackman and Gerard Butler. Well, telepathic sex. Brain-to-brain! 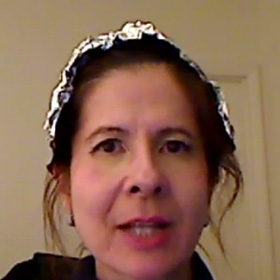 she is literally wearing a tinfoil hat lol

Honestly, though - there's so much fucking text, you can scroll anywhere and just start reading, about Brent Spiner's "velvet voice" or "the exposure of LIES from Jesuit-controlled planet earth" or whatever. I would advise ignoring the links - I clicked on one, and it tried to download a .doc file onto my computer, which is absolutely not happening even a little. Oh, and she makes a lot of YouTube videos. I started watching this one, and within a couple minutes she was accusing some lady of having sex with giraffes. Check out her channel if you'd like to feel really bad about making fun of a woman who clearly needs a lot of help and just isn't getting any. I know I did!