During my daily commute to the Something Awful fortress, I see a billboard much like this one:

I finally visited the Missing Jesus site, in hopes that it would feature a challenging Where's Waldo-style search game. But Jesus proved disappointingly easy to find, his face -- still a carved-up ransom-note collage for some reason -- decorating a poster that hangs in a creepy alleyway. After a few seconds, some old hippie pops up and starts going on about partying with his young friends and "doing extreme drugs" and -- I don't know if he was going anywhere with this, but there were six minutes left in the video and there was no Jesus to be found in the clip so I stopped watching.

Then I clicked on How to Find Jesus, which I figured would be like "Cheat Codes and Tips," because maybe there was more to this Missing Jesus game than it appeared, like, maybe if you clicked the right place in the alley, some clues would pop up to let you know you were on the right track, like in Carmen Sandiego. Instead, this guy started talking, and there were no controls to make him pause and no indicator to show when he'd be done, so I fled at once, never to return. So you won't tell me the whereabouts of Missing Jesus? I didn't want to play your game anyway! I hate those stupid Christians. Anti-Christ rules! 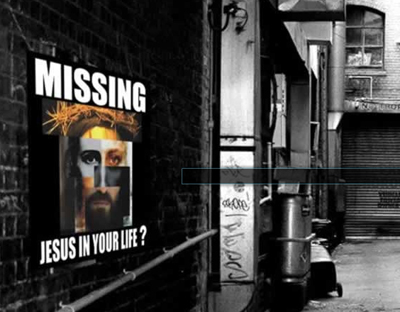