has anyone noticed strange things happening since cheerios + ancient grains was released?

Near the dawn of 2015, General Mills foretold the arrival of a mysterious new cereal. The SA Goons stared into the hole in their Cheerios + Ancient Grains and reported on the abyss that stared back!

has anyone else noticed strange things happening since cheerios + ancient grains was released? strange voices, walls seeming to twist and distort, that sort of thing. is general mills meddling with forces they couldnt possibly comprehend?

could these ancient grains be taken from sites holy to forgotten gods? who knows what horrors could be unleashed

"... these eldritch grains filled me with the most unspeakable dread. What secrets did they hold, within that Cyclopean container of stiff cardboard and well-designed packaging? Taking a deep breath, I steeled myself against the unknown, and opened the box..." - HP Lovecraft, The Grain from Out of Space, 1923 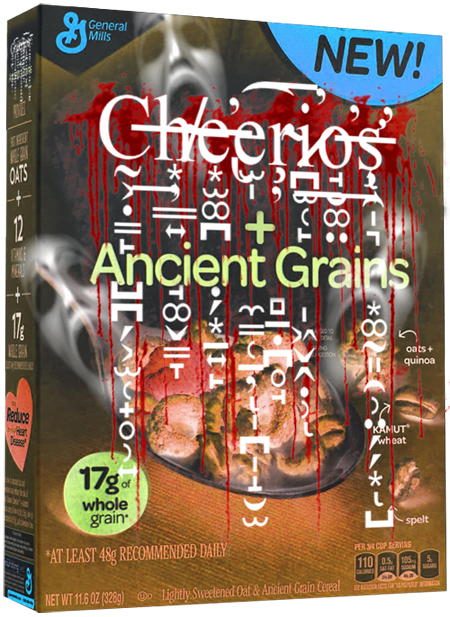 Went looking for Cheerios + Ancient Grains at my local supermarket, but when I tried to take some off the shelf, I discovered what I'd initially taken to be a row of boxes was just an impossibly detailed false-depth painting. I went to complain to the manager but after yelling at him for several minutes I discovered he was just a painting as well!

Not a fan of this new ad campaign or whatever it is.

Yeah my store pulled that one on me too, classic

Rest assured, if you check your pantry you will find your box, made just for you, waiting for you invitingly

The nutritional information on this box just says "Contains that which is necessary." How am I supposed to know if this has gluten in it?

The dark, unfathomable terror contained in the box of cereals consumed my soul and drove my mind into madness