At a Glance: When you look at the official Purge website and see a logo consisting of the word PURGE in a futuristic font with a “smeary glowing crap” filter applied and lightning pasted over it, you know you’re in for a kickin’ rad experience. Purge is a first-person shooter/RPG hybrid, which they proudly tout as a completely new and innovative type of game that no one has ever done before. Some fag named Rich “Lowtax” Kyanka sent me a link to a demo of this eye-scarring heap of digital pain, but he forgot to mention that the fun factor of the demo ranks somewhere around the level of playing Daikatana in hell while Satan threads a rope into your left ear and out your right ear and then starts pulling it back and forth to floss your brain.

Purge is not a typical FPS (First Person Shooter).

It is an online, hybrid FPS/RPG. Although it shares a similar interface, it can not be played like traditional FPS games e.g. Counter-Strike or Quake. Purge is a completely original, new kind of game. Please carefully read through the manual before playing. Unlike other FPS games, your success in Purge depends heavily on your understanding of the tactics and strategies in Purge, and not your run-and-gun skills. 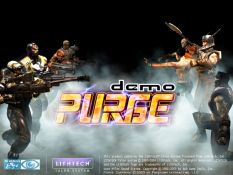 That’s the opening section of the official Purge manual. While it does helpfully inform you that your understanding of the tactics and strategies in Purge will not affect other FPS games, it fails to mention that you will probably not want to play Purge for very long because it is a vapid and boring mix of bland FPS action, simplistic RPG elements and some of the most bizarre bugs since Anarchy Online. The storyline, which was meticulously crafted over a timeline of 15 minutes by Freeform Interactive’s CEO’s mildly retarded nephew, tells a fantastic tale of one group of people who practice magic and another group of people who like technology. But wait, here’s the best part...the two groups don’t like each other very much, and they are each engaged in a very intensive and rigorous effort to make members of the other group die! I haven’t seen such a deep and involving story since last night when I played a game of TFC, so I’m very curious about how the Purge developers took such an epic saga and turned it into a steaming hunk of C code (or possibly Visual Basic code) that would probably attract flies if you left it outside on a picnic table. My theory is that the Purge developers are dumb.

The Purge demo has an indescribably massive list of predefined character classes (eight), so I have included a rundown of a few of these classes. For an added challenge you can see how many of the different classes you can try out before the horrible gameplay drives you insane and you bludgeon yourself into a coma with fireplace tongs, but I seriously doubt any of you have the fortitude to get through all eight. My personal record is four. 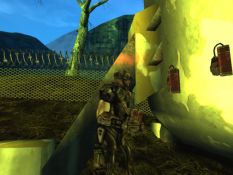 Well, I may not be a fan of their game, but I must give Freeform Interactive credit for their amazingly realistic goop textures.

Android: This is the first of four classes from “The Order”, the group who for some reason thinks that in the future people should use advanced technology. You’d think an android would be a scary enemy to face, since it’s an intelligent gun-wielding robot that looks vaguely like a skinny version of Sektor from Mortal Kombat 3, but somehow this enemy fails to strike fear into the hearts of his foes. Maybe it’s because its arms look like they’re made of staples and its profile shot looks like a wad of small metal tubes with two red LED lights glued to the front.

Weapons: Weapon number one is the most pathetic melee attack in existence. In one animation you slowly move each hand upwards one at a time, and in the other animation you do a weird limp-wristed double-handed push to the air two feet in front of you. Your second weapon is a truly terrifying futuristic killing machine known as a “gun.”

Cyborg: The Cyborg is the result of The Order’s bright idea to intimidate all the technology have-nots with a robot who looks like a person. But it has a hole in its forehead and a demonic grin on its face, which makes it look like it either recently escaped from an insane asylum or recently started listening to Dimmu Borgir. It could also be an attempt to scare humans by making a reference to a godawful Van Damme movie where the bad guy spent the entire movie walking around and beating up random people while calling them mean names.