At a Glance: FunCom claims they have already finished the game twice, once upon its release and a second time when it was deemed "playable" and the billing cycle began. After playing this "online" RPG (the word "online" being largely misleading in most circumstances), I'd imagine FunCom needs to finish this game about 90 more times before it will meet normal human beings' expectations of "playable." While Anarchy Online (in its current form) certainly does not bring anything revolutionary to the multiplayerly massively onlinely roleplayingly game category, FunCom certainly does make giant strides in the revolutionary art of "fucking over the people who buy their products."

System: PC. Or Super Nintendo, it doesn't really matter. You'll have the same luck playing it on either system. 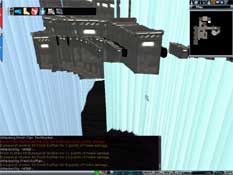 This is what a "finished" and "110% in order and correct" game looks like. All you other game developers might want to take notes.Anarchy Online. Merely mentioning the name of this massively multiplayerly onlinely roleplayingly game causes many different emotions and images to spring forth in my mind. For example, it makes me think of anarchy. Additionally, it also makes me think of something that's online. Despite these two exciting thoughts, my initial experiences with AO were not too favorable, resulting in over 20 game crashes an hour. Sure the "anarchy" part of the game's title was 100% true, but FunCom seemed to have trouble producing the "online" aspect of the game, one which is somewhat crucial to various massively multiplayerly onlinely games. Since the release of AO, the FunCom forums have been full of consumers complaining about purchasing a beta-quality product which was obviously shoved out the door so FunCom could secure more capital investment to work on their game, the capital arriving in the form of "selling an incomplete title that does not work properly. Or at all. For almost anybody. Ever."

Their PR department immediately went into overdrive mode, furiously deleting negative posts from their forums and promising to delay the consumer billing cycle until they were sure the game was "110% in order and correct." They strongly encouraged online gaming sites to hold off on their reviews until this point, and the gaming sites generally followed this suggestion since they depend on leeching off companies like FunCom for "exclusives" and other copy and paste blobs of digital ass-kissing. See, game sites don't want to risk offending game companies because their site's content is directly dependent on reproducing things that these companies say or release to them. This causes webmasters to roll over and pucker up at the slightest provocation, worried about making enemies with a company that could cut off all their exclusive information and content.

FunCom demanding that sites hold off reviews until they are "done" working on their already released game is the equivalent of Ford selling a car with only one wheel, taking in all the money that people spend on it, and then telling car magazines to delay publishing reviews of this undrivable car until they figure out how to install the other three wheels. In the meantime, people keep buying their product and the company continues to pull in more money, unaffected by the fact that consumers are purchasing a highly defective product. Of course this doesn't matter to game review sites because most of them have the journalistic integrity of an Iraqi military news agency covering a NATO picnic. Regardless, FunCom said they didn't want anybody to review the game until they had a chance to kill all the known bugs / issues. They also said that they would not start the billing cycle until the game was "110% in order and correct." (UPDATE: FunCom has decided to edit out the "110% guarantee" from their previous press release. Way to go, guys! Maybe you can now edit out the $56 credit card bill resulting from me buying your game!) Going by this logic, FunCom obviously wants people to review this game now and in its current state (as they obviously feel it's "completed," therefore 110% bug-free), and I'm more than happy to oblige. 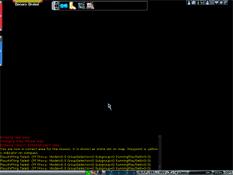 An exclusive screenshot of "Omni-1" and the highly futuristic error messages that appear when trying to enter / leave it.

Anarchy Online is the story of a Omni-Tek, a giant, megalomaniacal, universe-spanning company that tries to enslave millions of citizens by trapping them in building geometry and erecting invisible forcefields which keep them from ever passing through doors or leaving through the gates of their cities. Since this is "the future," Omni-Tek is able to warp space and time, making their entire city slow down to one frame a second, shrewdly trapping their citizens in and their enemies out. This humongous company is opposed by a large number of non-sentient, semi-permeable rebels who attack their citizens by embedding themselves in walls and punching their enemies from miles away. When Omni-Tek is feeling particularly evil (and their quest generating machines are functioning), they issue "missions" to their citizens, offering cash rewards and fabulous prizes in exchange for fixing one of their 19 million sabotaged radar dishes or highly futuristic computer devices, all of which are transparent globes sitting on a restroom or stocking room floor.

These extremely vital and important machines are always located in Omni-1's most run-down and decrepit crackhouses (of the FUTURE!) and are protected by nefarious rebels who lurk inside walls and are impossible to fight back against since they use what I assume is very advanced wall-morphing technology (of the FUTURE!). Most of these enemies can often be outsmarted by employing an ingenuous battle tactic known as "walking to another room," which makes it nearly impossible for them to track you down unless they are currently punching you from inside a wall twelve football fields away. Omni-Tek has been trying to reproduce this "semi-permeable wall-penetrating" warfare technology for their own gain but have not been able to so far, instead causing horrible failures such as "floors which make you fall through and get stuck inside" and "buildings that don't really seem to exist." Loyal residents of Omni-1 routinely fall prey to these failed experiments, dropping through what seems to be solid ground and finding themselves lodged inside buildings and world geometry, left with no solution but to page a GM or commit suicide. Since the names of all responsive Anarchy Online GMs can be comfortably listed on the back of a piece of fortune cookie paper, suicide is the only true option in this situation.