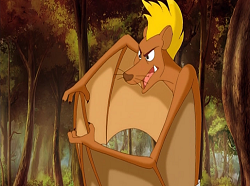 Even if this movie was a parade of mind-mutilating visual madness before the English dubbers got their hands on it, their (hopefully) improvised dialogue somehow rises to the worthy challenge of being even less coherent. What can you say about a movie that routinely spits out lines like "Which way is the top of the mountain" at you? Or has a bad guy whose response to being told to "TASTE MY BLADE" is "no thanks, I'm full"? The delivery of every single line like somebody sitting in a dentist's waiting room trying to fend off boredom by pointing to things on the cover of a magazine they don't particularly like or want to read is just...gravy:

Whatever shreds of a coherent plot we can decipher from all of the above make Perfect Hair Forever look like Wagner's Ring Cycle by comparison (not to say that Perfect Hair isn't amazing). Nearly every scene in this movie revolves around people saying they're leaving, starting to leave, and then coming back for no reason to stare at each other before eventually leaving again. When they're not busy cultivating sufficient doubt about whether they're actually leaving or not, everybody mostly seems obsessed with groping at swords. Pulling swords out of thin air, fusing their glowy sword powers together, twirling around with swords like skanking fat guys at a Hatebreed concert[2], or just generally searching for the One Sword to Rule Them All, everybody who's anybody has a sword. This movie could have been called "Game of Swords", but that would be mighty disappointing to anyone expecting to find worthwhile content like full frontal nudity or graphic beheadings. 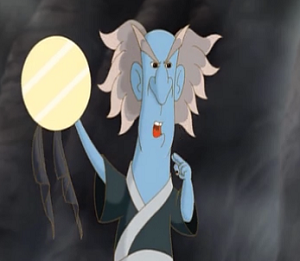 Ebert gave this movie 4 stars because they made Siskel such a blue asshole.Really, when it's not covered in technicolor insanity, the animation here makes us think of nothing so much as a cut-rate Sunday school video about biblical myths, especially our unstoppable Lord and Savior, Kung-Fu Jesus. This movie might be based on some inscrutable Chinese mythology, but the overall lesson is one we can all understand and relate to; everything we do is totally pointless in the grand scheme of things, because in the end some assholes from the sky (Wiz KaShifu and his ancient nemesis, the dark lord hunchbaby) are going to scald us all to death by spilling their coffee or show up and throw mountains and biblical firestorms around to obliterate the entire Earth because it looks really cool.

Maybe the real question here is the haunting brainteaser that The Lucky Dragon poses: "How do we know where the magic starts, and where the magic ends?" We can't help you with that one, but if you're determined to figure it out, you should start your vision quest here: