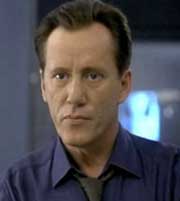 DAMN YOU, JAMES WOODS! GET OUT OF MY ASS-CRACK!

Well, the future is indeed now, and we officially have the interesting ability to clone people and animals and Delta Burke. This is both good and bad, but I'm not about to launch into an ethical debate about it because that would be about as much fun as having my ass-crack licked by a coked-up James Woods (read: not very much fun). Instead, I'll talk about all of the things that I would do if I could clone people and things with a snap. Now that's fun, and thankfully has nothing to do with James Woods or my ass-crack. Yet.

I should probably start talking about this by saying that I worked for a year and a half or so in a USDA molecular biology cloning DNA, RNA, barley, and other things that needed cloning. This was back in the day (a year ago) when for some crazy reason I thought that I wanted to be a doctor, until I realized that I dislike people and I'd rather lose at Warcraft 3 to snotty 14-year olds all day. I would have made a pretty crappy doctor, but I didn't realize this fact until I had already started groping older men's prostates on a regular basis. I lured them into the van with a promise of candy.

Anyway, the actual process of cloning, much to the surprise of people who watch "The Outer Limits," does not involve any lightning machines or lasers or tubs of goo that the cloned thing slowly emerges from, moaning. I wish it did. Instead, it involved about three hundred steps that consisted of putting things in tubes, taking them out of the tubes, and putting them in other tubes. It was boring beyond any and all description. More boring than Drew Curtis' Fark.com by and for Drew Curtis, if you can believe that. I wouldn't believe it myself if I hadn't spent so much time from my life at the lab pouring liquids into containers and then transferring the liquids to other containers containing different liquids. 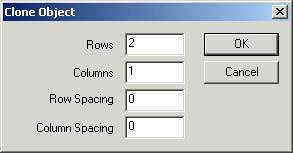 If only it were this easy. Or this exciting.

I always got pissed at people when they asked what I did at the lab and I told them that I cloned things and their eyebrows raised in shock. "Wow," they'd say. "That's rad! Like, you make people from other people? Can you clone me? Dude, I want a clone of my dog! Can you just clone my finger? Because then I could have this crazy cloned finger!" At that point I either patiently explained, using as few large words as possible, that cloning didn't exactly work that way or I punched them in the neck. Usually the latter. It was also fun explaining to them that you couldn't clone an adult of anything so a clone of you would be a baby. Roughly 30% of these people eventually understood this. The other 70% keeps asking me to clone their fingers.

A personal copy of Iggy Pop for each and every individual who lived in Burkina Faso. Hey man, just because your country's tiny and no one has heard of you and if your country went 'splody no one would notice doesn't mean you don't deserve to ROCK! 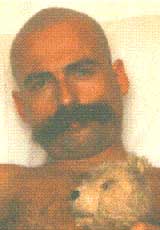 I will not be cloning this man.

Dinosaurs of all varieties and put them on an island with the intention of opening an amusement park and making money but only later realizing that I had no business playing God and that I had made a terrible mistake and now Jeff Goldblum's life is in danger. Damn.

Whomever was responsible for that trend in the 80's that caused so many people to wear leg-warmers because that way, he or she can be lined up against the wall and shot over and over again in a desperate attempt to regain a modicum of dignity.

Willie Aames, the dude who played "Buddy Lembeck" on "Charles in Charge." Because, I mean, it's Buddy! You can't have too many of that guy. Remember the one where he did that magic trick with the cards and Mr. Powell fell for it? That was hilarious!

Richard Nixon, who would arise from the ashes in a tower of flame and splendor to lead the Republican party to a glorious future in textile manufacturing and perhaps other things. I'm for Nixon!

Some fingers. Just to have some fingers. But they'd have little legs and walk around and stuff. Rad. 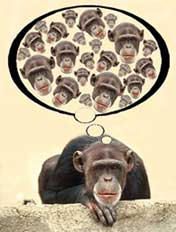 I found this picture when I did a Google image search for "cloning" and I thought it was just really funny that the monkey was thinking about lots of monkey heads.

The ability to clone things quickly and easily and without ethical repercussions would truly be an exciting situation, but unfortunately we are stuck here in a bleary world where cloning takes forever and involves lame-o morality or whatever. Stupid morality. Always there when you don't need or want it to be. Cloning also involves many un-fun procedures where you pop caps off of tubes and dump the tubes' contents into other tubes and mix them together. Repeat. There is also a lot of standing around waiting for the centrifuge to be done spinning and separating the chemicals that can kill you from the DNA that is also contained within chemicals that can kill you.

So you see, cloning things is not glamorous nor is it even very interesting. I am getting really sick of watching shows on TV where they show a cloning procedure and it somehow involves bright lights and smoke and scantily clad, muscular men. They also somehow manage to clone adult humans who have all of the memories of their clone, so when the clone rises out of the clone-pit or whatever, the first thing it does is gaze longingly into the eyes of its loved one who had it cloned, saying "Oh, Scott, I missed you! But now that I am a clone everything will be fine and there will be no more problems of any sort, ever!" Cue orchestral string rendition of "Everything I Do, I Do it for You."

I know that my partner in crime, Rich "Scabies" Kyanka gets sick of watching these shows, too, because every time one is on I jump up in outrage and say very interesting things like, "They didn't even PCR that or cut it with restriction enzymes before inserting it into the vector! There is no way that that clone will work!" Then I usually look at him triumphantly but he is too busy hanging his head in despair and shame. I'm sure that there are times when he wishes that he had made sure I had been sufficiently taught in the Learning Closet before he let me watch TV with science on it. I try not to react to shows like that because I tell myself that they are only entertainment and no one takes them seriously, anyway, but then I chat with people about my old job and to my horror and dismay I find that people really have no idea that there are no computers involved with the actual cloning procedure.

Cloning entire living things (e.g., not just organs) is one of those things that is an interesting idea but that practically doesn't make much sense. You can talk about it in existential terms for a long time but you just end up frustrated and in jail for battery. I suppose that the bottom line here is that there is no bottom line. I have no idea where I am going with this and I don't think that the world has any idea where they are going with cloning, so I think I'll just leave it at that and go eat a delicious ice cream bar. Please do not ask me to clone it.