Resident Evil: Afterlife is the worst film of the year, and Ian "ProfessorClumsy" Maddison is going to tell you why. Also, Joseph "Jay Dub" Wade was free to choose his own film this week, and he came up with the very interesting Winter's Bone, a goodwill recommendation for readers who'd actually like to watch one of the movies we mention.

You Didn't Really Think This One Through Did You, Paul?

Yeah, I know it probably seems like a cop out to sum up my feelings with such a flippant single-word response, but there really isn't any other way to express it. I expect absolutely nothing from Resident Evil: Afterlife. With trailers playing up the fact that "every shot was designed for 3-D," which is a bullshit variant on "things fly towards the camera constantly," and a director whose greatest achievement to date is to be regularly confused with a much more accomplished director with a similar name, you'll forgive me if I don't get too enthusiastic about this one.

REALITY: The Resident Evil video game franchise was never noted for its powerful storytelling. The best it could do was distract you from its nonsensical narrative with effective atmosphere and jump scares, combined with a mix of puzzle-solving and fight-or-flight gameplay flourishes. Naturally, in the transition from game to film, the storytelling is pushed right to the forefront, and you can't distract people from your nonsense when they're not having to deal with shit at the same time. Paul W.S. Anderson has tackled this issue by completely doing away with the story of the games - not a bad idea in itself - and replacing them with one that makes even less sense. How is that physically possible, you ask? Well, let me see if I can unscramble this shit and put together a semi-coherent synopsis for you. 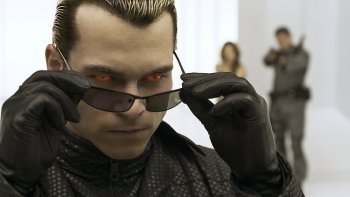 WESSSSSSSSSSSSKERRRRRRRRRRRRRRR!!!!Albert Wesker (Shawn Roberts) is the obviously insane, yet massively wealthy chairman of a huge umbrella corporation called Umbrella Corporation. This is a front for his improbably expensive scientific experiments involving something called a T-Virus, which causes an unstoppable zombie apocalypse, among other things. So far, so acceptable; assuming you don't stop to think about character motivations and that sort of thing. Wesker's corporation is seemingly brought down when Alice (Milla Jovovich) and her army of Alice clones (the exact amount of whom is impossible to determine) violently murder all of his security personnel by defying the laws of physics and geographical restrictions.

Some time later, when Alice has supposedly lost her super powers due to an injection Wesker gave her, she is able to re-unite with her old friend Claire Redfield (Ali Larter), who suffers from convenient plot amnesia brought on by a robotic spider stuck to her chest, and together they go to a prison to rescue a small group of people that conveniently includes Claire's brother Chris (Wentworth Miller), who she doesn't remember because of that whole plot amnesia thing. They escape the prison, thanks to an enormous cache of automatic weapons, and make it on board a ship they expect to hold their salvation only to find that - surprise, surprise - it's an Umbrella Corporation vessel and Albert Wesker is on board carrying out his crazy experiments. 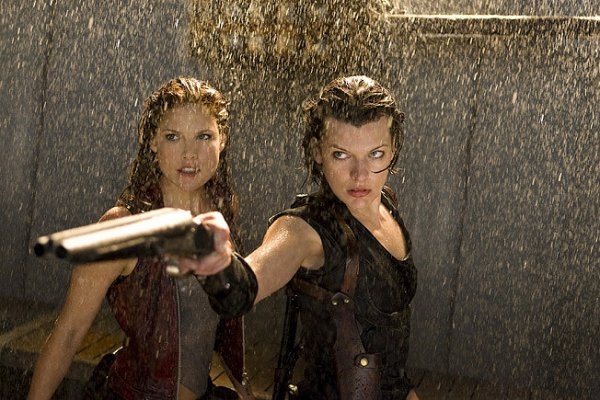 Our interchangable heroines strike a pose as water drops cascade around them. All in glorious slow-mo 3-D! For the entire film!

That's just boiling it down to the basic elements of the three-act structure while skirting over the copious amounts of plot convenience, physically impossible action scenes and characters who can magically teleport from room to room so long as they're not on camera. There are so many instances of the latter that giving only a single example would not do it justice, so here comes a list:

Considering this is supposed to be an action/horror film, a good sense of geography is essential. You can't just make stuff up on the spot for your characters to have already done off-screen, you need to give audiences something that makes sense. Remember Die Hard? That film had an excellent sense of geography. They spent a lot of time early on establishing where things were in relation to each other and how the main character moves around undetected. In Resident Evil: Afterlife, anybody who has been off-screen for any length of time is liable to suddenly appear behind you. It's pure laziness on every level, giving me the impression that Paul W.S. Anderson just doesn't care. He doesn't want people to think about his films on even the most basic of levels, which is to say, he doesn't care if people can even accept what they are seeing in front of them. All he cares about is if it looks cool, and that brings me to my next point.

Everything we see in this film looks like it came from the imagination of a young boy. Waifish super-models performing acrobatic martial-arts to brutally massacre faceless bad-guys and zombies, whilst constantly stopping to strike a pose in slow motion, does not constitute action in my book. The fact that all of this is presented in headache-inducing 3-D doesn't help either, especially when most scenes look like they were constructed from cardboard cutouts stood at varying distances from the camera. Every action scene falls into the same relying-on-convenience trap that the plot does, with trays of scalpels and falling shards of glass suddenly being put to improbable use whenever they were needed. 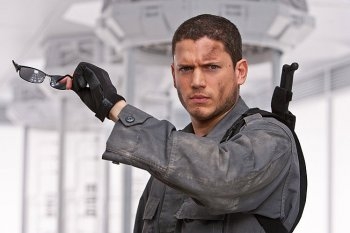 When the bad guy throws his sunglasses at you, you shouldn't bother catching them. Did you just want them for yourself? Did you want to look cool when Wesker beat you into submission?So there's no internal logic, the visuals beat you over the head, and the story is laughable. Please let there be some kind of an emotional hook at the very least ... Sorry, not this time. You'd think that the reunion of Claire and Chris Redfield would serve as some kind of emotional centre for the film, but it doesn't. In fact, apart from their initial scene in which Claire does not remember him, they barely interact at all. Even after Claire's amnesia is magically lifted, she offers no reaction to her brother's presence. They don't speak to each other, there is no indication given of how long it has been since they saw each other, their relationship is completely ignored.

All that does is make you aware of a huge failing with the fundamentals of the script; Alice and Claire are exactly the same character, differentiated only by one of them having amnesia. They may as well be the same character; just have one protagonist and then introduce Wentworth Miller as the brother, and instead of having amnesia, introduce some kind of tension between them. That way you can at least explore an emotional arc and actually have a somewhat engaging film. Who am I kidding? Anderson doesn't even understand how moving from one room to another works, he clearly isn't ready to learn about engaging story-telling techniques.

I want to finish by bringing up the only good thing about the entire film: it is only 97 minutes long. Thank God for that. Don't get excited just yet, because there's one more criticism coming your way and it is directly tied to what I just said. This film has no ending. There is absolutely no denouement to speak of. I know what you're thinking: "But ProfessorClumsy, you already spoiled the third act. Isn't that the ending?" Well, soon after that happens, a huge taskforce of Umbrella Security Dudes show up and a new villain is introduced and then they ... roll the credits. What is this, a television show? Do I have to tune in next week to find out what happens next? Then it hit me; that incoherent opening sequence. That was the ending of the previous film, wasn't it? This is how this franchise operates, holding out on the ending so that people watch the sequels. I'm wise to your evil plan, Paul W.S. Anderson. Wait... W.S? WeSker...? WESSSSSSSSSSSSSSSSSSSSSSSSSSSKERRRRRRRRRRRRRRRRRRRRRRRRRRRRRRRRRRRR!!!!!!!!

MINORITY REPORT: I once survived a zombie outbreak myself. The undead creatures attacked in droves, succumbing only to irreparable cranial onslaught or dismemberment. Unlike the zombies depicted in the cinema, these creatures ran away from me as fast as they could, rather than lumbering towards me. I wondered at times if their infamous penchant for devouring the flesh of the living was grounded in any sense of reality at all. -Montague "Legally Sane" Smythe