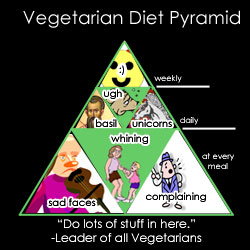 Everybody hates things that are different. You hate getting used to changing technology. You hate the idea of having to try that new salami and pop rocks pizza that you’ve never touched before. And you definitely hate it when people tell you things you don’t already know. This is why, as a vegetarian, I am incredibly vulnerable to flying looks and angry rocks. Plus I live in a country where “Philosophy” is also the name for a beauty product line. I’m serious.

To make this seem all seem more official, I looked up lots of words online. While randomly opening and closing my eyes on different spots on the screen, I came up with an official term to illustrate the condition of life as a vegetarian:

Harumphiwubsteak: The noise made by any grouping of non-vegetarians when they all suddenly realize that they have to accommodate a smaller group, usually a single individual, of vegetarians.

This is just one of the behaviors that are all too real to us, much like that huge tear in your pants when you tried to pick up that hologram Wolverine card you found on the floor. People ask me what it’s like to be a vegetarian all the time. Actually, that’s a complete lie. Instead, everyone begins to tell me their innermost secret lusts for every kind of meat, particularly steak. I’ve seen men break into songs, get up on top of tables, and fan dance with baby back ribs. Some people just choose to go with the regular, “Oh, I couldn’t live without steak.” What people really ask me is why I’m wearing a lobster bib at a pizza place. That’s when they realize they are actually lobsters and then I eat them.

The life of a vegetarian is full of conflict, daring, and adventure. First you have conflict, all of which happens without you even talking. People everyone are suspicious of you and your non-meat activities. It can only mean that you plan on removing their meats with your espionage group as they sleep.

Everybody has heard of one crazy kid who went off on someone for giving them honey in their beer or popcorn. They have heard of vegetarians who openly start talking about how they wish your organs would be chewed up viciously when the cows take their sweet revenge in the second coming of “Moo”. Is this what most vegetarians or cows are like? Not all the time. It’s really a shining example of the “Field of Dreams” theory of political and social concepts, which clearly states that if you build it, they will come – but they will bring along all of their crazy friends with backne that shows through their shirts.

This is what a real vegetarian looks like. (Thanks Paulo)

Next you have daring, which comes with narrowly avoiding everyone’s attempts to feed you meat. Fun Fact: When you are vegetarian for so long, your meat enzymes get all sad and lonely and run away to the circus. The Meat Circus. (Video Game Reference) So when you bite into a steak after a year of being a vegetarian, it will cause you extreme bodily pain. To non-vegetarians, this is like us giving you a pear that has crushed glass in it. Even this example might not stop the angry looks you will get when you ask if you can go to someplace that doesn’t offer just burgers and salads.

And that brings me to adventure and salads, which strangely go together. Every salad, shoved into your face by people who think you’re about to hose them down with pigs blood, is like playing minesweeper on extra hard. You poke your fork around the severed chicken heads, little bacon bits, hidden slices of ham, and that little suicide gnome with a pointy red hat to try and just get a piece of something that won’t either make you sick after you eat it or get you attacked by a fox named “Swift”.

Why do people make life so hard for vegetarians? Why do those who choose to not eat meat get meat I mean met with so much hostility? It’s much like the board game, “Candy Land”, except replace all the candy with vegetables, and replace that jerk who keeps getting all the cards you need. But replace the gloating that jerk does when he gets a color that you needed, they tell you how you’re murdering the rainforest and how their not eating a hamburger will grind the meat industry to a halt. Please do us all a favor and drown them in molasses swamp so everyone doesn’t have to deal with them.

Not wanting to murder stuff is the foundation of society. Why would people put up with so many idiots if not to wake up in the morning and not have to worry about being murdered? That's not including all the waking hours you're forced to spend with the boring and repetitive task of cutting people up with big, specialized kitchen utensils. So not wanting to get blood sprayed all over you is a typical bonus that people like when being in a civilization. Yet there is another bonus that is farther down the list that people really like, too, which is not having people tell you what to do. You hate it enough when that mall security guard busted you for stealing those Bratz dolls, a few Tony Hawk video games, and framed picture of a bald eagle.

What do these volunteer rainforest advocates call themselves? Vegans. Vegetarians are not vegans. We start with the same letter, but so does velacaraptor and I have never had another ask me to make a crappy trilogy with an expected fourth movie to be released in theaters soon. All the vegans I know are creatures of mystery and pills, sleeping in the shadows and living off of popcorn and beer. They are easily frightened, and can only be lured out of their nesting grounds with offerings of patchouli and mandrake root. This will not work with their more ferocious cousins, the fruitatarians. 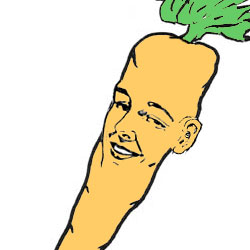 What we see before you die.

This is a lie; I know lots of decent vegans who don’t press their agenda on people. But these people also argue over if you can use honey, so I will now start laughing about them.

If this article does one thing, besides crown me the grand master dragon of the internet e-dojo, let it give a few people the idea that vegetarians aren’t going to say anything about you eating meat. You can slap those steaks all over your face, build a little boat out of them, or make your whole bed out of it. I, and many other vegetarians, won’t give a rip. Just let us eat our food, don’t bug us about what we’re eating, and we will not be forced to mention health statistics or how your “Giraffe, the other white meat” only manages to intensify the red splotches on your face.

So, in conclusion, being a vegetarian is much like being anything else. Except when we’re stuck on a deserted island together with you we’ll imagine you as a carrot instead of a hot dog or a sizzling steak.

Daily Dirt for the vertically inert.

Click here to see an interview with Lowtax is this still a link? I can't turn it off.