San Jose isn't the coolest town. It's a good place to earn a living, there are some wonderful people and plenty of parking, but it's just not the coolest.

The Internet is here, which means that it's populated by all the guys who run the Internet. Worse yet, it's also home to the auxiliary gel-headed sales and marketing party dudes who get overpaid at web companies and wanna hit the town by night. It's a pretty even mix of geeks and bros, which would be amusing if the bros were always pantsing and swirlying the geeks, but no-- they're all coworkers, so they hang out and rub off on each other. Now you've got guys with popped collars talking about Firefly and greasy Warcraft shut-ins plying the Mystery Method at clubs.

I live downtown, and Saturday night is such a human disaster zone that it's actually overtly hilarious. The first time I took a stroll around all the clubs, it was sort of like the time I went to an anime convention: the toughest part was trying not to laugh straight at people. You haven't seen San Jose until you've seen a rail-thin geek walking to the clubs with all his bros and stopping in the middle of the sidewalk to perform a deep, deep frontal tuck of his pastel green polo shirt into his cargo jorts.

This is the 'Jose, braw-- gotta get your swag on, your game tight and your tuck hella deep. Careful, dude, don't knock your cellie holster off your braided leather belt. If a HB 8.5 can't roll with the cut of your tuck, you might as well head home and pitch a knuckleball to your Mass Effect nude patch.

SA writer Josh Boruff also lives here, and he once witnessed three bros in suits staggering out of the Fahrenheit Ultralounge (it's actually fucking called that) at like 7:00PM-- two of the dudes were propping up the third, who was rocketing vomit into a full-sized black trash bag. "Are you OK, bro? Bro? Are you OK?" In broad daylight.

It also bears mentioning that there are no girls here. I don't know who all these bros are out to score, because San Jose is the Internet and there are no girls on the Internet. People out here call it "Man Jose." I don't recall ever once witnessing a girl in this town, and I've lived here for three years. I guess I must have seen some, but they're mostly the kind of designer MTV club chicks that get on-the-fly edited out of your vision. 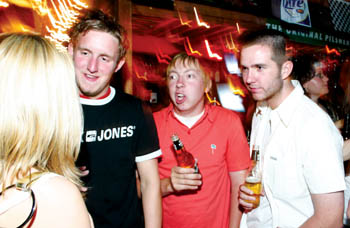 Grabbed from an actual article about the "Man Jose" phenomenon.

I even took a San Francisco ladyfriend out here to prove to her how bad it was, and we were lucky enough to stumble upon the exodus of some huge nearby event-- I think it was a spelling bee for super-rich Greek kids or something, which is about as hip as it gets in my hood. We walked to a bar full of rich Greek parents and executives in suits and resisted the urge to spend $14 on a Peppermint Strawberry Cheese Danish Mojito or whatever the fuck. Never again.

Here's a brief anecdote illustrative of San Jose chic, friends: a couple weeks ago, I was walking out to a great local coffee shop-- well, not quite local, since it started in SF and built a franchise here-- and I saw the most San Jose specimen I'd ever witnessed. Here was a nerdish dude of about thirty, shamelessly parading down the street in bright green Crocs and a fucking Popeye shirt.

Now, don't get the impression that I'm impugning Popeye here, because we all know Popeye is rad, but when you're a grown-ass man, it's time for Popeye's radness to play in venues other than your shirt. And Crocs? I shouldn't even still be complaining about those, since they were the nadir of uncoolness like two years ago, but this guy is still rocking eye-catching fuck-me Crocs in public.

For a second I thought maybe he was just a highly-functional mentally disabled guy. Crocs look like "safety shoes" anyway, but really bright-colored ones are even more so-- they look like prescription footwear that helps retarded people maintain spatial awareness of their feet so they don't trip over them. He didn't seem retarded, so I briefly wondered if he was just really good at keeping his cool in public. They can do that, right? Can't they just concentrate really hard on walking naturally and battening down their facial expression? Can they go, "OK, gotta pull it together and not look retarded," kind of like when a really stoned guy has to muster all his composure and go into "Hello, Officer" mode? 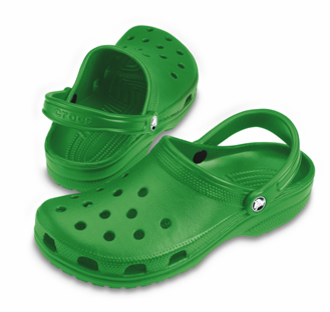 A dude was wearing these shoes. For real.
No, not retarded. He came in the shop after me and bought some coffee with none of the telltale signs of mental impairment, like browsing through his velcro wallet in slow-mo, going "NUST A SECOND" while he furrows his brow and carefully picks at bills with his thumb and forefinger.

Nah, this was just a regular guy, a grown San Jose adult, who decided to walk out of the house in green Crocs and Popeye merch. It wasn't an isolated incident, either-- I could excuse it if all his shirts were in the laundry and his cat peed on his shoes and he had to wear his shitty wife's ugly gardening shoes, but I saw him like five days later in the same spot: he was wearing neon orange Crocs and some kind of vintage video game shirt.

To be fair, San Jose isn't all deep-tucked nerdbros and Popeye Crockers; there's actually a thriving hipster scene. The major difference between the scene here and the scene in any other city in the world, though, is that San Jose hipsterism isn't based on art or music. It's all about bikes. The local youth culture is dominated by fixies, which are like regular bikes but brakeless and functionally useless (but San Jose is completely flat, so who cares). There's a monthly event called "Bike Party," during which thousands of fixie dorks ride down the street yelling "BIKE PARTEH!"-- and that's pretty much the upper coolness limit of the local scene.

BIKE PARTEH!!!
I remember the first time I witnessed it-- I was walking home from the grocery store and a few hundred kids rode by yelling "BIKE PARTEH!," and it took all my restraint not to yell "BUHK PARTEHN!" in the classic "retard voice." Hell, they were practically doing it for me.

Bottom line: you could transplant a hipster from San Francisco or Boston or NYC to any other city and they'd probably still be considered cool, but if you tried to export a San Jose hipster to any other locale, they'd get laughed right outta town. "So, hey, San Jose hipster, what kind of music do you dig?"

Now, this isn't to say that hipsters are The Raddest People, but in most towns they at least serve as a pointer to a city's art and music underbelly. Not so in Man Jose, where they seem to mill around aimlessly outside the bike shop, riding in lazy circles, waiting in vain for a scene that never emerges.

San Jose's coolness is also evinced by the fruit it's borne: bands from San Jose include Smash Mouth, The Doobie Brothers, Trapt, and, uh, Smash Mouth. San Francisco has a smaller population and a historically weak music scene, but they've produced about nine hundred times the coolness. The only San Jose act judged cool by history is the early garage band Count 5, who had their one and only hit in 1966. We're on a long dry spell, dudes.

It almost seems absurd for me to complain, since I was born and raised in a very small town in Humboldt County, far in the redwood weed-lands of Northern California. You know what, though? I still miss that place on a Friday night-- there was shit going on there. It was known as one of the best art towns in California; we had a hip college, and the local music scene, uh, existed. Bands would drive through to buy drugs between Portland and SF, and I was ten feet from some first-rate indie legends in tiny-capacity venues; in San Jose, it's pretty much bar bands, nu-metal or Bieber at the HP Pavilion.

When you have a second, check out this article vaunting the nonexistent SJ hipster scene:

To anyone who's ever lived in any other city on earth, this article is nothing but unintentionally hilarious. Hey, look, everybody! We have bikes! There's also a shitty club-kid thing nobody goes to, and even a punk house! We have a punk house now!

Tuck it in deeper, San Jose. Ya nuts still showing.

Many thanks & apologies to all my awesome San Jose friends, none of whom tuck in or wear Crocs. Some of them do the bike shit, though, but whatever.