Wolf Tracer Group's Dinosaur Island, submitted by 1000101. I was watching the horrible piece of shit "Johnny Mnemonic" a few days ago and the particularly awful "Internet 2021" portions of the movie reminded me of just how far computer animation had come. While the choppy and awkward animation was a small respite from the wooden acting of Keanu it was still about as bad as Tron, and at least Tron had a unique sense of style.

These days professional animation studios are turning out entirely computer animated movies and TV shows like "Roughnecks" the "Starship Troopers" show and "Final Fantasy" a really bad but incredible looking movie. Oh, and "Dinosaur Island", which is...holy shit is it awful. 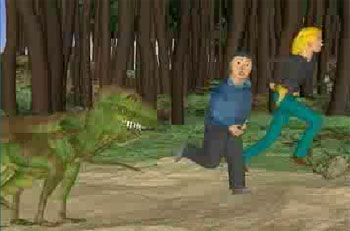 When a luxury yacht runs aground on a remote island, the wealthy passengers only wish to be rescue. But when they discover the island is inhabited by creatures lost to time, simply staying alive becomes a challenge they can't afford to lose. To the prehistoric beasts roaming Dinosaur island, the humans represent only one thing...fresh meat. While fighting for their lives, the shipwrecked survivors discover spectacular ancient ruins, people displaced in time and the dangerous mystery of Dinosaur island.

Sounds like a generic setup for a generic animated show, right? Watch the trailer and prepare to be blown the fuck away. I have friends who have done claymation movies about farting that look better than this fucking thing. Poor Mark Hamill was even somehow conned into doing a voice for this too, I'm sure it'll look fantastic on his resume. Seriously, you've got to watch the trailer, I'm laughing again rewatching it as I'm writing this ALoD. I love the way they run, it's so unbelievably bad and hilarious.