MiAs InNoCeNcE, submitted by Girl. This is one of those sites that I would swear is a joke if there weren't so many other sites like it out there. Mia's Innocence (if you think I'm going to resort to piss-poor punctuation or that stupid alternating caps crap, you need to spend more time around me) is dedicated to supporting Ana and Mia. And just who are Ana and Mia? Well, for those of you who aren't on such a buddy-buddy basis with them, you might know them as anorexia and bulimia. Yes, you're quite right. That is horrible. And so is this site.

Now, promoting anorexia and bulimia is bad enough on its own. I mean, they're called eating disorders. You'd think that right there would be enough to keep a subculture in favor of them from emerging. But this site has so much more going for it. Start with a cornea-blistering color scheme that makes me want to weep blood and any other fluids I can muster, then throw in liberal doses of misspellings and dubious grammar. And let's subtract a few more points for the repeated use of the word "thinspiration."

this is a pro ed site.i dont want anybody here that doesnt have an ed. this is a place where you can come for tips,and talk to others that have an ed and come here for support.this is a safe haven where u will not be insulted for what size you are or for anything else.you can have an ed at any size and age!!!!!fat people are not disgusting.i just want to get that straight with people. if anything, there great thinsperation. and im not forcing you to be here, you have come on your own will. i will not be resposible if anything happens to you. you can make your own decisons. here, i just give you ideas. your the one that follows through. i will not take any credit for any kind of damage and bad health problems.

If you hadn't figured it out, "ed" stands for "eating disorder." And as for the "thinspiration" promised, it comes in the form of helpful tips for getting thin at absolutely any cost whatsoever, such as:

In addition, there are plenty of pictures to look, both of horribly obese people as models to avoid and skinny people as goals to attain. Of course, some of these skinny people look like, uh, this: 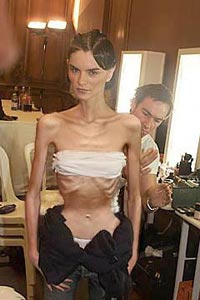 Well, she's not fat, that's for sure. Of course, you can see the outline of her spleen through her skin, but that's something else entirely. But Mia's Innocence has so much more to offer than that. When the pneumonia-inducing tips and vomit-inducing pictures just can't cut it, there are more words to lift the spirit to new heights of anorexic collapse. I'm talking about the gift that is anorexia and bulimia-related poetry. Finally, the terror of food has been brought to life with a graceful artistry that Walt Whitman would be proud to call his own, shortly before he doubled over from the pain of his stomach acids eating through his torso.

Death cam to visit me,
my ears started to tingle,
my eyes were all watery,
my arms started to swell,
i was terrified and trembling,
my stomach got all knotted
and my tongue was growing,
It swelled up so much i was choking,
i knew death was on its way,
i was so frightened,
my whole body swelled,
My shirt got so tight it cut off my circulation,
now i couldnt even see,
in and out of consciencness,
i couldnt breath, it was the most pain ive felt in my life,
and i found out i was alergic to peaches

Yes, this site has everything someone with severe body issues could ever want, short of how to build your own liposuction machine. It even has a guestbook so people can share how much this site changed their fat, fat lives. Isn't that sweet? Now just remember, like Ana always says,

Bones are beautiful! The more you can see, the better you are