A Huge E3 Scumbag, submitted by TPierce. In my last update about E3 I said, "In some ways, I feel sorry for booth babes... [they] have to put up with Lord Vondermort of the IcEStOn3 KilLAhZ Clan slowly kneading his sweaty, greasy palms into their thighs while waiting for what seems like an eternity for Vondermort's giggling friend to snap a souvenir photograph of their compulsory encounter. For some people, getting their picture taken with a booth babe counts as a date. Ughhh."

You think I was exaggerating? Check out this scummy thread. 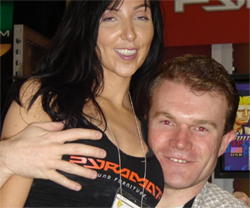 Most of the bitches push off most guys that try and take up skirts of them, grab their snatch, cup their melons and what not. But when you are a mother fuckin handicap in a wheel chair!!! THEY DON’T SAY SHIT! Fuck, even their body guards that where chasing me away the day before, where openly viewing and approving of my up skirt techniques ;)

When I could cup their tits, ass and pussy they acted as if nothing was the matter. And a few chicks OMFG let me get away with a lot of shit. So for next year I know who the whores are that I have a chance with using my penis next time around! Oh, and even the shy chicks like the Geil chick let me rub her up, even though her expression says other wise :)

And no, the guy is not really a cripple. He's just pathetic. Wow.