Following our two part coverage of the 1st Edition D&D Monster Manual, we were inundated with emails requesting we discuss various D&D supplements and source books. The most requested book was the old adventure module entitled Tomb of Horrors, which one reader described as "nothing more than killing players." While we track that one down on ebay, we decided to cover the second most requested book, the infamous and original Deities & Demigods. 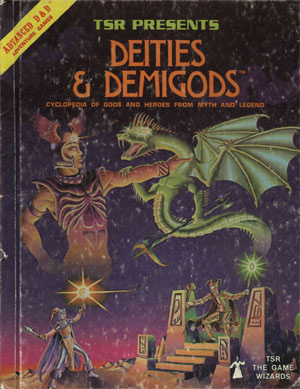 This mind-bending tome of psychedelic blasphemy was released in 1980 and contains a catalog of gods, heroes, and monsters from a variety of mythologies and world religions. This includes contemporary religions like Hinduism, ancient religions like Egyptian and Norse mythology, and fictional religions like H.P. Lovecraft's Cthulhu Mythos.

It was this last mythology that caused the most uproar when it turned out someone still owned the copyright to Cthulhu. TSR did not want to credit competitors, so the Cthulhu and Melnibonean gods contained in the book were removed in later printings.

Apparently the Buddhists and Hindus of the world didn't mind their gods being assigned hit points and spell-like abilities. Insulting mockeries of these deities continued to be featured in Deities & Demigods and its successor, Legends & Lore, into the 1990s. Notably absent: Christ.

But forget all the controversy, the main thing you need to remember as we begin our journey through the book: Deities & Demigods is a bizarre nightmare factory that easily eclipses the Monster Manual.