The Hard Times of RJ Berger (Thanks, MTV!) 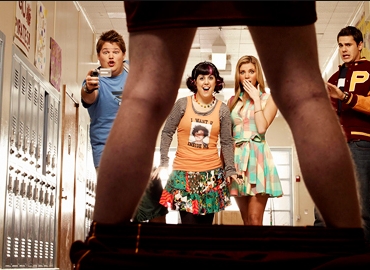 Today, dear readers, I'd like to discuss The Hard Times of RJ Berger. Yes, the site for this show is terrible too, especially the blog that uses "scandy" as short for "scandalous" and "fortch" for "fortunate," and of course the commenters. But in a bit of a departure for the section, I'd like to talk/warn about the program itself. Given that this show apparently airs on MTV right after Teen Mom, I understand that I might be a little late to the game on this one. That's alright. I'm not thrilled about being at this game at all, to be honest.

Now, for any of you who have been lucky enough to avoid this show, let me explain it to you. RJ Berger is a nerdy high school student with a crush on a cute blonde girl. Predictably, the cute blonde girl is dating the captain of the football team, thus barring the nerdy guy from being anything but a "study buddy." Oh, did I mention what allegedly separates this show from the rest of the shows where the exact same thing happens? RJ Berger has a huge dick. Yup, dude's hung like a horse, and that's important. 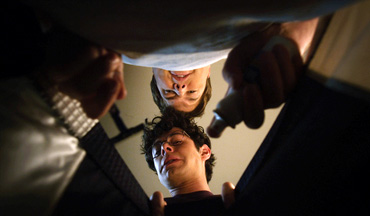 But the incredibly problematic characterization of teenagers, and especially teenage girls, might not even be the worst part of this goddamn show. The worst part is probably the dialogue, which sounds like someone beat Diablo Cody until the only two things left in her brain were sex and the most obvious of pop-culture references (basically eliminating the one other thing in her brain - entry-level "art" references). Let me treat you to some sample dialogue:

FAT BEST FRIEND: Boom! Headshot! You got pwned, biotch!
(From the episode Main Character and Fat Guy Have a Fight About Being Friends)

FAT BEST FRIEND: Dude! I think your dream girl just updated her Facebook status to single!
IDIOT MAIN CHARACTER (V.O.): ... And I just updated my status to erect.
(From the episode Chaste Object of Affection Breaks Up with Jerk of a Boyfriend, Gets Back Together With Him Because the Main Character Did the Right Thing)

Oh! Shit! Also! The main character draws anime! I totally forgot about that. Which is surprising, because that little quirk means we get to watch an anime break every single episode! Seriously, every time! It's not always anime anime, sometimes it's animated in one style, sometimes another. But its heart, its very soul, is definitely anime.

So, yeah, there you go. Really, really bad television show aimed at teenagers who can't tell if they should be laughing or jerking off to it. Don't watch it. Bad TV. Bad.

Dammit, I just remembered they all live in the town of Pinkerton. Ugh. 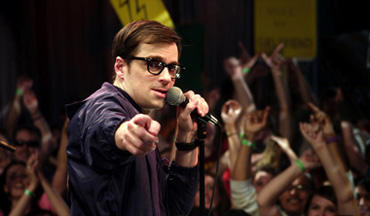