Voters in an Entertainment Weekly poll recently named Vampire Diaries star Ian Somerhalder "The Ultimate Sexy Beast," deciding he was more attractive than stiff competition such as Ms. Pac-Man and the Beasts from Beauty and the Beast (both Ron Perlman and the animated one that resembled Ron Perlman, but only coincidentally.) Somerhalder also beat out of a shitload of Twilight vampires in a contest that drew more than a million votes, so clearly he commands a crazy online following. But even someone accustomed to obsessive Web creepers might be surprised to learn he's the subject of a series of crap Photoshops that purport to show his feet being "tickle-tortured."

The 1st Celeb of the Month post goes to the man who inspired it with his hot looks, beautiful ticklish feet, sexy smile and ... ticklishness! 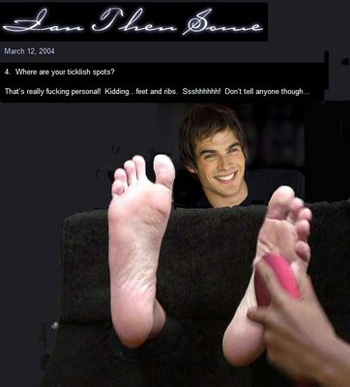 I'll say this for Ticklish Male Celebrities: The Irish lady that runs it doesn't just pick random sorta-famous dudes and insert them into the "feet shackled in stocks" template. She waits until these guys admits to being ticklish in a formal interview (or, much more likely, an unfiltered online chat), then she posts the quote alongside all the barefoot photos she can find. Oh, and apparently "Ultimate Sexy Beast" runner-up Foppish Twilight Vampire has also confessed to being ticklish; I guess the tickle-contingent votes from this blog's 20 followers probably canceled each other out. 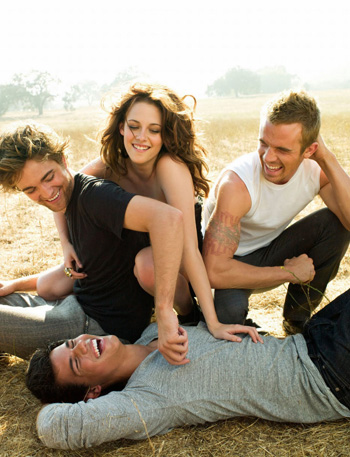