Palladium expanded its popular Heroes Unlimited series into the realm of aliens with 1994's Aliens Unlimited. 1997's Aliens Unlimited: Galaxy Guide was intended to add context to the wild alien characters of the original game. The book, like most Palladium products, tossed everything at the wall to see what would stick. Not a great method when you're trying to create a cohesive setting, but hey, cat people and mushroom-headed super models and toucans wearing power armor can fight the Predator aliens and dinosaurs. Why not? 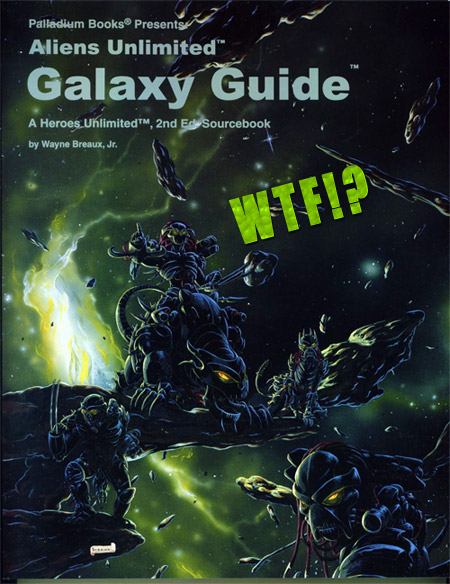 Steve: Oh, man, it's about time! I hope Palladium does for aliens what they did for heroes.

Steve: Yeah, that, or maybe make it totally sweet which is what I meant. They'll create a world of adventure where the only limit is what you can imagine.

Steve: You're imagining checkers. For babies.

Zack: If checkers included a special provision for launching volleys of micro-missiles it might have the respect of chess.