Send me a horrible video, you cretins!

This week, we're going to do things a little differently. I know the usual format here on AwfulVision is for me to post some poor hapless schmuck's horrible video -- possibly with a witty title, possibly not -- and then devote from 1 to 4 paragraphs to making really obvious and unfunny jokes about the video followed up with some real honest to god comments from real Youtubers. 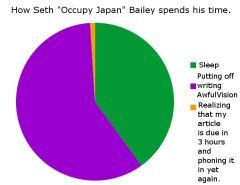 It wouldn't let me make a number smaller than 1%. Trust me, I tried.Well, not this week.

This week we're going to feature some honestly hilarious videos from Youtube. You see, since I started writing AwfulVision last summer, I've relied on both my world renown Youtube search skillz as well as submissions from readers like you to give me new material each week. 99.9999% of the time, these videos are fucking horrible and are a scourge upon mandkind from the deepest, blackest pits of Hell (and therefor perfect for AwfulVision). The problem is that I also tend to bookmark the 0.00001% of the videos that don't suck with the intention of using them at some point.

As you are probably well aware, I'm a horribly lazy and inconsistent writer (remember when I actually used to put time and effort into my updates? Me neither!) and most of these videos haven't been used... until now!

That's right: I'm doing an entire update of videos that are actually fucking awesome. Don't get too used to it, though. Good videos on Youtube are so few and far between that their occurrence is actually well below the margin of error. These videos may, in fact, not exist. For that matter, AwfulVision may just be the result of the overactive imagination of an autistic child with a snow globe. God bless us, every one.