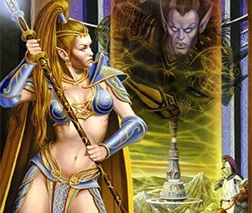 The original EverQuest was released in 1999. In video game time, where 3D and technology chips whiz things along at lightning speed, that was nearly a decade ago.

Here I am, though, looking at a press release for an upcoming expansion called "Underfoot". This is frightening for two reasons. First, the title is obviously pandering to people who fantasize about getting crushed by 60-foot tall superheroes. Second, this will be the SIXTEENTH expansion for EverQuest.

The first expansion - and the only one that I remember - was 2000's The Ruins Of Kunark, which added playable lizard people and several exciting new locations to stand around in while waiting for a boat. Curious to see what changes the game has undergone with each successive release, I did a little research.

Sherlock Rising (December 2001)
- New playable race: Rat People
- Added the /decade command in case you lose track of time, if the result is not the 1990's please do not report it as an error

Weapons Of Battle (February 2003)
- New playable race: Rat-Lizard People
- Added over 14,000 new weapon models. All of them are piled in front of the Qeynos front gate, and none can be picked up.

Return Of The Other Lizard People (September 2003)
- New playable race: Humans
- Players have a handy new mode of travel: crawling

Titty Robots (February 2005)
- New playable race: Mostly Invisible Ogres
- Added a communal pet for each server, a hamster in a cage that everyone must take turns feeding and cleaning up after

Talisman Of The Mysterious Yadda Yadda (November 2007)
- New playable race: Whales
- Questing is now easier thanks to our innovative rotating map which stops spinning when you've arrived at your destination

Corpse Run Track & Field (October 2008)
- New playable race: Wizards
- Those boring corpse runs have been overhauled for maximum fun - now your corpse runs away from you in a thrilling race that can last for hours!

Hearts Of Iron III
Like all Paradox games, when the first expansion comes out this will finally be worth buying, staring at for a few hours, then uninstalling because you feel like an idiot. 7/10

Wolfenstein
Ah yes, German occult experiments, like resurrecting dead video game franchises and giving them stealth powers so they can avoid detection until after they've been released. 6/10

Madden NFL 10
Downloadable content is the worst thing to happen to video games since Bad Day L.A., but putting Madden on a three-year release schedule with yearly $15 DLC updates would make the assraping slightly less traumatic. 6/10

Shadow Complex
A Metroid-style adventure that gives you more than your money's worth, then gives you even more when nerds melt down on internet forums because Orson Scott Card is loosely involved. 8/10