Are you the type who always turns everything into an argument? Then what you oughta read is some C-SPAM, the SomethingAwful forums' answer to all your hot takes on anything! This subforum of Debate&Discussion specializing in political discussions will knock the hodgepodge of misunderstood mush you call opinions right out of your whiny little baby mouth, with furious facts and figures flyin from experts on every tangential subject imaginable. Any and all statements will be rigorously challenged by experts. It could be anything! Like, blue bananas anything. No really! Just look what happened to Daikloktos on February 12 2020, this week in the Comedy Goldmine!

A few years ago my sister and I were reminiscing over a playthrough of Donkey Kong 64, a game I'd spent countless hours of our youth exploring in novel 3D but had been revealed by time as a plodding incoherent scavenger hunt - a position she had always held. I remarked to her "Imagine how bad it'd suck if you lived in the Soviet Union, stood in line three hours in the snow for this game, and this was your only game like it". She replied "I mean, I guess I'd fucking love it in that case. Hahahahah, wow, maybe communism has its advantages" That thought has stuck with me ever since - that a lack of overinundation retains your perspective to appreciate what you have. It's truly vast cosmic irony that a bunch of tree apes developed over millions of years to put in my hands this amusement - not even key to survival and perpetuation - of manipulating flashing lights to inhabit an entirely alien world. Against such a sweep does it matter that I could be fractionally more stimulated by Banjo-Kazooie? Only in that I know it.

Refresh me on DK64. Are there bananas in that one?

It has some deliciously coloured varieties

That first one actually exists in real life; it's even said to have the consistency and taste of vanilla ice cream 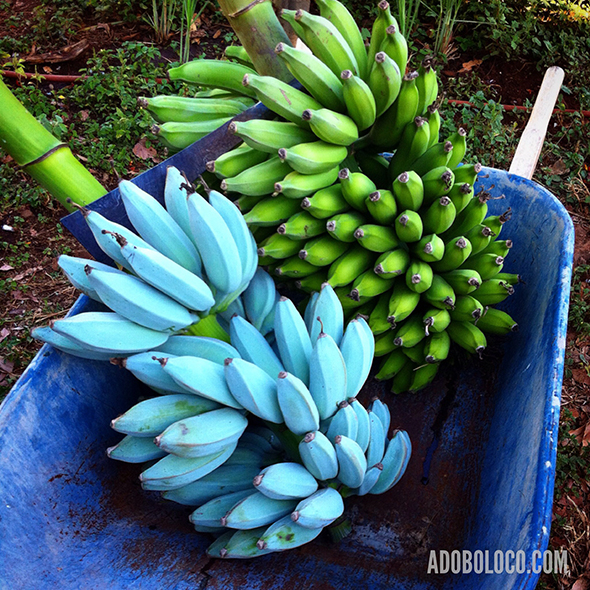 That photo is 'shopped.

There is a real cultivar called 'Blue Java' that does produce blueish bananas. They can look like this: 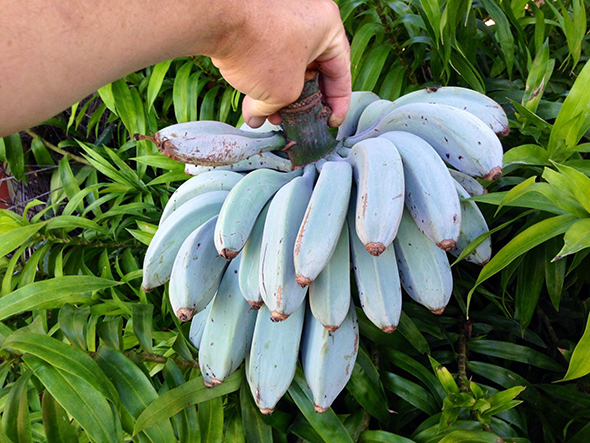 They can also look only as blue as this: 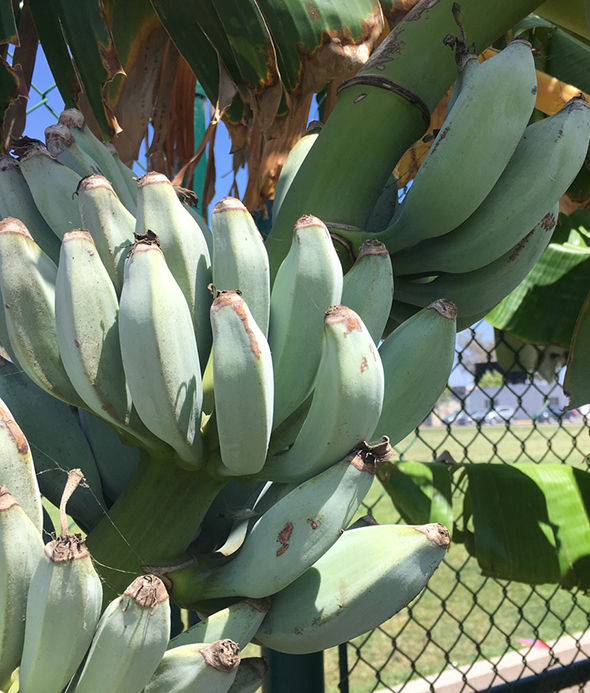 Nearly all of the plants sold as 'Blue Java' in the United States are actually an unrelated cultivar because a wholesaler mixed them up and retailers pass on the bad identification. I think that variety, 'Namwah', is the one in the 'shopped photo. It's a fine banana in its own right. Neither of them taste at all like vanilla ice cream to my palate.

'Cavendish' itself may not be on the shelves forever. Up to a quarter of banana growers' expenses go toward controlling the black sigatoka fungus. Organic farmers spend even more money slashing and burning virgin rainforest to create a temporarily sterile environment in which they can grow an Organic® crop. Once the fungus inevitably moves in, they spray shiploads of fungicide everywhere, give up their organic certification on the property, and cut down more rainforest elsewhere to meet the demand for ~organic~ nanners.

Where can I get the blue bananas

Never mind that, give me the red bananas so I can be truly communist

Eat bananas while you can. We grow them by clones and have aggressively artificially selected them so there's only like a dozen genomes left in the entire banana gene pool

There are over two thousand known varieties.

A university in Belgium hosts a collection of sixteen hundred.

To continue to be totally out of my depth, exactly how far-off science fiction is genetic companies cracking fungus-resistant bananas? Is that the sort of thing that might conceivably happen in my lifetime?

It's wild how sterile and assembly-line uniform we've crafted this fruit. I guess you can look at the Dachshund for a wilder trip over generational husbandry but there's always something compelling about food mysticism, whether it be the channer obsessed with soybeans as why there's such trans visibility these days or the corporations hoping their new miracle berry goes over as hard as the one three years ago. Plus nobody's ever knocked over a government to keep the weiner dogs flowing. 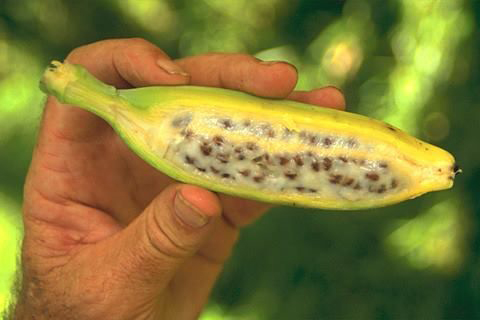 I would've got 100% on dk64, except there was a bug where if you didn't collect some banana medals in the final level before exiting the room, they became incorporeal and you could never collect them again. then like a year later I did it all again and was careful to get those medals. essentially I got 101% twice. the residual psychic trauma is a part of why I am so fucked up today. ama

It's shameful to admit but I got stymied as a kid having to beat the classic arcade game to face K. Rool so I played it twice, extensively, as well. The first time my father ever showed anger towards me was when I screamed at the minigame where you herd the beavers into the hole that it was a cocksucker

the list of 1 and 2 is pretty comprehensive at this point, 3 and 4 we're working on 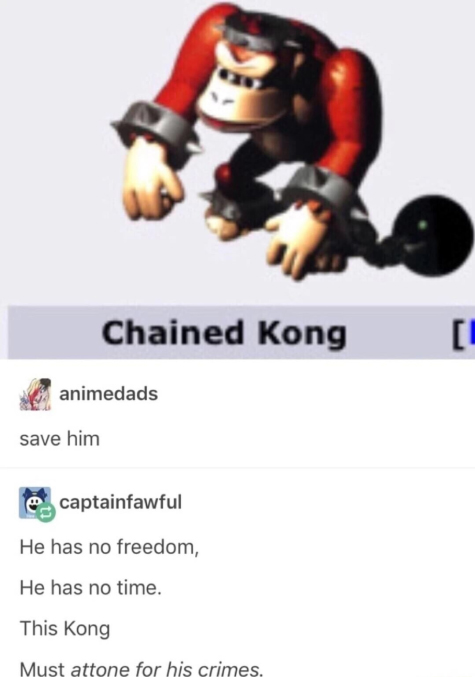 Chained Kongs were thought to be POWs of the Great Ape War, unlike Mankey Kong, who is known to be a traitor to the Kong Kause.

I got every single collectible and every single thing in that game... except for one golden banana - the banana from lanky rematching the bunny. I spent hours trying to get it and gave up. I never got it and now I wander the world hoping Bernie gets that hen. 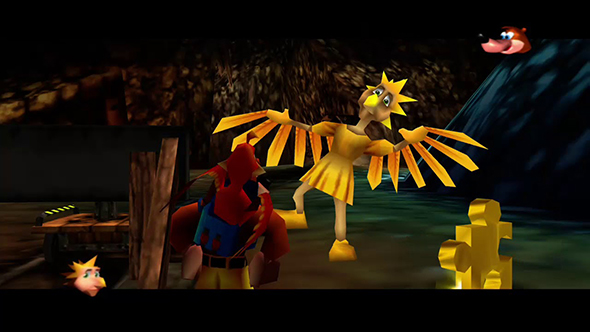 the rabbit is literally broken, you have to use a glitch to start early or you cannot win (you can also get lucky and have the rabbit get stuck on the enemy in the tunnel).

The idea that companies will develope fungusresistant bananas is fiction, but not for the reason you think.

First let's talk about banana genetics. The joke about bananas is that they haven't had sex for ten thousand years. There is a kernel (that's a pun) of truth to that. Edible cultivars are sterile, almost by definition.

'Gros Michel' could not be bred with 'Cavendish' to get something that's resistant to Panama disease.

However, the forebears of edible bananas were not sterile. We can go to the wild relatives of the domestic banana, breed within each species for fungus resistance, cross two species to get a seedless hybrid, and see how it performs. We're not modifying a known tasty variety to be resistant to fungus; we're pulling a slot machine handle and hoping to get something that tastes good and grows well.

Sexual reproduction is great, but there is another way. Clones can diverge through mutations. This can be accelerated with the atomic gardening that gave us the ruby red grapefruit (no, really), but it happens through the centuries regardless.

At around the time the (western) Roman Empire was a going concern, someone in the area of the African Great Lakes obtained a single banana plant. In the centuries since, bananas have flourished in the region. There are now some two hundred cultivars. The majority are picked green and prepared somewhat like a potato, steamed and mashed. There are at least a dozen cultivars that are specialised for beermaking, the banana equivalent of cider apples. Ugandans eat a quarter tonne of bananas per person per year.

So why did I say that companies weren't going to create fungusresistant bananas?

Simple: these are all national efforts.

Another way forward is genetic modification. This is faster than breeding and produces more consistent results... There is still a way to use modern biotech in a limited way by breeding bananas the old fashioned way, then looking at their genes and seeing how they turned out in important areas. This saves a lot of time over putting seeds in the ground and waiting till they mature.

Ugandans cannot afford to be so precious about their food. They're genetically modifying bananas to be a better source of vitamin A.

There is westernfunded opposition to GMOs, but it's tough to argue against "not going blind".

They are using genetic modification to protect the crop they need to survive.

The great threats to the West's favourite fruit are, in the final sense, ignorance and greed.

DK Isle is clearly a banana republic though

I really need to do some more research about all the crops government programs have produced, I know in Canada our federal experimental farms have developed a lot of cold-resistant cereal crops. I'm guessing that most of the shit we rely on to sustain ourselves were spun out of government research because capital would never be willing to take on that kind of risk, go figure

can you use a banana as a buttplug, this is kind of time sensitive so please answer soon

anything can be with a little bit of engineering

A banana blossom has a more traditional shape than the fruit. 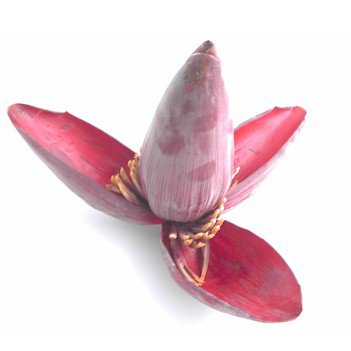 That may look like a flared base, but the "petals" (actually modified leaves) at the base are too flexible and would fold back readily.

You'd have to leave it attached to the banana bunch for safety. 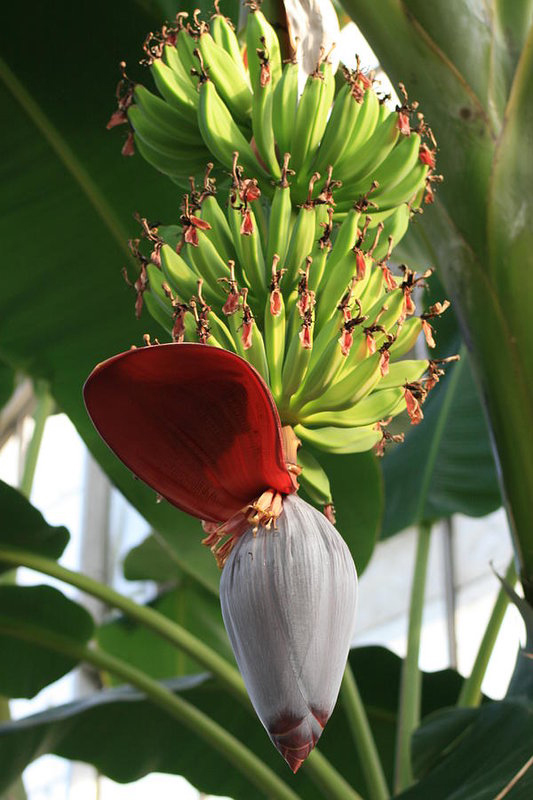 his coconut gun
can fire in spurts

if he shoots you
it's gonna hurt

Banana question: I've done some cursory looking into plant factories and other climate-independent growing methods. How can or should we grow bananas locally or in post-climate change hell world?

The good news is that bananas aren't too picky about climate.

As long as it doesn't get too cold, they're O.K.. They're not like some other plants that are overly sensitive to heat or require particular humidity or seasonal variation*. They'll just keep growing.

It's already possible to fruit bananas outdoors in places as strange as San Francisco. With climate change, bananas will grow a little farther north.

Climate destabilisation will of course cause a net loss of productivity, but many other crops will fare worse.

*There's an exception in fe'i bananas. Pacific islanders domesticated an entirely different species of banana than the one that spread everywhere else. Fe'i bananas grow well in the tropical highlands and nowhere else. Colonialism hit them hard and now climate change threatens. The banana belt will be pushed farther up the mountains, possibly disappearing entirely.

Follow-up question: can you make exploding bananas like in SS13

We'll be stretching the words "exploding bananas", but yeah.

Gram for gram, dried bananas have three times the energy of TNT.

It is, however, more difficult to quickly release the energy in a banana.

What it would take to make an explosion is grinding dried bananas into a fine powder, suspended that powder in the air, and lighting it.

Such explosions have happened in facilities where flammable powders are present, including sugar, starch, coal, sawdust, and metals.

Thermobaric weapons are a packaged version of the same phenomenon, delivering a flammable powder to the target, dispersing it into the air, and igniting the cloud.

he has no style
he has no grace

this kong
has a funny face

Bananas are counter-revolutionary, while we attempt to bring humanity to it's noble destiny among the uncorrupted stars the banana-likers are content to squat among the apes, consuming their relics of our brutish forebears

Yeah! Bananas are nature's turds. Not even a fruit just a giant deformed bean.

If you read the thread you might have caught on that bananas are not, in fact, actually something monkies ate in trees. They're the result of humans cultivating nearly inedible plants. They're no more a natural thing than your phone or computer, and the only one content to squat in ignorance is you.

This thread is bananas.

Thanks to Daikloktos for throwing their blue-banana ignorance onto the fire for this week's ceremonial sacrifice! Join the forums for just $10, and you too can reap the benefits of knowing exactly how wrong you are about everything in excruciating detail!