Monday, Jan 20, 2003 by Rich "Lowtax" Kyanka (@TwitterHasBannedAllMyAccountsEver)
Gambling is one of humanity's major vices, ranking up there with drinking, lying, coveting thy neighbor's stuff, speeding, and drawing "erotic" Chip N' Dale fan art. It should come as no surprise that the SA Forum Goons love gambling just as much as the next guy, assuming the next guy enjoys posting on a forum and using Photoshop a lot more than gambling. Today's Goldmine is about pressing your luck, letting the dice fall where they may, putting the money on the line, watching a good cop go bad, being framed for a crime you didn't commit, and all that other cliched garbage. The ever-so-creative forum folk found two websites which pull up random images: http://www.diddly.com/random/ and http://homepage.tinet.ie/~fuzzbucket/google/, both of which dredge up random photos from the wasteland of the Internet. The challenge was to take one completely random image from each site and combine them into one lump of non-sequitur nonsense. Sure, a few of these Photoshops stink, but it's the thought that counts. Unfortunately I can't quite remember what the appropriate thought for this would be, but I imagine it's really good. I mean, like really, really good. I'd bet my life on it!

666 pulled up a flaming fratboy and an exciting, action-packed scene from what appears to be the Civil War. The results? I don't know, but it has a drop shadow! 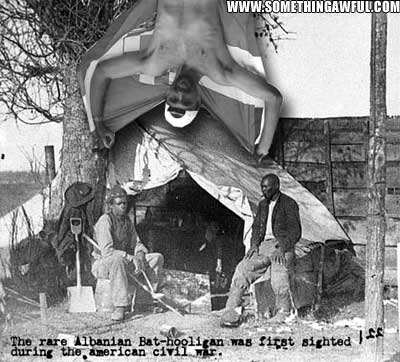 acyd puts a little "spin" on the popular game Jenga. Ha ha, "spin," get it? That's hilarious. I would like to thank the academy and my parents for making this joke available. 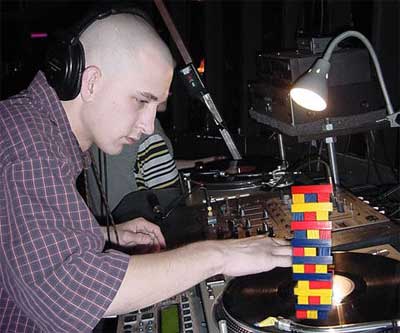 assx2in8 has a dumb name, so I'm not going to caption his image. SORRY, PAL! 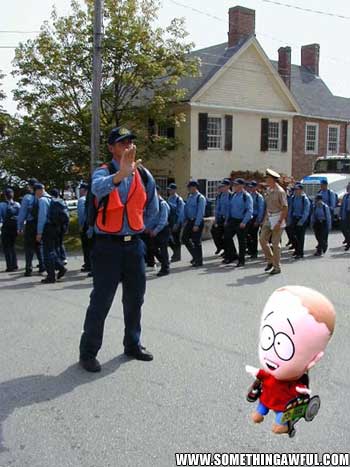