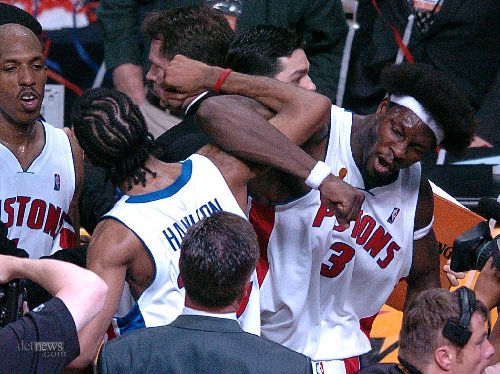 I'm really excited about Detroit going to game 7 tonight, but the truth is that I haven't really paid attention to basketball in the last 5 years. I was really into it in the late 80s and early 90s during the "Bad Boy" era of the Pistons when Joe Dumars was my hero, but somewhere in the mid-90's the shooting percentage plummeted, high school students started getting drafted, primadonna superstars were on the rise, and you couldn't guard anyone without getting a foul, thus slowing down the whole game. It was awesome to see team like Detroit, one without any ego-starved stars, work as a team to win to beat the Lakers last year in the finals. This year's finals have been the best since 1990, and I'm starting to regain some faith in basketball. That and there was no fucking hockey this year. COME BACK HOCKEY I MISS YOU!

I Got Care Bears and Monkeys

A story: a few days ago I went to Cedar Point for some fun and frivolity. I was passing the game booths when a large bosterious woman shouted earnestly "I got Care Bears and Monkeys!" This proclamation directed at a shuffling, uncaring populace struck me as extremely funny and I started laughing so hard I had to sit down on a bench. I never recovered and ended up getting a sunburn and going home. The End.

Its an awesome game and if you don't buy it you suck. Don't give me the "I'm too poor" excuse. Rob banks, sell drugs, write jokes, do whatever you have to do to aquire this game. My game name is "frolixo69" because some dick already took frolixo.

I really have been to 3 weddings this month and I have 2 more this summer. A lot of people I know are getting married. The fools! During the boring parts of the wedding like the ceremony and speeches, I kept thinking of the worst thing I could do to make an ass of myself and ruin the whole affair for everyone involved. Of course I would never really do any of them, except for the getting really drunk part and putting my penis in the chocolate fountian.