Friday, Apr 22, 2005 by Reid "Frolixo" Paskiewicz
Welcome to this to optional, freeflowing, train-of-thought pseudo-Livejournal full of half-assed ideas, inspiration, and anything else we feel like writing about but know isn't entertaining enough to warrant a full article or front page feature
It's So Dark In Here 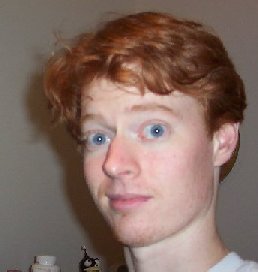 Hi, my name is Frolixo, and I'm gay for Legolas.

This has been a really rough last couple of weeks folks, but I’m glad have such a great bunch of people to support me through all of it. I’m talking about my drug dealers of course. Without them, these past weeks would have been impossible, and without that last surge of PCP there was no way I could get this update on in time. Thankfully Zack stepped in for me yesterday, and I already sent him a crate of fresh lobsters in appreciation of his favor that he should be getting right about now. I know he is deadly allergic to shellfish, so I hope he gets my dark humor and there is a hospital close to his residence.

But seriously, these past few weeks have been really shitty. I’m going to use this opportunity to bitch and moan about them so you can all laugh at my suffering and ill luck. Karma is a bitch.

Wisdom teeth: I am not a very smart person and this was reinforced by the fact that I waited until I was 26 to get my wisdom teeth removed. All four were impacted and the extraction was extremely difficult. It seems that during the process they hit a nerve and my bottom lip and chin are still numb. I’m not sure if it will come back in a week, a month, or I have permanent nerve damage, but some people think that dribbling pudding all over yourself is endearing, like a baby deer standing up for the first time, so I don’t really mind that much. Then on Wednesday night as I was preparing my update, I got a dry socket and was in a buttload of pain. Thankfully, Zack stepped in for me so I could gobble down some Vicodin and dream about Batman. So learn from my mistakes kids, get your wisdom teeth out early!

I gouged my eye with a Frosted Mini-Wheat fiber: It’s true. A few weeks ago I was eating some frosted mini-wheats while sitting at my computer and when I bit into a biscuit, a fiber shot like a dagger into my eye. I screamed and fumbled with my hands towards the searing pain, dropping the bowl to the ground. I was temporarily blinded in the eye for a few days and wore a patch I had lying around the house for just an occasion. When I went to the eye doctor and he put the dye drops in, he saw that there was a deep gouge in the eye, probably caused by the fiber that flew into my eye. From now on I eat all my cereal with safety goggles.

Car accident: Last week I also got into my first ever car accident, which I talked about during my last update. I took the car to a Ford dealership to get it worked on and it took them one week and $850 to replace a front bumper. What a bunch of assholes. Also, I think that old people should not be allowed to drive and they should be rounded up and ground into a nutrient paste to feed the starving children of third world countries. Except for my grandparents because they are cool.

I slammed my penis in the microwave door again: I’m really getting sick of this. The design of this microwave door is so stupid. I can’t help that my penis is unusually large and gets stuck in all types of doors and latches. Forget about microwaving my hot pocket in the nude anymore. 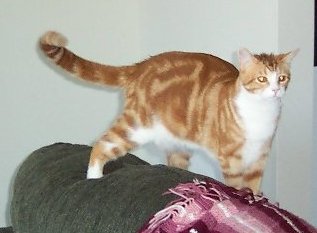 This is my kitten, Bella. She is retarded.

A little something about me

Since everybody else talked about their history with SA, I’ll give you a brief summary on how I got here. I’ve been a diehard fan of the site since late 2000 and would read it every morning when first getting to work. I especially liked Lowtax’s pranks and Zack Parson’s historical updates, and they became the abusive, drunk, gay fathers I never had. When I finally saved enough pennies to roll up and take to the bank, I bought a forums account in 2002 and started posting some well received threads that were done in a front page style format. I started stalking Zack Parsons and after he found my plans to kill him and make a cape out of his hide, he adopted me and taught me how to make love to a woman and scold a child. Soon after I attended a Chicago goonmeet where I met the morose and shifty Livestock for the first time. Both Livestock and I slept on Zack’s floor and drank all his beer that weekend. Before I left, I planted a gnome in Zack’s house to spy on him and provide me real time GPS information and stock tips. In 2003 after a weekend spot opened on the front page, Lowtax held open auditions for front page submissions. I wrote the farming update and was hired for the position with the stipulations that I wouldn’t make all my updates about gnomes and pigs. Of course I broke this agreement, but I am still here today and I’m having a great time making an ass of myself in front of thousands of strangers on a weekly basis.

I also want to use this opportunity to post my weekly “Shit List”. These are people that have wronged me and are currently on a queue to get a savage beat down by yours truly. Their names may go up or down depending on how badly they fucked up. Watch your step so that you don’t end up on my Shit List. Once you’re on the list, there’s only one way to get off: the emergency room.

1. Danny Fredrickson (Beat me up every day in middle school)
2. Ben “Greasnin” Platt
3. Mitch Albom
4. Dan Rather
5. The guy who cut in front of me in line at Wendy’s.
6. Adolf Hitler
7. Mr. Hanson (My gym teacher who failed me for wearing underwear in the shower)
8. Jeremy Fathers (A co-worker)
9. My dry socket
10. Shmorky