Sunday, Jun 29, 2003 by Taylor "Psychosis" Bell
A few weeks ago I unleashed my latest review upon the world, an updated version of an article I wrote sometime last year about a game released in 2001. Despite my obvious commitment to cutting-edge, up-to-the-minute journalism, the kind of journalism that is simply too extreme for non-hyphenated adjectives, certain people read the article and came to the inevitable conclusion that because I hate a game from Korea, I also want every Korean in the world to die. These certain people apparently decided that the best way to express their displeasure with my article was to send me long, rambling, angry messages informing me that I am both a “stereotyped motherfucker” and a “dickcunt-sucking shitlick.” How did I react to such a sudden and brutal onslaught of flame mail from people who apparently thought up insults by randomly copying and pasting titles from hentai games? You will find out when you see a sample of the hateful and scathing messages I have been smacked upside the chops with, in this first and only episode of...WHEN RAGNAROKKERS ATTACK! 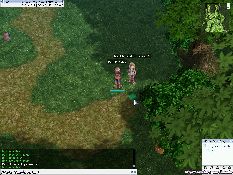 Since I uninstalled Ragnarok Online about eight or nine nanoseconds after I wrote the original article about it, I was afraid I wouldn't have any pictures for this article. Fortunately forum goon Shizuka saved the day, offering some high-quality screenshots of himself confusing the hell out of other people in the game!
Before we proceed to the parade of idiots, be sure to note that my article was not a Truthmedia review, and was not written intentionally to get people to flame SA. In fact, I anticipated a few people might be upset that I was insulting Ragnarok Online for a massive gameplay flaw that all MMORPGs have, so to deter them from emailing me I mentioned that my criticism of the game should be taken with a grain of salt, since I have never enjoyed an MMORPG. However, this paragraph did not stop some people from reaching three highly scientific conclusions.

I made fun of a game from Korea, therefore I hate Koreans.

I did not differentiate between North and South Korea in the article, therefore I am unaware that they are two separate countries.

I insulted Ragnarok Online, therefore I enjoy licking shit and sucking dickcunts (whatever those might be).

With those three points in mind, let’s take a look at the first message from the young and vibrant Derek Seagal, who seamlessly combines a complaint about racism with some very interesting “Everquest is bad too, therefore Ragnarok Online is good” logic. Let’s take a look!

Ruh roh, he’s on to me! You see, by mentioning that people eat dogs in Korea I was actually condemning the entire Korean culture for heinously allowing people to eat a noble creature that inhabits millions of American homes and heroically performs important duties like “shitting on the carpet” and “repeatedly attempting to eat any object smaller than your house.” Most of you readers foolishly thought my comment about dog-eating was a joke, but good ol’ Derek Seagal saw through that facade and realized the horrible, horrible truth: when it looks like I’m reviewing a game, I’m really reviewing an entire race of people! AND THE KOREANS SCORED A ZERO!