Grizzly Bear's Veckatimest recently became the #8 album in the country, due to $3.99 Amazon downloads, fawning reviews and the fact that 33,000 copies qualifies for Top Ten status in this pathetic music-buying climate. No matter how "big" it gets, though, Grizzly Bear will always attract the most unintimidating following imaginable, consisting entirely of latent hippies disguised as hipsters. These prematurely enfeebled fans boast the musical taste and muscle mass of 61-year-old Woodstock survivors, and Grizzly Bear speaks gently to their delicate ears.

'Droste, who is gay, has dark Cary Grant hair, broad shoulders, and a geeky suaveness.' -- New York magazineGrizzly Bear certainly has the highest "who the fuck is that?" factor of any Top Ten band I could ever select (except the current #7, Wisin & Yandel. No fucking clue.) They're poised near Lady GaGa and Taylor Swift on the charts, yet absolutely no one has heard of these guys except music blog writers/readers and other musicians with which they've played.

Radiohead toured with Grizzly Bear, and guitarist Jonny Greenwood called them his "favorite band in the world," stoking fears that for its next project, Radiohead might lock itself inside a rustic shack to write fruity barbershop-quartet songs. Apparently, though, Greenwood was just adding his voice to a nearly unanimous chorus of praise, which has started to resemble those ape-shit harmonies Grizzly Bear does all the goddamn time.

A feature in New York magazine purports to explain how Grizzly Bear "became everybody's favorite New York band." "Everybody" requires just one debunker in order to become demonstrably untrue, and I'm comfortable being that solitary contrarian, because I'm pretty fucking sure that in my personal hierarchy, Sonic Youth will never be usurped by a Precious Moments version of Crosby, Stills, Nash and Young.

Still, Grizzly Bear sucks less than previous "everybody's favorite" New York bands such as The Strokes and Interpol (I refuse to believe The Bravery has ever been anybody's favorite band, let alone everybody's), so I'll continue reading this profile. Maybe Grizzly Bear's personalities will prove more compelling than its symphonic somnolence. Let's look at some details from the first paragraph:

OK, so the people who produce this glorified NPR bumper music are "yuppie nerds." At least they have consistency going for them. Also, "robust" is exactly the word several sites have used to describe Grizzly Bear, demonstrating the parallels between wine snobs and insufferable music reviewers. In the words of Rich "Lowtax" Kyanka, "whenever I see the word 'robust,' I picture a morbidly obese homeless man wearing a shirt that's too small for him, and the buttons are just about to pop off." Unfortunately, an image search produced nothing of the sort, but it did randomly generate a shirtless Iggy Pop, scarf flapping in the rotary-fan breeze. Grizzly Bear sounds nothing like that picture.

Anyway, let's address Droste's premise that eating beets might make Grizzly Bear seem lame. Beets actually qualify as edgy compared to Grizzly Bear. They can make you gag and pee red. Grizzly Bear is more like a bottle of pomegranate juice, which the incomparably dorky Droste once dressed as for Halloween: Self-impressed people ramble on about its merits -- so healthy, so robust -- until by the time you taste it, it's an inevitable fucking letdown. 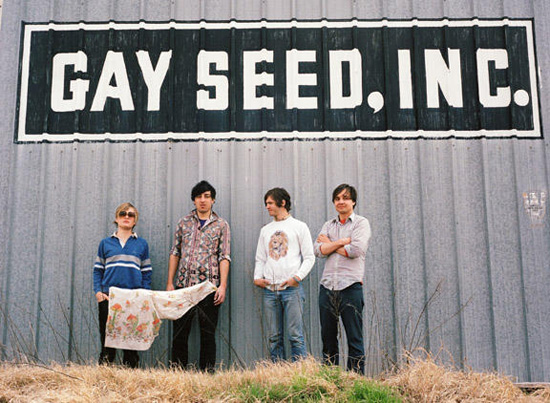 What the fuck is happening behind that Fun Sheet?

On Veckatimest, Grizzly Bear seems to have literally conjured the ghosts of late-'60s folk-pop, summoning the synchronized ghostly moans of Gram Parsons, dead Byrd Gene Clark, and Brian Wilson's buried brothers. The group relocates the Beach Boys' multi-layered harmonies from Surftown U.S.A. to some rustic snowed-in cabin, displacing most of the good vibrations in the process. It's good time oldies made gloomy and new for boring youth.

People describe Grizzly Bear as "epic," because the band's droning feyness and relentless scale-singing make four-minute songs feel like they last at least twenty. They also label Grizzly Bear "experimental" due to its use of varying approaches. For example, "Cheerleader" starts out with some gay-hippie funk, then devolves until it sounds like sensitive men crooning about their feelings around a campfire while pounding a drum circle.

Occasionally, Grizzly Bear starts "rocking out," which is cute in a declawed-kitten-swiping-furiously kind of way. The idling electric-guitar crackles and modest crescendos flash back to the dark ages before Blue Cheer and The Who and fucking Manowar invented rock volume, an era when people would hear Donovan and think "whoa, that's heavy."

With Veckatimest, Grizzly Bear has created a Pet Sounds for our generation. Unfortunately, subsequent generations don't require superfluous revamps of existing albums that remain widely available. And because these compositions were so fastidiously arranged in the studio, Grizzly Bear can't replicate most of them during concerts, making the whole exercise even more pointless. At least live audiences can still witness the group's weird "Motownphilly"-style vocal acrobatics. Grizzly Bear is that chamber pop/a cappella vocal soul hybrid no one requested, Beach Boyz II Men. 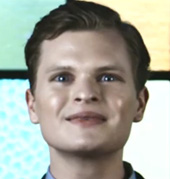 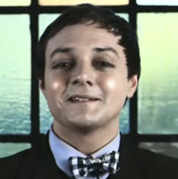 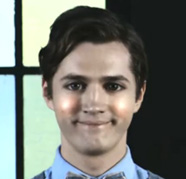 On the bright side, I enjoy the "Two Weeks" video, both because it reveals that the group's members look just as much like freakish church-choir mutants as I'd imagined and because it makes it easier to bear the repetitive plinking of a single piano note when I know the clip's going to culminate in the offenders' heads bursting into flame.