Looking back on the year 2012 in music, two significant events come to mind. The first was when true music fans across the globe united to vote thumbs down on Justin Beiber's song, to tell him that they didn't like his song and he should feel bad for making so much money from singing it. The second was when I had a Black Ops hallucination during the Mastodon - The Hunter tour because I had both Monster and Rockstar energy pumping through my system simultaneously, a state of mind I call "crossergized." Other than that, music milestones of 2012 are best described by professional music critics, then summarized or restated by people from the internet. - Skylark

Key Quote: Currently, his Twitter bio reads: "i don't know anything. & neither do you." In Frank Ocean-speak, that's not a statement of ignorance but rather one of wisdom.

Iraff
Though at first paradoxical, he makes sense in a sort of twistewd Frank Ocean-speak. we truly must "agree to disagree", a statement that produces not conflict, but peace.

WET BUTT
Midway through the record, Ocean describes a strange scenario in which these guys are in a cave seeing some things on the cave wall. Many people would think this is just some weird stuff, but Frank Ocean is never so simple.

Key Quote: This is rap as Rorschach blot. I see it as one-part gentle eulogy for the early 00s underground scene that Rock once ruled, one-part requiem for the naïve certitude that cloaks all teen dreamers. Picture a prep school Conan O' Brien Frankenstein in headgear being taunted by grotesque peers. Good times.

Skylark
Imagine a young Conan O'Brien. He's probably going to some private school and is still many years away from recording his forgettable voice-acting cameo for a Futurama episode about the evil Santa Claus robot, although deep down, maybe subconsciously, he's aware of his destiny. Imagine the other spoiled students at the school, each of them deformed in some way, who mercilessly bully Conan. For Conan O'Brien himself, this scene is the stuff of nightmares. But, as this piece points out, spending your time imagining this may be connected to having good times in some way. If you want to pursue good times with more reliable methods, it's your choice, but this seems legit.

Key Quote: When Ben Stiller's fussy, pedantic "Greenberg" character painstakingly assembles a mix for Greta Gerwig intended to display the breadth and depth of his pop-culture appreciation, he slides Ram's "Uncle Albert/Admiral Halsey" on there. It's the song we see her singing along to enthusiastically in the following montage.

Skylark
This critic makes the most common rookie mistake in music journalism: He lets his review of an album turn into a review of Greenberg, starring Ben Stiller as Roger Greenberg. It happens to everyone from time to time. What people in the industry say to do to get back on track is to pause Greenberg, which usually works ... but then you aren't watching Greenberg. It's romantic, it's cute, it's well-acted, it's a whole lot of fun - and at times, it's downright sexy. 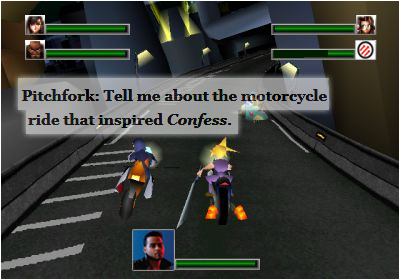 Review: The Hundred in the Hands, Red Night

Key Quote: Ignore that date an inch or so above this thing, throw on Red Night, and ask yourself, "what year is this?" Do you want it to be 1999? You could do a lot worse-- Timbaland was at his creative peak, the strength of America's economy could be demonstrated by Memphis Bleek going gold, and you'll get to hear The Soft Bulletin for the first time again. Maybe you weighed 20 pounds less, too. Heady times, all around.

Skylark
Rewind to 1999. 1998, the previous year, has been over for months. 2000 is approaching. You can sense it& you can almost taste it. Flash forward back to 2012. You're taxonomizing the 90s, and spending an inordinate amount of time fantasizing about being a child because you're incapable of dealing with your responsibilities as an adult. You could go poop and pee in your diaper and it was someone else's responsibility to take care of it. Keep going toward 2014 at normal speed.