Horse The Band polarizes metalcore communities, and the metalcore thread in SA's No Music Discussion forum is no exception. People who consider keyboard breakdowns and video-game analogies irredeemably nerdy reject Horse The Band outright, as do people who are skeptical about potentially ironic mustaches, and people who think any music associated even remotely with hardcore should be serious fucking business. But you don't have to be an arm-chopping member of the Cutsman Dance Crew to appreciate the group's rapid-fire responses to hecklers, or the way it has booked its own bizarre world tours, playing countries that rock bands seldom visit. Horse The Band has had more interesting experiences than most touring acts, and they can also tell their stories in a more entertaining fashion. So we asked them about their travels, and pizza, and whatever else came to mind. For more amusing material from Horse The Band, check out their recently released DVD 48 Hours in Ukraine. 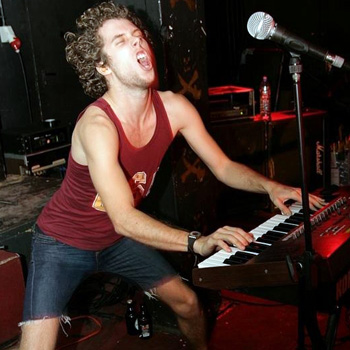 SA: Where does Horse The Band rank in the "filthiest band alive" standings?

HTB (Erik Engstrom, synthesizers): Any good filthy band does not go hand-in-hand with the word "alive."

SA: As someone who coined the term "Nintendocore," please rate "crabcore" solely as a genre name.

HTB: We recently grew as people and play Crabgaze now. Nintendocore is done. It's garbage. Crabgaze. It's a little more shoe-gazy than traditional crabcore. It's pretty good. Crabgaze.

SA: Which is your favorite of the ten plagues of Egypt?

HTB: It is hard to pick. I don't think I would really like any of them. What would happen to status updates... like if the plagues of Egypt happened today. You guys, did you hear all the water in Egypt turned to blood? Text Egypt to 90990 to donate $10. People are so smart and compassionate. It is so inspiring.

SA: As pizza connoisseurs, what's your opinion of the Domino's Pizza "Sorry we've sucked all these years, but we're actually good now, we promise!" advertising campaign?

HTB: I think it is the future of advertising. It's very compelling. It isn't an advertisement for pizza. It is an advertisement for starting your life over. Everything you knew and were bored of is all gone. It has the same kind of appeal as going to Japan. A different world. They use real cheese now. It makes you want to find out what that tastes like. It offers escapism to the layman. It is like a new reality beckoning. I love those guys. 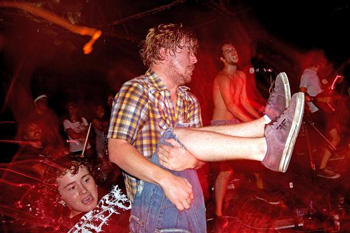 "I like Suicide Silence but right now I am afraid."


SA: Earlier this month, Chiodos explained that they had "opted to keep their frontman selection a mystery." Last week, it was revealed to be Brandon Balmer of Yesterdays Rising. Is this the singer you'd chosen in that "Who Will Be The Next Chiodos Frontman?!?" selection pool that's been sweeping the globe? If not, who did you think it was going to be?

HTB: I really... don't know what I thought. Sometimes when you stay with people on tour they are really obsessed with some other band that they talked to once or something. You would be surprised that bands are mainly made up of "one of the nicest dudes ever" or sometimes even the actual nicest guys in the world. You really envy those people you stay with, I mean, imagine, having the opportunity to know and be friends with the actual nicest dudes in the entire world!

I think that happened once in Edmonton at some Maploid's apartment and he was close friends with some of the most legit dudes in the world: the dudes in Yesterday's Rising. We had to watch all their videos that night and then look at the merch they had signed. I felt pretty excited to see all that stuff in real life. We heard about how they rocked the Warped Tour. We even heard a story about how the singer hung upside-down from a pipe in the ceiling while singing once. I guess it was a pretty wild night! I am actually pretty certain the guy even had the opportunity to smoke weed with that band. So it is understandably tough to see them go... But Chiodos can continue as a result, and honestly I am glad to see that happen.

SA: You've written "all the shows were fucking awesome except Turkey, Italy, the UK, and Scandinavia." A fan cites Scandinavia specifically and asks "what's up with that?"

HTB: Well, just like our "fan" doesn't know "what was up with that," you could take his experience and extend it to the whole population of Scandinavia. Meaning, everyone doesn't know why they sucked, because no one came to the shows. But that is why they sucked. It's a better question for him than for us. Anyway, anyone who was at the shows could explain to you very easily why they sucked. People in Scandinavia dress really well, though. I'm surprised they don't commit suicide immediately upon entry to the United States.