The ABCs Of Music

There are people who have never heard of music. Perhaps we're talking about a hapless naif who was sheltered by her overly protective parents, or maybe a bashful fellow who was misdiagnosed with an allergy to all forms of art because his face turned red when he walked by a Renoir painting of two dogs performing oral sex on one another.

This update is for those people. It takes everything there is to know about music and whittles it down to the most important concepts in the form of a handy alphabetical reference.

A is for Anime Theme Songs, which are representative of music as a whole. There are sounds and a person makes noises with their mouth. The lyrics that come out of the person's mouth tend to be flowery and personal in an overly specific way, such as: "Blossoming in the moonlight, longingly look into my lazy eye, you reach out and caress my yearning, strawberry cool cool souuuuuuul!" 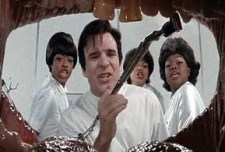 B is for Backup Singers, a group of at least three vocalists perched backstage at a concert, ready to dash in and take over at a moment's notice if a singer is shot or suddenly dies of old age.

C is for Christmas Album, the warm blanket an artist nestles into when they get tire of relevancy.

D is for Drums, the instrument you play when you really just want to take your shirt off in front of people. A drum kit is very complicated and has a lot of pieces, but I'll let you in on a little secret: All you actually need is one drum and one cymbal. When you see more than that, the extra drums are simply there to look impressive. They all make exactly the same sound.

E is for Effects Pedal, a device that you step on to make an electric instrument sound different. It is powered by a car engine, and the sound it adds is that of a car engine revving (depending on how much pressure you apply to the pedal). Not recommended for garage bands that practice with their garage doors closed.

G is for Guitar, the instrument that you play when you are "that guy" in a backup band for an actor or a teen pop sensation. You know, the awesome dude with a mohawk, a chain on his wallet, spiked accessories, maybe some tattoos. The sort of guy that personifies being a scary punk/biker that simply doesn't give a fuck what society thinks, rocking out as a vocalist sings about texting.

H is for Harry Connick Jr., a nice young man whose music certainly featured a piano. He might also be from New Orleans, though I'm not sure. It's not like he ever mentions it or emphasizes his accent. He portrayed a fighter pilot in the blockbuster Independence Day, in which he exclaimed the famous line "Look what I can do!" just before crashing into a cliff for no discernible reason.

I is for In-A-Gadda-Da-Vida, a seventeen-minute-long song by Iron Butterfly. To put this in perspective, that song is slightly longer than an average Ramones album and twice as long as the career of Bruno Mars. 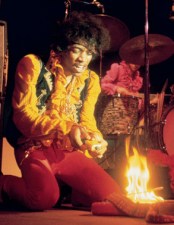 J is for Jimi Hendrix, a guy that became famous for setting a guitar on fire. It is widely accepted that his greatest legacy was inspiring the comedian Gallagher, who improved upon Hendrix's stunt by setting an even larger guitar on fire.

K is for Keyboard, which is essentially a piano for people who want to dress like extras from Blade Runner.

L is for Lenny Kravitz, a guy who produces vaguely old-sounding rock with old-sounding equipment and tired-sounding sounds every five years to keep his profile just high enough to get into fashion shows.

M is for Magic Missile, a deadly spell that flings concentrated bolts of arcane energy at your foes.

N is for Nirvana, a band that made the mainstream aware of an amazing group of talented "alternative" artists. This defined the mid-'90s and influenced a generation of horrible, shitty people who ruined everything in the 2000s.

O is for Opera, which is less of an actual musical thing and more of a convenient touchstone for film and television writers. Operas can be used as events to show how rich and stuffy characters are, and also as something that uncultured male characters can groan about as their wives berate them. Also see: Ballet, musical, orchestra.

Q is for Queen, that group that shows up on American Idol from time to time. I think they're the house band.

R is for Rap, a style of music in which someone holds a microphone and hunches forward as they speak. It seemed to be gaining in popularity, but an older and not casually racist generation clucked their tongues in disgust and shook their heads with such force that young people changed their minds and rap became irrelevant.

S is for Slap Bass, which is the only acceptable method of playing the bass guitar. A bassist should always hike the instrument up until its top is level with his shoulders, should continuously thrust his head forward and back, and should always be staring longingly at one of his bandmates.

T is for Turntable, the instrument you play when you want to wear headphones and nod while looking vaguely disinterested. The turntable was invented for rock groups that enjoy having random scratchy sounds and short loops of half-second sounds.

U is for U2, a charitable organization with alleged ties to the music industry. Their song "Sunday Bloody Sunday" is about eighteen actors suffering head wounds while portraying Spider-Man in a single performance of U2's Spider-Man Broadway musical.

V is for Violin, otherwise known as the tiny upright bass. Because it is so small, the sounds it produces are higher-pitched than a traditional bass. In spite of this shortcoming, the instrument remains popular with musicians who cannot remember how to play by touch and need to see the strings at all times.

W is for Wolfgang Amadeus Mozart, a classical composer best known for being Austrian. He left behind music that has stood the test of time, but we can only dream of how delightful his Arnold Schwarzenegger impression would have been. 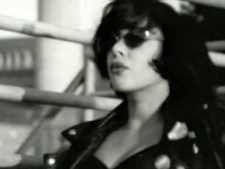 X is for Xylophone, which is simultaneously the least-used instrument and the most-used word when people need to come up with something that starts with an x.

Y is for Young MC, whose "Bust A Move" remains awesome and has a video featuring Girl With Short Hair And A Stop Sign On Her Short Shorts, the greatest of all attractive women in music videos.