Liam Gallagher's contributions to the medium of assholery far outweigh his contributions to music. Oasis was a decade-plus shoving match between brothers set to a score by the Monkees, occasionally punctuated by Liam stomping away then returning to grab his brother in a headlock.

The man's actions are cartoonishly self-centered and far funnier than anything that Russell Brand does in Get Him To The Greek, though the same can be said of Kurt Cobain's suicide. This is the guy who pulled out of a taping of MTV's Unplugged at the last moment only to drunkenly heckle his own band during the performance. He once reached out of his car window to push a man off a bicycle. The dude accepted an award, then thanked everyone in the band but his brother, who wrote the music that made them famous.

Liam's dick moves are so numerous and varied that most of his finest work slips through the cracks. British newspapers do, after all, only have so much space and ink. With that in mind, I'd like to talk about some of Liam Gallagher's best and most underrated dick moves.

Before a performance in 1997, Liam demanded to be paid in tears from the venue owner's children. Between each song Liam would glance into the audience to confirm that the youngsters were crying before continuing. He capped off the curtain call by detonating a hidden suicide bomb vest, killing everyone in the arena. 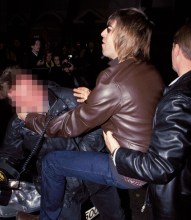 Liam's run-ins with the media are numerous. He punched out dozens of photographers, including a woman with National Geographic who was perched in a tree snapping photos of hippos in the African savannah. When asked about the incident, he simply shrugged and claimed that his actions were "Misinterpreted by the media, as usual. You guys write whatever you want to write. As usual. Go ahead. I'm tired of playing your games."

During the title match of the 2006 World Cup, a blimp belonging to Liam hovered over the stadium. The craft circled for two hours as Liam intermittently relieved himself on the crowd below. Making this act especially inconsiderate was the fact that Liam intentionally aimed for the designated No Sky Urination seating sections.

Researchers at the CERN large hadron collider have reported multiple incidents involving the singer. Though Liam has never been issued a security pass, he has shown up in the deepest part of the facility dozens of times in the last two years, bumping scientists' elbows as they attempt to jot down important data or shouting random numbers while they work out complex equations.

Though his band's relevance has faded, the press' love for controversial Liam Gallagher quotes seems to only be growing stronger. Already a complete prick, the man has somehow taken his craft to new heights by bashing upcoming artists and celebrities that encroached upon his spotlight.

On Radiohead: "Absolute wankers. Their music sounds like a dog grew a pair of hands then used those hands to press the play button on a really bad CD. They seem like the sorts of blokes that would sit around and cry over this or that. No. Just stop crying. Stop everything. Go away. Can't stand them!"

On ZZ Top: "All the beard in the world can't cover the fact that you are musical rapists. Go back to your hammocks, you flatbread-loving sunglasses men."

On Smash Mouth: "Good band. The singer's fascination with eggs is a little disturbing, though."

On the Nintendo Wii: "It's for babies. Give me real games, not infant peek-a-boo crap. At least it isn't a $uck-Box, I suppose." 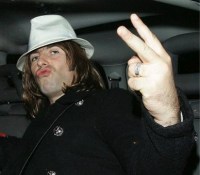 On director Martin Scorcese: "Got lucky with Dog Day Afternoon. Guy's a hack. Have you seen what he did to Alvin And The Chipmunks: The Squeakquel? All the lore and characterization established in the first movie ... just tossed aside. Shameful. I'm really hoping the third is going to get the series back on track."

On our universe, and the rules that govern reality as we know it, allowing life itself: "Sod off."

My favorite Liam Gallagher moment was so incredibly vile and had such a widespread impact that its relative obscurity is baffling. After a night out on the town in 2005, Liam staggered home and yelled for his laptop. Calling upon his tremendous influence in the worldwide entertainment industry, he fumbled with the keys until an e-mail to some of his most powerful contacts began to take shape.

The content of that message? "There needs to be more movies and television programmes and books about vampires and whatnot. Mebbe some werewolves. Get on this shit."