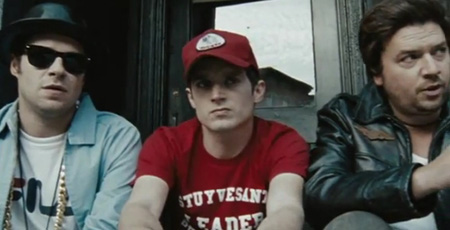 say hello to the b-boys' nastiest rhymes yet! ('nasty' meaning 'good,' not sex stuff that demeans women, like when those other rappers talk about ho's.)

You've seen the Beastie Boys' "Fight For Your Right Revisited" video, haven't you? If you haven't, you should. It's hilarious, right? All those cameos? And it's a pretty good conceit, poking around with the whole notion of "what would have happened if the B-Boys would have remained complete goofballs for the past quarter-century?"

After all, it's been pretty impressive to see how much the Beastie Boys have grown and matured since Licensed to Ill. Sure, they raised the bar on hip-hop production techniques and all that with Paul's Boutique, but what's been truly amazing is how these three have just kept stepping up their game. I mean, To the Five Boroughs? That was some crazy, hardcore-intellectual shit, right? And the way Hello Nasty busted out that retro Poor Righteous Teachers vibe?

Can you argue with the diversity in the Beastie Boys' post-Licensed catalog? At times, the way these guys have whiplashed between styles and attitudes has been dizzying, almost like Prince and Bowie decided to explode Nietzsche's philosophies into a working musical model. There are the cuts with the beer-soaked laughs, the tracks with the brick-heavy party beats, the songs that show off how the Beasties actually play their own instruments and used to be in a punk band ... yeah, there's all of that shit. They're All Over The Map. 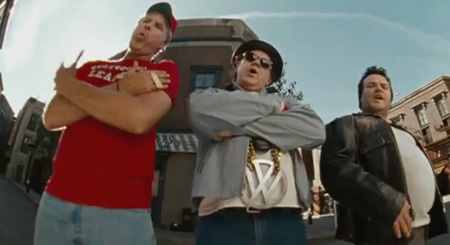 the beasties drop their illest communication EVER, bustin' out vintage tracks that could've come right off the racks of paul's boutique.

So it's a good thing that, after being on the vanguard of hip hop's innovation and expansion over the past 25 years, the Beastie Boys are finally giving us fans a break and getting back to their roots with Hot Sauce Committee, Pt. 2. The loose sense of fun that permeated the "Fight for Your Right Revisited" short film gave us some sense of how goofy and retro-minded Hot Sauce would be, but the album itself really goes all out. Just like Will Ferrell popping out of a time machine as the Ghost of Ad-Rock Future in that short, the tunes on Hot Sauce boom out of your speakers to remind listeners that, although the Beastie Boys have been on the edge of hip hop's avant-garde for years now, these Boys still know how to party.

Who would expect a line like "Party on the left, party on the right/Make some noise if you're livin'" from these guys after all these years of experimentation? And it's right there on the first track! Like some sort of statement of intent, "Make Some Noise" opens the album as if to say "Hello world. This Beastie Boys album is going to sound like exactly what you think of in your head when you think 'Beastie Boys album.'" Which is a good thing, because, again: Beastie Boys are always so full of surprises.

Back in 2008, when promoting The Mix-Up, Mike D said: "Hip hop is what we grew up on, and it continues to be one of the only forms of music left that strives on evolution and innovation." But there is very little on Hot Sauce that points toward any evolution or innovation on behalf of the Beasties. Sure, asking Santigold and Nas to make guest appearances is revolutionary and completely bizarre, and "Ok" dabbles in some DEVO-esque nerditry, but everything else on this album finds the the Beasties turning their back on their experimental side in favor of straightforward party-time jams, bro. 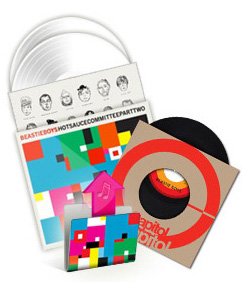 Like they promise on "Long Burn the Fire," the Beasties are back to "make you sick like a Kenny Rogers' Roaster," which is an amazing line, because it makes it clear that these guys are spitting out incredible rhymes like so many pieces of food from a chain that's been bankrupt for the past decade. DON'T DRAW ANY PARALLELS though. Just because the Beasties are dipping into their own bag of sonic tricks - referencing "Hey Ladies" on "Too Many Rappers" is some super-meta shit, y'all - doesn't mean they're out of ideas. It just means their ideas are so dope (kids still say "dope," right?) that they can do whatever they want with old-ass ideas and still make 'em sound new.

You may think that it's old and sad for these dudes in their mid-40s to be rapping like they're 18-year-old hooligans, but that's your problem if you can't see how clever and classic and COMPLETELY NON-REDUNDANT Hot Sauce Committee, pt. 2 is. I mean, they're still working with Mixmaster Mike and Money Mark. And they're still reminding us that they live in New York City. And they really did release a track called "Funky Donkey" in 2011. It all comes together to make this new Beastie Boys album a work that's so self-referential, so mindful of its past, and so steeped in pop-culture history that it's very nearly postmodern. Or, there's the slight possibility that, rather than being a postmodern piece of art, it's just a tired, unnecessary, and slightly unseemly piece of uninspired crap. JUST MAYBE.