When I told some guy what I'd be writing about this week, he asked "Porcupine Tree, isn't that a jam band?" No, jam bands play meandering 10-minute songs about hippie shit like "free love," whereas Porcupine Tree, um... 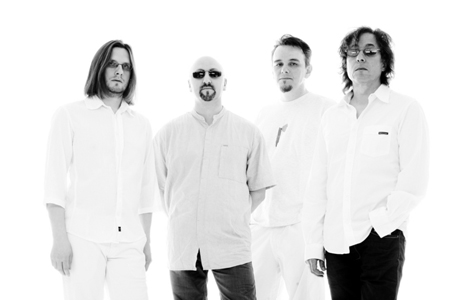 Porcupine Tree is whiter than white.

Prog has become a fringe genre, with a listenership consisting entirely of a) musicians b) people in wizard's hats. But the mainstream listening public used to be a lot more tolerant of prog, and not just stuff like Styx and "Owner of a Lonely Heart." For example, the 1978 Rush album Hemispheres was structured the same way as Porcupine Tree's latest release The Incident, with a side-long song cycle accompanied by a few shorter unrelated tracks on side two. Rush's first-side song is called "Cygnus X-1 Book 2: Hemispheres," and it's about astral travel and Greek mythology and someone named Cygnus. The album also contains a nine minute song called "La Villa Strangiato," which the band preemptively subtitled "An Exercise in Self-Indulgence." This record went fucking platinum.

These days, new prog songs don't get played on the radio, and the genre has spent decades as a punchline in the critical community. Whenever you see a critic engage in some over-the-top prog bashing, like mixing and matching Spinal Tap Stonehenge references with Dungeons and Dragons jokes, or making a big deal out of thanking the Ramones for killing off Genesis, or whatever, they're probably overcompensating for their secret love of uncool shit from past generations. Critics know that if they buddy up with hip bands, they can bask in reflected cool and maybe even pick up a stray groupie. By contrast, if you ally yourself with prog, you'll just end up standing next to a bunch of men who look like you, only older, all pondering mortality as you watch a chair-bound Robert Fripp play random crap.

I'm too old and too secure in my superior music knowledge to give a fuck what anybody thinks about my listening preferences, so I embrace the geekiest shit being made, basically anything with "technical" in the description. I spend my Saturday nights alone doing push-ups and listening to Necrophagist, and my Sunday afternoons involve daydreaming fancifully while swimming in a cereal bowl of fruity lyrics about yellow jesters and black queens and crimson kings. I had high hopes when I first heard about Porcupine Tree, given the group's song lengths and its gay-as-fuck name. But unfortunately, this turned out to be tasteful prog, the most boring of all music's oxymorons.

Muted metal works occasionally when it focuses on atmosphere, and muted prog might, too, except the mood Porcupine Tree chooses to convey is "earnest poignancy." They also play occasional hard-rock riffs that someone who's never heard metal might describe as metallic, and they display a wry sense of humor, best exemplified by naming a punishingly interminable 11-minute song "Time Flies."

Prog songs should be oblique, a befuddling spew of words as abstract as the music accompanying them. Or they can be linear, as long as they're following a sprawling mythological narrative that takes years to conclude. Porcupine Tree writes obvious lyrics and unchallenging melodies. It's sensitive, too, with folksy harmonies and jangling acoustic guitars, and there is no reason for prog to ever be sensitive, because there are no women in this realm.

I spoke with Porcupine Tree singer Steven Wilson a few years ago. He talked about how Porcupine Tree's music was "innovative in a way that people who like 15-minute guitar solos don't appreciate," and how he "never liked that sci-fi bollocks. I've always been more interested in what's going on in this world rather than some fantasy Hobbit land." These are sane, rational sentiments, but prog rock is the last genre sane, rational musicians should pursue. Without the lyrical craziness and symphonic bombast, you're just playing pop tunes that won't fucking end.