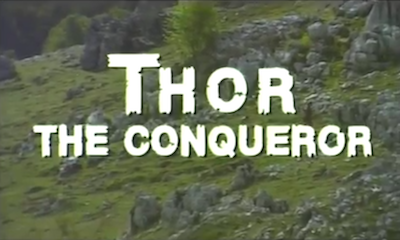 Overview: Remember all those great Italian “spaghetti Western” movies? Well, this is a “spaghetti caveman/barbarian” movie, which is exactly as good an idea as it sounds like.

The Case For: If you’re responsible for rehabilitating a group of feral children raised by mentally handicapped deer, Thor makes a great sex education/general life-coaching movie, since it really starts slow with the basics like “what is a woman” and “is a woman food”.

The Case Against: Titular barbarian Thor is almost as dumb as the Barbarian Brothers, meets people wearing headwear almost as stupid as Gor, and likes to commit sensual rapes almost as much as Deathstalker. So go watch one of those movies instead of Thor the Conqueror, because why settle for second place? 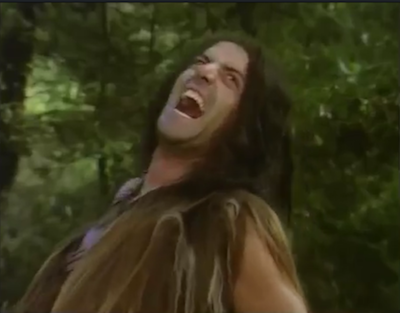 Goddamn it, why can’t we ever just get to watch a nice, normal barbarian movie? How can so many completely different groups of people keep fucking up such a basic recipe? Find some a muscle-bound freak whose only requiring acting ability is grunting on cue, give him a big fake axe, and send wave after wave of scantily-clad women and filthy, screaming extras with swords and rocks at him. Maybe throw in some kind of weird-looking sorcerer whose magic powers consist entirely of oversized pyrotechnics, if you’re feeling ambitious. Cut, print, wrap.

Regular readers of our column will know that our most recent forays into the barbarian genre haven’t gone so well, but we had high hopes for a return to form with Thor the Conqueror. For all of the many unforgivable things wrong with Deathstalker, at least they more or less knew what a barbarian movie is supposed to look like. The hyper-Italian creators of Thor started off in the right direction by dousing their star’s pectorals in gallons of olive oil at all times, but that’s where the (relatively) good decisions stop for good.

The action in any barbarian movie necessarily has to revolve around the lead traveling the world and doing barbaric things. Unfortunately, Thor’s credentials are...let’s just say they’re a bit mixed. He starts off strong by surviving an arrow to the chest about five minutes after being born, but once he’s all grown up his most impressive combat victories include some roving bandits that he beats to death with his lunch, a badly-decomposing animated corpse, and a group of scrawny women who can barely lift their fake prop swords.

Maybe part of Thor’s problem is that his standard-issue mystical advisor isn’t exactly the Wizard from Conan. Instead he gets Etna, Arch Magus of Ridiculous Shoulderpads, who can turn into an owl and summon a horse. We’re not saying those are completely useless skills, but Thor could have just found a regular owl and a regular horse and done perfectly fine for himself, honestly. At least then it wouldn’t be so incredibly creepy when they stare at him constantly, especially when he finds a woman:

We have to give Thor some credit for soldiering on through both that stare and the creepy laugh, the combination of which would give most testosterone-riddled sex-starved cave dwellers immediate and permanent erectile dysfunction. At least Etna does spend a little time imparting his otherworldly wisdom to Thor, with amazing lessons like “what is a woman?”, “a woman is not food”, and “hurry up and rape that woman faster, come on, don’t leave me hanging here bro.”

What we’re saying is that between the mystical companion who mainly just provides a one-man traveling seminar series “Sixty Minutes to Being a Better Caveman Rapist”, and his inability to beat anyone in combat who weighs more than half of what he does, Thor doesn’t quite feel like a legendary Conqueror descended from the Gods to us. Also, his wig is pretty lousy. But he does have one thing going for him:

Yes, the climactic battle scene of the movie involves Thor finding a horse, and then doing the medieval equivalent of parking-lot donuts in front of his enemies, causing them to flee in terror. Also, what the fuck did that asshole peeping wizard just say about the horse?

“Centuries from now, he’ll be called a horse. A horse adds to your force!”

We’re not going to top that implosion of stupidity, so we’ll just stop right here. Thor the Conqueror: a movie only to be watched by barbarian completionists (we shudder to think there is such a person) or badly confused Norse mythology buffs.