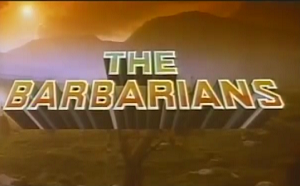 Overview: This movie is pretty much the lost SNL movie adaptation of Hans and Franz.

The Case Against: We know that barbarians are generally known for chopping first and thinking never, but even by those standards the stars of The Barbarians are unbelievably retarded. 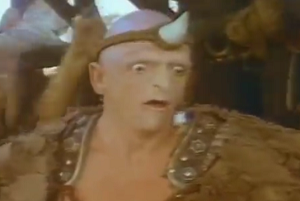 This week, we take a look at another true and seminal classic of the oily 80s barbarian genre: John Norman's Identical Twin Retards of Gor ...er, The Barbarians. Swordplay, sorcery, glistening mullets, David Bowie lookalikes, disco dragon disembowelment, rippling neck-abs, cleavage in places you didn't know cleavage was even anatomically possible -- this movie has it all, and then some. But what you might not be expecting is that The Barbarians is so much more than just another delightfully juiced-up Conan clone forced through the fine mesh screens of carnival magic, cross-cultural pitfalls, retarded moose noises, equally retarded Italian directors, and what IMDB refers to as "beefcake martial arts" over and over until no longer recognizable as something any living person could have ever conceivably understood/enjoyed/related to in any way.

It's honestly hard to know where to start with The Barbarians, there's so many different ways in which it's a steroid-riddled train wreck. Maybe we'll get the relatively positive details out of the way first. Like Merlin: The Return, this movie manages to prove the broken-clock principle by somehow conjuring up one entertaining scene, which consists of an opening high-speed carnie caravan chase and massacre extravaganza. Also like Merlin: The Return, the 10 minutes of mild amusement will only make the coming scenes that much harder to take.

The plot, such as it is, revolves around a caravan of traveling gypsy carnies called the Rednecks, or Rezniks, or Ragbacks or something, and the amazing gem of unlimited power that's stolen from them by the Dirtmaster. What is this incredible, army-leveling jewel, you ask? Why it's an almost sorta semi-magical bellystone - a ruby one to be exact - a bellystone which contains within it the ancient and unspeakable power of...laughter? What the fuck? Well ok, it's not just laughter, there's a little more to it than that - like juggling, for example. And maybe a bit of sword swallowing. That's about it though[1].

Naturally this is the kind of rare treasure men would be willing to kill for, especially the sort of men who are already more than willing to kill who knows how many times just to nab themselves a title like fucking Dirtmaster, and...well, we think you can see where all this is going:

Thanks to the mystical ruby powers, the Ripleys are welcome wherever they go. Well okay, maybe those two fuckers aren't so welcome, and obviously for good reason; more on them in a bit. First we have to properly introduce their nemesis, local unstoppable tyrant Kadar, a.k.a. Ricardo Montalbowie. The road to Kadar's success is paved with the aforementioned broken wagons and clown corpses. The Reeboks manage to chuck the ruby off to the side somewhere, but at least as a consolation prize Kadar gets a few choice new cuts of slave meat to add to his dirt pile, rapenasium, and conveniently-adjacent Conan-approved training montage children's deathsports arena.

[1] It's not just any old ruby, by the way, it's specifically a belly stone, and whosoever jams it into their bellybutton shall become Rightful Queen of the Clown Brigade, amen. Really, that happens in The Barbarians, we didn't just pull it out of a rejected draft for an X-rated all-female Sword in the Stone remake or anything.